CO2 alarmists want to use Doggerland as a morality tale to scare us about rising sea levels in this century and the next. Because it certainly demonstrates the perils of climate change.  As usual though, they fail to put the past into an historical context, because that would destroy their narrative.

First, what is the story of Doggerland?

When signs of a lost world at the bottom of the North Sea first began to appear, no one wanted to believe them. . .A resourceful amateur paleontologist named Dick Mol persuaded the fishermen to bring him the bones and note the coordinates of where they had found them. In 1985 one captain brought Mol a beautifully preserved human jawbone, complete with worn molars. With his friend, fellow amateur Jan Glimmerveen, Mol had the bone radiocarbon-dated. It turned out to be 9,500 years old, meaning the individual lived during the Mesolithic period, which in northern Europe began at the end of the last ice age some 12,000 years ago and lasted until the advent of farming 6,000 years later. “We think it comes from a burial,” says Glimmerveen. “One that has lain undisturbed since that world vanished beneath the waves, about 8,000 years ago.”

The story of that vanished land begins with the waning of the ice. Eighteen thousand years ago, the seas around northern Europe were some 400 feet lower than today. Britain was not an island but the uninhabited northwest corner of Europe, and between it and the rest of the continent stretched frozen tundra. As the world warmed and the ice receded, deer, aurochs, and wild boar headed northward and westward. The hunters followed. Coming off the uplands of what is now continental Europe, they found themselves in a vast, low-lying plain.

Archaeologists call that vanished plain Doggerland, after the North Sea sandbank and occasional shipping hazard Dogger Bank. Once thought of as a largely uninhabited land bridge between modern-day continental Europe and Britain—a place on the way to somewhere else—Doggerland is now believed to have been settled by Mesolithic people, probably in large numbers, until they were forced out of it thousands of years later by the relentlessly rising sea. A period of climatic and social upheaval ensued until, by the end of the Mesolithic, Europe had lost a substantial portion of its landmass and looked much as it does today.

The most rapid rises of sea level were on the order of three to six feet a century, but because of the variable topography of the land, the flooding would not have been even. In areas as flat as modern-day East Anglia, a six-foot rise could have shifted the coast inland by miles; in hillier places, less. Down in low-lying Doggerland, the rising sea turned inland lakes into estuaries. Gaffney’s digital reconstruction shows that one in particular, the Outer Silver Pit, contains massive sandbanks that could only have been created by fierce tidal currents. At some point the currents would have made it dangerous to cross in a log boat, and eventually, created a permanent barrier to once familiar hunting grounds.

Some 8,200 years ago, after millennia of incrementally rising seas, a massive release of meltwater from a giant glacial lake in North America, called Lake Agassiz, caused sea levels to jump by more than two feet. By slowing the circulation of warm water in the North Atlantic, this influx of frigid water triggered a sudden plunge in temperature, causing Doggerland’s coasts—if any remained—to be battered by frigid winds. If that were not enough, around the same time, a landslide on the seafloor off the coast of Norway, called the Storegga slide, triggered a tsunami that flooded the coastlines of northern Europe.

What about our future?

Alarmists like Jim Hansen are calling for sea levels to rise 3 to 6 feet this century, even 10 feet on an especially feverish day.  But when those rates happened, there were no fossil fuel emissions.  Moreover, that amount of rise is not happening any more. 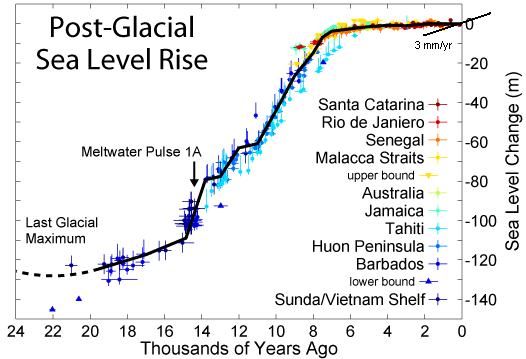 The flooding of Doggerland coincides with the rapid sea level rise up to about 8000 years ago, and the modern farming period beginning about 6000 years ago.  Sea level has been gently rising a few mm/year up to the present, including the recovery from the Little Ice Age.

Of course anything is possible, but without an acceleration unprecedented in the last 6000 years, the rise will be about a foot/century.