After showing resilience in September, Arctic ice growth faltered in October. The graph shows MASIE ice extents in 2016 in comparison with other years and with SII.

Last year was above average recovery, while both SII and MASIE showed October 2016 well below average, and dropping down to 2007 levels.  Interestingly, MASIE and SII show virtually the same October average extent at 6.1M km2. This amount is 10% below the MASIE Oct. ten-year average, but that figure is 21% below SII ten-year average for Oct.

The table shows by region the differences from ten-year MASIE averages for day 305, October 31.

Clearly in the table and in the image at the top, ice is missing mostly in the BCE region on the Asian side (Beaufort, Chukchi, E. Siberian) and in Kara and Barents on the European side.

What’s Up with Arctic Ice

For some answers let’s turn first to Dr. Judah Cohen of AER.  His analysis is thorough and interesting (here).  Excerpts:

Arctic sea ice reached its annual minimum on September 10th. Despite an initial spurt of ice growth, overall Arctic sea ice has been expanding at an anemic rate. One area to note on the North Atlantic side is in the Barents-Kara Seas, where negative sea ice anomalies have been growing (Figure 13). Recent research has shown that regional anomalies are important and the sea ice region most highly correlated with the winter AO is the Barents-Kara seas region where low Arctic sea ice favors a negative winter AO. Given that sea ice is running well below normal, this currently favors further expansion Eurasian snow cover in the coming weeks, followed by a strengthened Siberian high and a weakened polar vortex/negative AO this upcoming winter.

Additional context is provided by Ted Scambos in an article at Discover Magazine (here).  Excerpts below.

An animation of satellite images shows differences in sea ice in the Beaufort Sea off Alaska’s coast between Oct. 14, 2014 and Oct. 12, 2016. The first image, captured by the Terra satellite in 2014, shows extensive snow cover around Alaska’s Brooks Range (to the left), and sea ice forming offshore. The second image, from the Aqua satellite in 2016, shows the same region — mostly snow- and ice-free. (Images: NASA Worldview. Animation: Tom Yulsman)

Arctic sea ice has been been growing much more slowly than average during October. Its geographic extent is now in a rough tie with 2007 and 2012 for the lowest in the satellite record for this point in the year.

According to Ted Scambos, a senior research scientist at the National Snow and Ice Data Center, two big Arctic storms in August contributed significantly to the very low minimum extent in September. They probably did this by “breaking up the ice and stirring a trace of warmth up from deeper levels (5-10 meters below the surface),” Scambos says.

Not too long after the storminess subsided, the surface water refroze fairly quickly, accounting for the rapid expansion of sea ice after the low point in September sea ice

That rapid freeze-up happened in the heart of the Arctic Ocean, where temperatures would normally be coldest. Meanwhile, more at the periphery — particularly in the Barents, Kara and Laptev seas — “the ice edge has barely changed,” says Julienne Stroeve, who also serves as a senior research scientist at NSIDC.

Sea ice has expanded somewhat in the Beaufort Sea, off Alaska’s north coast. But the edge is still far short of the long term average in the region.

Why has Arctic sea ice been growing so slowly in the past couple of weeks? Once again, Scambos thinks the warm sea surface temperatures that have been retarding ice growth also have been warming the air directly above the water.

“It is not surprising that it is extremely warm in the weeks following near-record minimums [in sea ice extent], because open water beneath the atmosphere buffers the air temperature at near the freezing point for several weeks until several centimeters of ice are formed,” Scambos says. “In this case, I would say that the high air temperature anomaly is an effect, not a cause, of slow sea ice growth, and that the leading cause is ocean temperature.”

Snow cover advance across Eurasia continued consistently above normal for the entire month of October. Also because much of the advance has occurred at latitudes south of 60°N, the snow advance index is also well above normal. Above normal snow cover extent, especially south of 60°N, favors a strengthened Siberian high and a weakened polar vortex/negative AO this upcoming winter with cold temperatures across the continents of the NH. 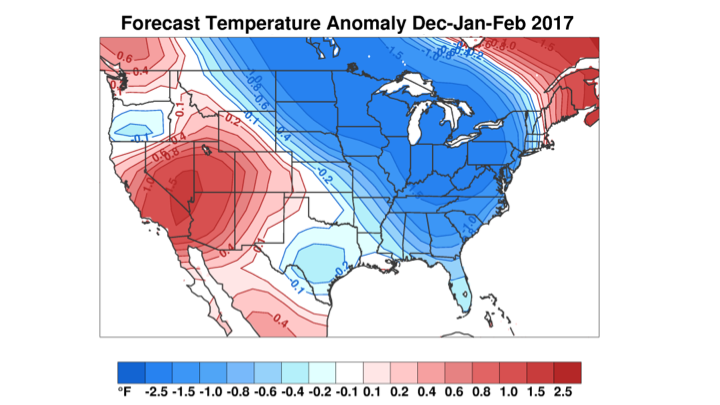 Predicted winter surface temperature anomalies for the United States Dec-Jan-Feb 2016/17 in degrees Fahrenheit. The model is forecasting colder than normal temperatures for much of the Eastern United States, with warmer than normal temperatures for the Western United States. The model uses October Siberian snow cover, sea level pressure anomalies, predicted El Niño/Southern Oscillation anomalies, and observed September Arctic sea ice anomalies. October Siberian snow cover has so far this month advanced at an above normal rate. This is an indication of an increased probability of a weakened polar vortex or a sudden stratospheric warming, and a predominantly negative Arctic Oscillation during the winter and cold temperatures – especially east of the Mississippi. This is a preliminary forecast and not the official winter forecast as the model requires full monthly values for snow cover and sea level pressure anomalies. The forecast will be updated next month. Current forecast produced on October 19, 2016.

Both Cohen and Scambos explanations are consistent with the lack of ice both in BCE on the Asian side (Beaufort, Chukchi, E. Siberian), and in Kara and Barents on the European side.

Warm ocean water reduces ice extents, the air is warmed and moistened, and then snowfall increases. The conditions for winter ice formation are shaping up, though somewhat later than usual, perhaps because of August storm activity.

Lastly, it’s important to realize that two weeks is a short period of time, and Arctic sea ice could start forming up at a more normal rate for this time of year. In fact, that’s what Scambos predicts: “Now I expect that sea ice growth will take a more typical path (typical for the past 5-8 years, at least).”

One more time: Remember the 3 Ws when it comes to Arctic ice extents.  Firstly it’s the Water, and then the Wind circulation, and the Weather.  Air temperatures are an effect not the cause. 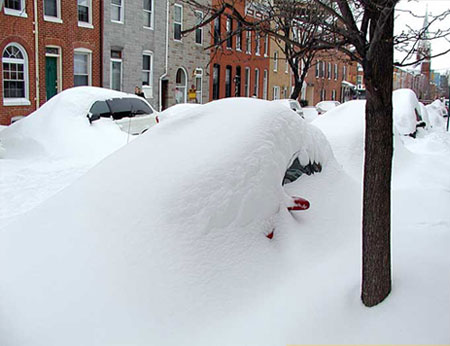 For more on this see:

Arctic Not a Refrigerator