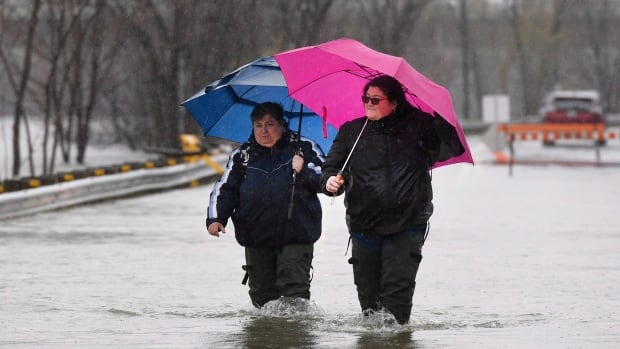 Christelle Lagace-Babim, left, and Elise Lagace walk along Rue Jacques-Cartier Friday, after checking out their home in Gatineau, Que., as significant rainfall continues to cause flooding. (Justin Tang/Canadian Press)

A lot of verbage about global warming/climate change is worse than useless because the parties are using terms whose meaning is vague or equivocal, and thus no meaningful interaction occurs. Alarmists/activists claim climate change is real, man-made, and dangerous (Obama tweet). Skeptics/doubters respond that climate is always changing, has been both warmer and cooler in the past, long before humans did anything.

In addition, climate confusion causes statements like this one recently in the CBC: Gatineau flooding ‘tip of the iceberg,’ climate scientist warns

Swollen rivers and streams have threatened hundreds of homes in the Outaouais thanks to recent heavy rainfall — three times the normal amount since April 1.

University of Ottawa climate scientist Paul Beckwith says that’s due to a changing climate, and says we’re seeing its effects “on a day-to-day basis” in weather patterns.

Beckwith points to an increase in extreme weather events across North America as proof. “We’ve changed the chemistry of the atmosphere and the oceans with our greenhouse gases, so we’re seeing the consequences of this now,” he added. “It’s only the tip of the iceberg, so to speak.”

Such reports mislead people to think of the climate acting like some kind of agent causing the weather to change in ways unfavorable to us. That confuses the relation between climate and weather, as we shall see below.

Fortunately in science things get defined not theoretically but by observations and measurements. In science, weather is defined as the behavior we measure on a daily basis. In fact today’s automated weather equipment monitors the weather constantly. Let us consider an operational definition of weather to be the variables for which data is reported into global databases.

Each National Weather Service has its own additional particulars they track, but the common global definition of weather can be seen in the defined elements from the ECA&D weather data dictionary (European Climate Assessment & Dataset)

Sunshine (SS) in units of 0.1 hour. Total daily SS plus measures of hours for intervals during the day.

Sea Level Pressure (PP) in units of 0.1hPa Daily average PP plus measures for specific times and parts of the day.

Humidity (HU) in units of 1% of relative humidity. Daily average HU plus measures for specific times and parts of the day.

Cloud Cover (CC) in oktas (0 being clear sky, 8 being completely overcast). Daily average CC plus measures for specific times and parts of the day.

Wind Direction (DD) in degrees azimuth for the wind source (that is, a southerly wind comes from 180 degrees.) Daily average DD plus measures for different times of day, and the direction of maximum gust.

Wind Speed (FG) in units of 0.1 m/s. Daily average FG plus measures for speeds at different times and parts of the day.

Precipitation Amount (RR) in units of 0.1 mm. Daily total RR plus measures of amounts for intervals during the day.

Maximum Hourly Precipitation (MXR) in units of 0.1 mm. MXR for the day plus measures of amounts for intervals during the day.

Snow Depth (SD) in units of 1 cm. Mean daily SD plus measures of depths for intervals during the day.

Minimum Temperature (TN) in units of 0.1C. Daily TN plus measures for different times and parts of the day.

Maximum Temperature (TX) in units of 0.1C. Daily TX plus measures for different times and parts of the day. 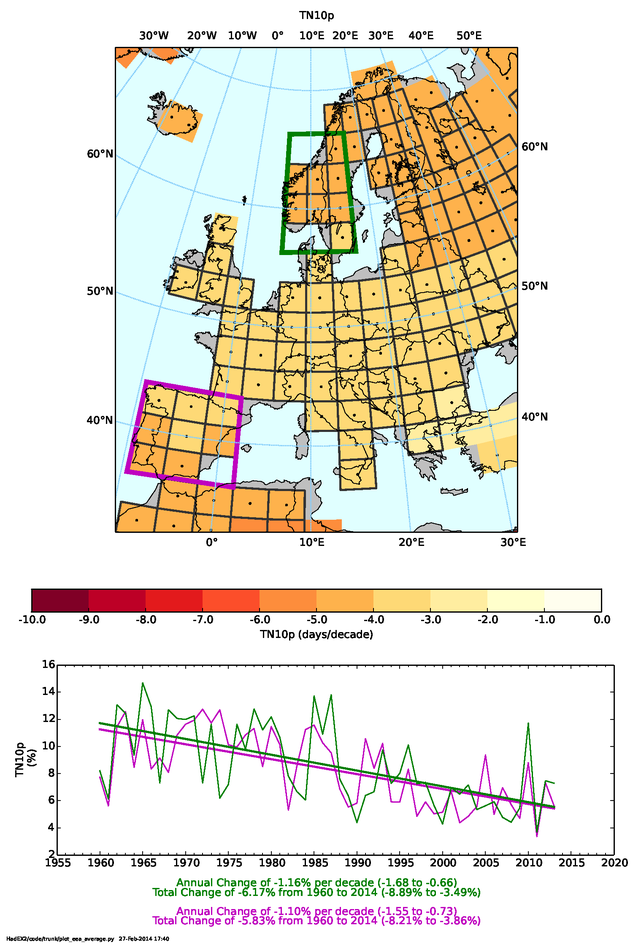 To sort out the confusion between “weather” and “climate”, we can also look at how climate is measured and thereby defined. From the same ECA&D source is a climate indices database which is termed Indices of Extremes.

There is one datafile for each index. Each datafile gives information for all available stations in the ECA&D database. The indices are aggregated over the year, the winter-half (ONDJFM), the summer-half (AMJJAS), winter (DJF), spring (MAM), summer (JJA), autumn (SON) and each of the calendar months.

There are 74 indices grouped into twelve categories corresponding with different aspects of climate change. Some categories come directly from weather elements, while others are derivations.

The 74 indices are statistics built upon weather data, adding patterns of interest to humans. For example, temperature is greatly emphasized by adding various concerns with heat and cold on top of temperature records. Also, a compound category focuses on temperature and precipitation combinations and their favorability to humans.

What is Climate: Categories and Indices

Note that climate is operationally defined as statistical patterns of weather data. Some indices are simply averages of daily weather over long term periods. By convention, a 30-year average is used to define a climate baseline for a location.

Other climate indices are based on value judgments according to human interests. For example, heat and cold include many examples like growing days, good tourism days, heating degree days. In fact, a feature of climate is the imposition of human expectations upon nature, other examples being the sunshine indices Mostly Sunny and Mostly Cloudy days.

Andrew John Herbertson, a British geographer and Professor at Oxford, wrote in a textbook from 1901:

By climate we mean the average weather as ascertained by many years’ observations. Climate also takes into account the extreme weather experienced during that period. Climate is what on an average we may expect, weather is what we actually get.

Mark Twain, who is often credited with that last sentence, actually said:

Climate lasts all the time and weather only a few days.

The point is, weather consists of events occurring in real time, while climate is a statistical artifact. Weather is like a baseball player swinging in the batter’s box, climate is his batting average, RBIs, bases on balls, etc.

What is “Climate Change”?

The usefulness of climate indices is suggested by the last category called compound, where temperature and precipitation patterns are combined. In fact those two factors are sufficient to define distinctive local climate zones..

Based on empirical observations, Köppen (1900) established a climate classification system which uses monthly temperature and precipitation to define boundaries of different climate types around the world. Since its inception, this system has been further developed (e.g. Köppen and Geiger, 1930; Stern et al., 2000) and widely used by geographers and climatologists around the world.

As an example, consider how the island of Hawaii looks with its climate zones indicated:

Note: This image comes from an interactive tool and uses a different color scheme than the global map above.  The table below shows the thresholds by which zones are defined.

The focus is on differentiating vegetation regimes, which result primarily from variations in temperature and precipitation over the seasons of the year. Now we have an interesting study that considers shifts in Köppen climate zones over time in order to identify changes in climate as practical and local/regional realities.  The paper is: Using the Köppen classiﬁcation to quantify climate variation and change: An example for 1901–2010 By Deliang Chen and Hans Weiteng Chen Department of Earth Sciences, University of Gothenburg, Sweden

Hans Chen has built an excellent interactive website (here): The purpose of this website is to share information about the Köppen climate classification, and provide data and high-resolution figures from the paper Chen and Chen, 2013:  For more details on Chen and Chen see the post: Data vs. Models 4: Climates Changing

Chen and Chen provide a data-based definition of “climate change”. Climate zones are defined by past temperature and precipitation ranges observed by humans. The weather datasets and climate indices inform us whether or not the patterns in a place are moving outside the norm for that location. Climate change appears as a shift in zonal boundaries so that one place starts to resemble a neighboring zone with a different classification.  The table above shows the defined zones and thresholds.

The Chen and Chen analysis shows that almost half of climates around the world will get a year of weather outside of their normal ranges. Getting a decade of abnormal weather is much rarer. True climate change would be a shift enduring over a 30 year period which has been observed in less than 10% of all climate zones.

Climate is a term to describe a local or regional pattern of weather. There is a widely accepted system of classifying climates, based largely on distinctive seasonal variations in temperature and precipitation. Depending on how precisely you apply the criteria, there can be from 6 to 13 distinct zones just in South Africa, or 8 to 11 zones only in Hawaii.

Each climate over time experiences shifts toward warming or cooling, and wetter or drier periods. One example: Fully a third of US stations showed cooling since 1950 while the others warmed. It is nonsense to average all of that and call it “Global Warming” because the net is slightly positive. Only in the fevered imaginations of CO2 activists do all of these diverse places move together in a single march toward global warming.

For more on measurements and science see Data, Facts and Information

This post was focused on the distinction between weather and climate, so extreme weather events were not discussed, since by definition such events are weather. Still the quote at the beginning shows that activists are working hard to attribute attention-grabbing events as proof of global warming/climate change.

Mike Hulme wrote a series of articles describing the unsuccessful effort to link extreme weather to climate change and said this:
In recent decades the meaning of climate change in popular western discourse has changed from being a descriptive index of a change in climate (as in ‘evidence that a climatic change has occurred’) to becoming an independent causative agent (as in ‘climate change caused this event to happen’). Rather than being a descriptive outcome of a chain of causal events affecting how weather is generated, climate change has been granted power to change worlds: political and social worlds as much as physical and ecological ones.

More at X-Weathermen are Back