One month into her new job as Canada’s Governor General, Julie Payette was the keynote speaker at the ninth annual Canadian Science Policy Convention in Ottawa Nov. 1 where she urged her friends and former colleagues to take responsibility to shut down the misinformation about everything from health and medicine to climate change and even horoscopes that has flourished with the explosion of digital media.

“Can you believe that still today in learned society, in houses of government, unfortunately, we’re still debating and still questioning whether humans have a role in the Earth warming up or whether even the Earth is warming up, period,” she asked, her voice incredulous.

As the photo suggests, Payette has an impressive CV, but she appears not to know the difference between being Governor General and a Liberal cheerleader. I referred to “climate axe” purposely because leftist politicians in both Canada and US have employed global warmism as a wedge issue to split the electorate in their favor by marginalizing the skeptics.

Firstly, her speech shows her ignorance of the people she represents. The most recent survey of Canadian public opinion on global warming gave this result:

Sponsors of the survey and media reporting (eg. CBC) believe 100% in man-made global warming, so were disappointed in the public’s dissent and tried to hide and misconstrue the survey results. But buried in the details is the above finding showing that Payette has thrown under the bus more than half of Canadians.  Even in her home city Montreal, hotbed of climatism, she belittles 40% of the population. Details of the survey are in Uncensored: Canadians View Global Warming

Secondly, pronouncements on scientific issues should be based on personal critical examination of the facts for and against a position. Her space experience was made possible by pioneering NASA scientists who have done their homework and come to the opposite conclusion.  She is also dumping on colleagues who have actually studied the data. 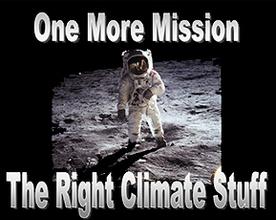 NASA retirees organized TRCS research team in the Spring of 2012 and developed a website that documents our progress into understanding the AGW issue over the last 5 years. http://www.TheRightClimateStuff.com We set as our initial goal: “Determine to what extent unrestricted burning of fossil fuels can cause harmful climate change.” We have concluded that the computer model analyses used in the IPCC reports, estimating global warming increases up to 4.5 degrees C for doubling atmospheric CO2 concentration, are in error because the models do not agree with empirical data as required by the principles of the Scientific Method. Our analysis, based on principles of conservation of energy, uses well-known, measured data and predicts no more than 1.2 degrees C increase in global warming due to burning all currently known world-wide reserves of fossil fuels. Our simple model is validated by the rigor of its derivation and agreement with 167 years of empirical data since 1850. This analysis was completed with the same rigor and attention to detail used in our manned space program, where the lives of astronauts depended on our accuracy.

Excerpt with my bolds from letter to President Donald J Trump by The Right Climate Stuff Research Team. Led by Harold H Doiron, signed by 22 others including Astronauts Walter Cunningham and Charles Duke.

Has Payette done her own analysis and written a report, or is she taking someone’s word about global warming theory and its effects? That would be a secondhand opinion, an appeal to authority rather than science.

Thirdly, it is not the Governor General’s role to champion political correctness. Rex Murphy explains it clearly in his National Post article  Governor General appoints herself umpire of questions of faith and science  Excerpts below with my bolds.

In this wonderfully diverse Canada that Ms. Payette now represents, was it her intent to ridicule the religious beliefs of so very many faiths?

Merely as prelude, we should point out that the difference between elected and selected is more than a matter of the letter “s,” and add that being assigned to a state ceremonial office does not confer oracular status on a person. On the first, it must be clearly acknowledged that it is the elected, not the selected, who argue and debate the issues of the day and determine the worth and truth of the policies that emerge from that process. They write the laws: the GG, as ceremonial totem, the stand-in for an absent Regent of a hollowed-out Monarchy, affixes her signature to them.

Secondly, elevation to the GG office, delight and honour that it undoubtedly is, does not come with a certificate of intellectual authority, or the prerogative to delimit the scope of inquiry and debate on any issue the Commons or the citizenry may wish to engage. It is not at all evident that Ms. Payette is clear on these points.

Her speech had a scattering, pinball machine trajectory. In the space of a few sentences it went from climate change, to the origin of life, to newspaper horoscopes; from dicta on the “denialism” sometimes confronting the first, to the religious understandings of the second, and the vacuous absurdity of the third. The problem with this neat triad is that, while a tirade against horoscopy might be perfectly agreeable to most everyone (being a machine gun attack on a whole field of straw men — who reads horoscopes save for feeble amusement?), assertions on life and climate are on another plane entirely.

Naturally, Ms. Payette opined on climate science, and equally naturally placed inquiry and skepticism on what is proclaimed the consensus of that but emergent discipline as denialism – thereby endorsing the ugliest rhetorical term in this entire, explosive issue, which summons the butchery and cruelty of History’s greatest crime as a spurious backdrop to debate on an unresolved public issue. We have a right to expect better from Her Majesty’s representative.