We’re finally told what the carbon tax will cost us. Are you sitting down?
Kenneth Green writes in Financial Post.  Excerpts below in italics with my bolds.
Households in Alberta, Saskatchewan and Nova Scotia will be hit with more than $1,000 of carbon tax per year, while those in British Columbia, Quebec and Manitoba will pay around $650

It took some poking and prodding and (finally) committee testimony, but now we know what the bill will be for a $50-per-tonne carbon tax, similar to one the federal Liberals plan to impose. In a report to the Senate Standing Committee on Energy, the Environment and Natural Resources, University of Calgary economics professor Jennifer Winter revealed the bottom line of a $50-per-tonne carbon price. 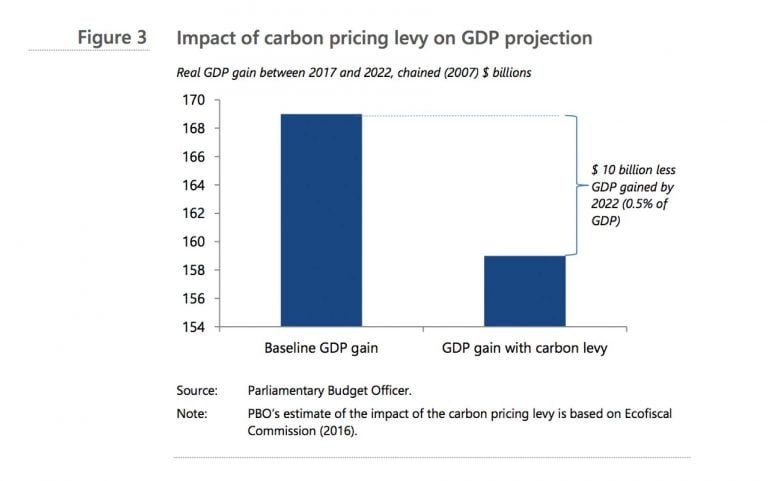 Tax advocates say it is a small % of GDP. But it is still $10 Billion extracted from Canadian households.

Using energy-consumption data from Statistics Canada, and imputing prices from average household expenditure on transportation fuels and provincial gasoline prices, Winter calculated the impact of a a $50-per-tonne model of a carbon tax on a typical Canadian household across different provinces. Far from being painless as advertised, the costs to households will be significant.

But it gets worse, since most experts say carbon prices must continue to increase sharply to effectively lower emissions. At $100 a tonne, for example, households in Alberta will pony up $2,223, in Saskatchewan they’ll pay $2,065 and in Nova Scotia, $2,240. In fact, at $100 a tonne, the average price for households in all provinces is well north of $1,000 per year.

Already across Canada, particularly in the Maritimes, a significant number of households fit the definition of “energy poverty” — that is, 10 per cent or more of household expenditures are spent simply procuring the energy needed to live (to power the home and transportation). In 2016, the Fraser Institute measured energy poverty in Canada and found that when you add up the costs to power the home and cars, 19.4 per cent of Canadian households devoted at least 10 per cent or more of their expenditures to energy.