Enjoy a turkey leg over the holiday, but watch out for warmists pulling your leg.

At Boston University website The Brink, two BU communications experts share advice on handling dinnertime squabbles over the validity of climate science:  How to Deal With Climate Skeptics At Thanksgiving Dinner  Excerpts in italics with my bolds.  I also add some comments from the other side of the table. 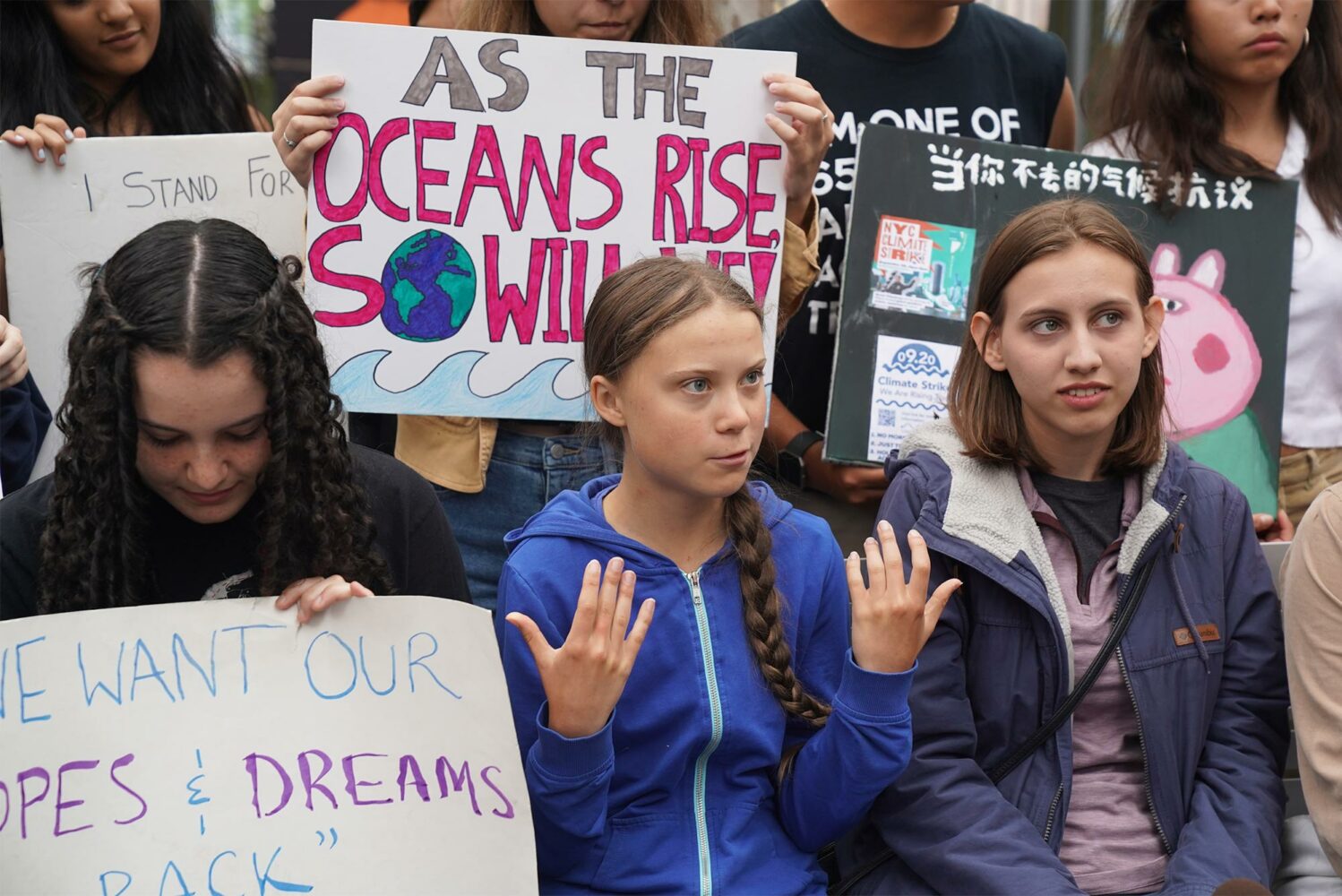 Feel like you’re at a loss for words when a loved one says global warming is a hoax? Arm yourself with advice from BU researchers on how to respond. (Greta Thunberg would be proud.) Photo by Bryan R. Smith/AFP via Getty Images.  [Why should we care about likes from an uneducated 16 year old Swedish child?]

Ah, the holidays. The time of year for cozy gatherings with family and friends, homemade pie, and festive traditions. Many people will embark on long car rides and trips across state lines to visit loved ones in the hometowns they feel they’ve outgrown. And in between mouthfuls of stuffing and gravy, political gripes and disagreements are almost a guarantee.

You might, for example, hear a grumbling or two about the so-called “climate hoax,” backed up by a statement that our current rate of global warming is nothing but a “natural process.” Uh-oh.

[No one has separated out man-made warming from natural warming, either from the Little Ice Age recovery or from solar and oceanic cycles. Why can’t you admit that?]

At this point, more than half of Americans are now “alarmed” or “concerned” about global warming, but the issue is becoming more polarized. Many people distrust the scientific evidence that humans are responsible for pushing our world’s climate toward its breaking point, despite scientific consensus. So, what do you do if you are in the alarmed majority and want to talk about climate science with people who are disengaged, doubtful, or dismissive of it? What if some of those people are your aunts and uncles, or your mother or father? Is it possible to change their minds if the topic comes up over Thanksgiving?

[How trustworthy are the polls? What was asked, in what context and what responses were allowed?
Do you realize that by appealing to a consensus, you are admitting that the question is a matter of opinion not one of scientific fact?  See The Art of Rigging Climate Polls]

Here’s some good news: you are exactly the right person to talk about climate change with your relatives. You are what communication experts call a “trusted messenger,” which is the idea that people are more likely to believe people they trust and more likely to trust people they are personally connected to. And one of the biggest superpowers you, as an individual, have is the ability to communicate the facts.

[Appeal to social proof: Since it is only a matter of opinion, the majority should rule. “Go along to Get Along.”  Never trust someone who says, “Trust me.” Asking for the proof is only offensive to those who have none.]

To best figure out how to communicate climate science to skeptics, we spoke with Sarah Finnie Robinson, senior fellow at BU’s Institute for Sustainable Energy and founder of the 51 Percent Project, which studies the most effective communications messaging for optimal public engagement about climate science. And we spoke with Arunima Krishna, BU College of Communication assistant professor of public relations, who has spent years studying how people talk about controversial social issues like vaccines and climate change. Here’s their advice for how to prepare yourself for any potential dinnertime squabbling on the topic of climate science.

As the consensus about the climate crisis becomes louder, “there could be a feeling of marginalization,” says Krishna. “In the sense that there is a war against people who don’t want to vaccinate their children, for example.” So, defaulting to lecture mode on sea-level rise is not the best way to break through, since it could feel more like an attack.

[ This sounds tactical: You can lecture later, but soften them up by listening first. And do you realize that sea level is not rising any faster since humans began burning fossil fuels?]

“Sometimes we forget that the other person also has a point of view. I think we need to listen, not to respond, but to understand,” says Krishna. Have a conversation and get to know where your family member or friend is coming from. Why do they believe what they believe? Where are they getting their information?

[Good advice: Impartial surveys show that skeptics are more knowledgeable than knee-jerk warmists. If you find out they have been reading the NIPCC reports, or even the IPCC working group reports (not just the SPM, or the media releases), better to change the subject, prepare to change your own mind, or walk away.]

“Consider who your loved one, for example, trusts for information,” says Robinson. That will help gauge how and why they feel the way they do.

[How about some self-awareness here: Whose words are you taking as gospel truth regarding the future of this complex, uncertain and unpredictable climate system?]

After you’ve listened to your loved one’s perspective, consider sharing your own worries, fears, and hopes for the future. “Share what resonates the most with you,” says Robinson. You can always share some of the actionable lifestyle and behavior changes you have adopted to lower individual carbon impacts, and share how you’ve gotten involved with collective actions.

[How about this when someone at the table says, “We really need to do something to fight climate change.” You ask, “What do you propose to do?” When they say, “Leave the fossil fuels in the ground,” you ask, “And replace that energy how?” “Do you know that replacing one gas turbine power plant requires 360 windmills and 60,000 acres of land instead of 20 acres?” See Kelly’s Climate Clarity.] 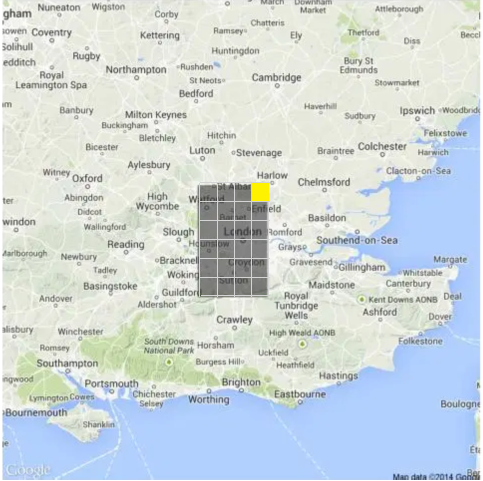 “I would urge you to really listen to what others are saying if they have a differing opinion, to understand where they’re coming from. And then you can formulate your strategies on how best to convey your message,” says Krishna.

2. Bring on the science (but know when to walk away)

“We know 97 percent of all scientists say global warming is definitely happening because of burning fossil fuels. And we know what we have to do to stop it,” says Robinson. She draws on the analogy, “If 97% of doctors told you your appendix should come out, you’d have the surgery. Right? Climate change is happening here and now. And the clock is ticking. The consensus we have is a very powerful fact to convince people around the dining table.”

[ Do you know the 97% figure comes from 75 out of 77 funded climate scientists who agreed to two statements: “The world has warmed since 1850, and human activity contributed to it.”  See Talking Climate.]

Generally, it can never hurt to brush up on your climate facts and answers to common myths. But, as experts like Robinson and Krishna have also pointed out, not everyone responds to facts the same way. The truth is, some people who do not accept scientific facts won’t change their mind because of another bias or interest related to their view of the climate. (Like, what if someone in your family owns a gas station? Or works for a natural gas company?) Most of us are not blank slates when it comes to the topic of climate change, and the more informed we are, the easier it is to cherry-pick information that confirms already-held beliefs and attitudes.

[An example of cherry-picking is claiming that food production is threatened by climate change. In fact world production of food crops is setting records every year due to the growth rates from higher CO2 and warmer, milder temperatures. Rice, wheat and corn are all showing higher yields. Why would we want to stop that?  See Climate Delusional Disorder (Food Fears)]

“You’re going to get blue in the face, and steam is going to come out of your ears, and you’re going to waste all kinds of time that you could have spent with your other, more fun, relatives at Thanksgiving. dinner,” says Robinson. “If you try to argue, it’s just not going to work. You just have to say, well, you’re wrong and move away.”

That doesn’t mean there aren’t skeptics who will listen and be open to a conversation, Robinson cautions. She says the only way to find out if someone has an open mind is to have a dialogue and stick to sharing facts and stories that have resonated most strongly with you.

[Open mindedness cuts both ways.The issue of global warming/climate change has been used to polarize populations for political leverage. Environmentalists like Tisha Schuller have been subjected to years of  threats, extremism, and misinformation from a community to which they once belonged.  The reason: Expressing doubts about the anti-fossil fuel crusade.  See More Civil Climate Discourse

3. Take the issue close to home

Researchers have continuously found that the farther away a climate-related event is perceived to be—like, the notorious lonely polar bear stranded in a melting sea of ice—the less a viewer or listener feels connected to the issue.

“For decades people immediately went ‘Oh, well, that’s too bad that’s happening to the polar bear, but that’s certainly not happening to me, that’s happening far away,’” says Robinson. “Now, public concern is actually increasing because people are beginning to see this more and more with their own eyes.”

It has also been found that when local news stories cover climate change, people are more likely to understand the direct impacts. So, why not take the same approach when talking with skeptical loved ones? If you’re a Boston local, you can talk about how climate change is already threatening the coast of Cape Cod, causing residents to prepare for stronger storms and rising seas. Or perhaps someone you know has been impacted by the California wildfires that are becoming increasingly more devastating, or the record-breaking flooding in the Midwest, or by storms like Superstorm Sandy and Hurricane Harvey that destroyed US communities. 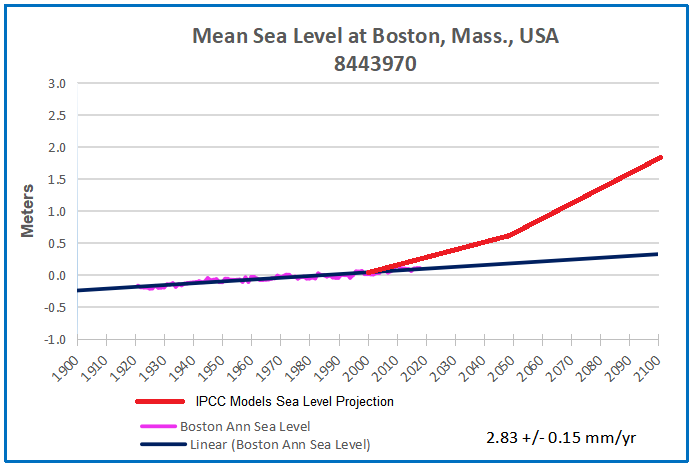 [Weather is not climate; we all used to agree on that before the warming plateau the last two decades.  Statistics show no correlation between rising CO2 and weather events.  For example:] 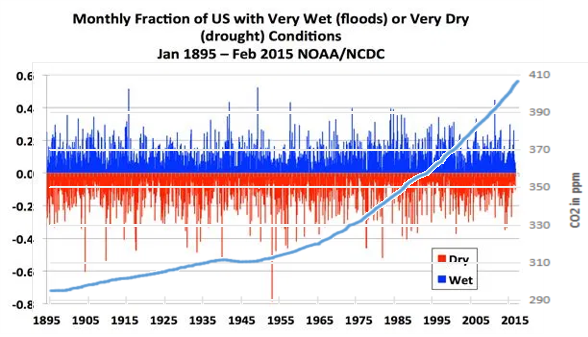 Krishna says it can never hurt to remind people, “What’s the harm in trying to have a better, less polluted world? We’ll have cleaner air, cleaner water, a more sustainable planet. How can that be a bad thing?”

[Let’s all agree that fossil fuels have made our air cleaner and our water more pure.  And more atmospheric CO2 is plant food, restoring the forests and increasing our crops.]

But if things start to escalate and the conversation doesn’t feel productive, your best bet is to step back for the sake of your own mental and emotional health, and spend time enjoying your holiday, like Robinson pointed out earlier.