Only one question matters to people:  What is my risk of getting Covid19 and dying from it?  Daniel Horowitz explains that the Dutch have answered this question while the US CDC has not. See One chart exposes the lie behind universal lockdowns in the Conservative Review. Excerpts in italics with my bolds.

What is the true infection fatality rate of COVID-19, broken down by age and health status?

This is a simple question for which the CDC should have a clear answer by now, accompanied by a readable chart – a chart showing everyone’s demographic risk assessment so that we can better target our infection mitigation efforts.

Yet it’s the one thing our government hasn’t done. Wonder why?

Take a look at the above chart (which I translated into English using Google Translate) prepared by the Economisch Statistische Berichten (ESB), a Dutch economics magazine, quantifying the infection fatality rate for the Dutch population based on age bracket. The data were calculated from an antibody test of 4,000 blood donors conducted by Dutch blood bank Sanquin to see how many have been infected for the purpose of donating blood plasma to those currently suffering from the virus. The data were presented to the Dutch House of Representatives in mid-April by the National Institute for Public Health and the Environment (RIVM).

Study this chart for a few minutes and take in all the data – from the asymptomatic/mildly symptomatic rates to the hospital and fatality rates divided by age. You have to get to the 50-59 age group just to reach a 0.1% fatality rate, the level often cited as the overall death rate for the seasonal flu. Those are all lower odds than an individual has of dying in a giving year of any cause and in the case of an average 50-year-old, five times lower.

They didn’t test kids under 20, but their fatality rate is likely near zero.

While the Netherlands is an entirely different country, it has actually experienced a 30% higher death rate per capita than America. So the numbers are likely not any higher here for those under 70, especially because the macro serology tests showing a 0.2% fatality rate (but grossly distorted by the death rate of those over 80), as well as what we are seeing in prisons and ships in younger populations, seems to harmonize with this data. A brand-new study from France also shows very similar estimates of fatality rates, at least for those under 60.

If anything, those who are sicker tend to stay away from blood donation, so it could be that infection rate was even higher than this sample suggests, thereby driving down the fatality rate even lower.

Moreover, several weeks later, another research group in the Netherlands did a second serology test that broke down even more groups and came up with almost identical results:

As you can see, the death rate doesn’t even climb above 1% until you reach over 70, with a steep and dangerous growth of risk over 75 and 80. However, it’s important to remember that even those death rates might need to be cut in half for those outside nursing homes, given that half the deaths in most countries are in senior care facilities.

Why has our government not put out a similar chart? How many Americans even know that children have near-zero threat and anyone under 60 has next to no risk of dying from the virus? Even those between 60 and 69 are at much lower risk than anything the government has suggested and that the level of panic indicates. The World Health Organization wrongly pegged the overall death rate for all ages at 3.4% on average. This simple fact makes a world of difference both to our targeted response to the virus and also to the degree of panic that should and should not be infused into society so as not to keep people away from hospitals when they are experiencing other potentially dangerous medical conditions.

But even this chart doesn’t tell the full story. The virus lopsidedly targets people with particular underlying conditions, such as heart disease and diabetes. It is simply criminal that, with the tens of billions of dollars in “emergency” funding, the CDC has not conducted or published the results of a survey of 20,000 or so Americans to determine the exact number of infections and the fatality rate broken down by each health and age status. To most Americans, based on what the government and media have been putting out, it’s all the same and even babies will all die, as if there is a 50% fatality rate. Most people I know think their infants are in danger from COVID-19, even though the threat of flu and SIDS is much more pervasive in infants than that of coronavirus.

Consequently, we destroyed our entire country and sacked the Constitution all for a very narrow and specific problem that required a precise and balanced approach. Yet two months into this mistake, our government won’t even put out the simple math demonstrating this obvious point. As one commentator so aptly observed,

“Homogenous intervention in the face of heterogenous risk is just cruelty passed off as equality.” 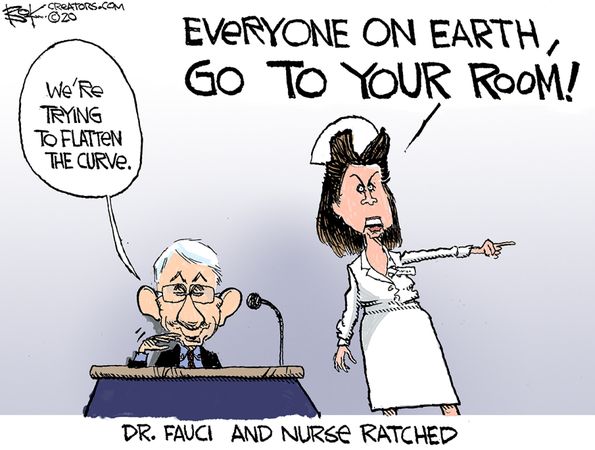