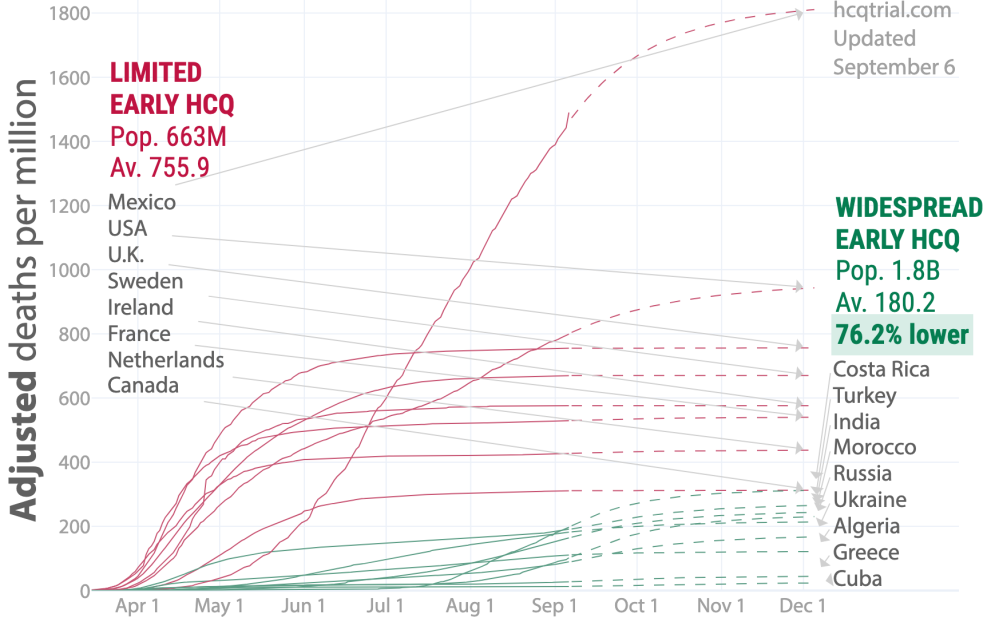 The report is Early treatment with hydroxychloroquine: a country-based analysis at C19study.com.  Excerpts in italics with my bolds.

The treatment group countries generally show significantly slower growth in mortality which may be due to treatment, interventions, differences in culture, or the initial degree of infections arriving into the country. Over time we expect that increasingly similar percentages of people will have been exposed, since it is unlikely that the virus will be eliminated soon.

To account for future spread, we created an estimate of the future adjusted deaths per million for each country, 90 days in the future, based on a second degree polynomial fit according to the most recent 30 days, enforcing the requirement that deaths do not decrease, and using an assumption of a progressively decreasing maximum increase over time. Figure 5 shows the results, which predicts a future relative risk of 0.24, i.e., the treatment group has 76.2% lower chance of death.

Entire countries made different decisions regarding treatment with HCQ based on the same information, thereby assigning their residents to the treatment or control group in advance. Since assignment is done without regard to individual information such as medical status, assignment of individuals is random for the purposes of this study.

We focus here on countries that chose and maintained a clear assignment to one of the groups for a majority of the duration of their outbreak, either adopting widespread use, or highly limiting use. Some countries have very mixed usage, and some countries have joined or left the treatment group during their outbreak. We searched government web sites, Twitter, and Google, with the assistance of several experts in HCQ usage, to confirm assignment to the treatment or control group, locating a total of 225 relevant references, shown in Appendix 12. We excluded countries with <1M population, and countries with <0.5% of people over the age of 80. COVID-19 disproportionately affects older people and the age based adjustments are less reliable when there are very few people in the high-risk age groups. We also excluded countries that quickly adopted aggressive intervention and isolation strategies and consequently have very little spread of the virus to date. This exclusion, based on analysis by [Leffler], favors the control group and is discussed in detail below. We also present results without these exclusions for comparison.

Collectively the countries we identified with stable and relatively clear assignments account for 31.1% of the world population (2.4B of 7.8B). Details of the groups and evidence, including countries identified as having mixed use of HCQ, can be found in Appendix 12.

We analyze deaths rather than cases because case numbers are highly dependent on the degree of testing effort, criteria for testing, the accuracy and availability of tests, accuracy of reporting, and because there is very high variability in case severity, including a high percentage of asymptomatic cases.

Several theories exist for why HCQ is effective [Andreani, Brufsky, Clementi, de Wilde, Derendorf, Devaux, Grassin-Delyle, Hoffmann, Hu, Keyaerts, Kono, Liu, Pagliano, Savarino, Savarino (B), Scherrmann, Sheaff, Vincent, Wang, Wang (B)], some of which involve co-administration of other medication or supplements. Most commonly used are zinc [Derwand, Shittu] and Azithromycin (AZ) [Guérin]. In vitro experiments report a synergistic effect of HCQ and AZ on antiviral activity [Andreani] at concentrations obtained in the human lung, and in vivo results are consistent with this [Gautret]. Zinc reduces SARS-CoV RNA-dependent RNA polymerase activity in vitro [te Velthuis], however it is difficult to obtain significant intracellular concentrations with zinc alone [Maret]. Combining it with a zinc ionophore such as HCQ increases cellular uptake, making it more likely to achieve effective intracellular concentrations [Xue]. Zinc deficiency varies and inclusion of zinc may be more or less important based on an individual’s existing zinc level. Zinc consumption varies widely based on diet [NIH]. To the extent that the co-administration of zinc, Azithromycin, or other medication or supplements is important, we may underestimate the effectiveness of HCQ because not all countries and locations are using the optimal combination.