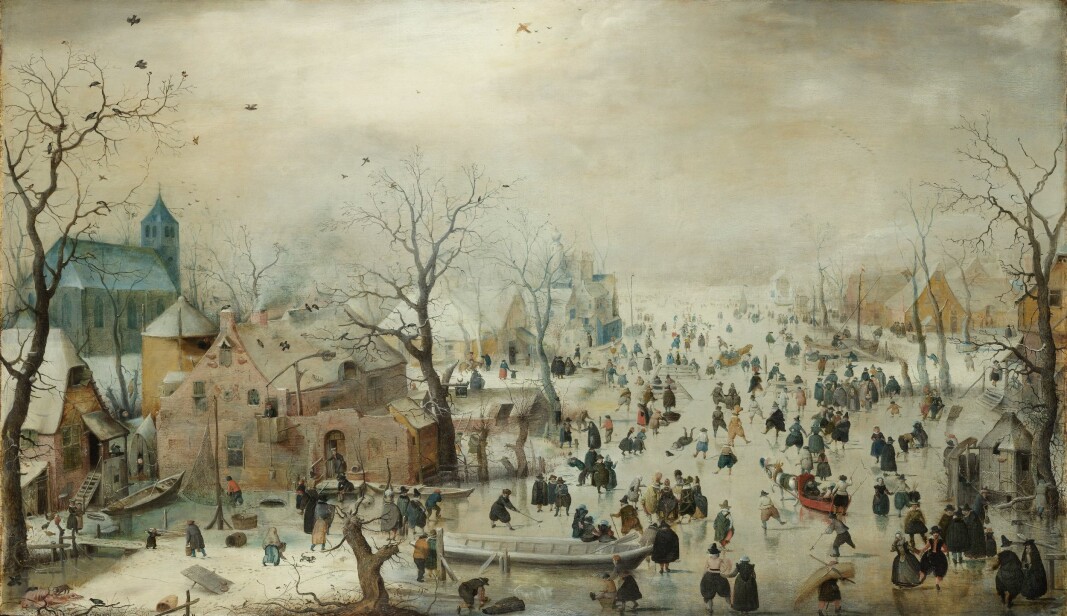 The Dutch artist Hendrick Avercamp painted winter activity on the ice during the first half of the 17th century, when it was quite cold in Central and Northern Europe. (Image: Henrik Avercamp / Wikimedia Commons)

Elise Kjørstad writes at Science Norway What actually started the Little Ice Age? Excerpts in italics with my bolds.

It all may have started with sea ice, and the changes may have happened all by themselves without the influence of volcanoes or the Sun, researchers behind a new study say.

The ninth century seems to have experienced a warmer climate, which has been called the Medieval Warm Period.

But from the 14th century things were different. It rained “without stopping” in 1315, and grain didn’t ripen. The situation was much the same the following year. Later in the 14th century there were several episodes of wild weather and cold periods.

This cooling caused glaciers to expand in Scandinavia, the Alps, in Iceland, Alaska, China, in the southern Andes and in New Zealand.

Generally speaking, the Little Ice Age is said to have begun because of an increase in volcanism and reduced activity of the Sun.

“The timing agrees quite well with the great eruptions from the 13th century. So there is good empirical evidence that this could be true,” said Martin Miles, a researcher at NORCE Norwegian Research Centre, and the Bjerknes Centre for Climate Research in Bergen, and at the University of Colorado at Boulder in the USA.

But in a new study, Miles and his colleagues have looked at another possibility. 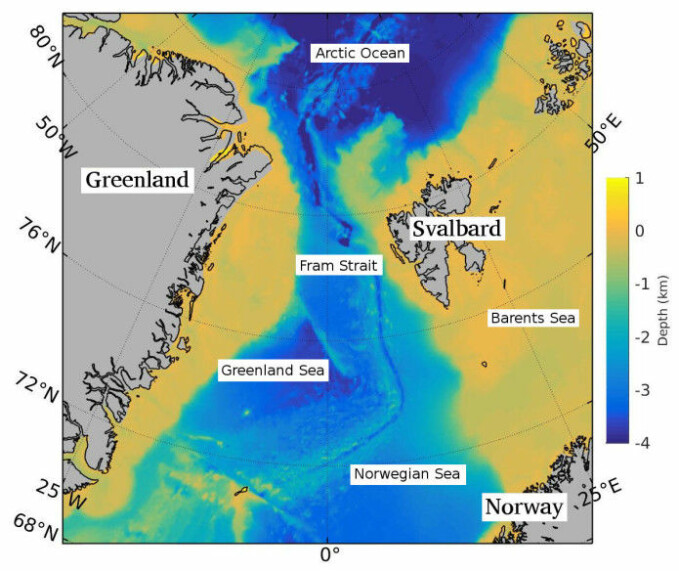 The strait between Greenland and Svalbard is the only deep connection between the Arctic Ocean and the world’s oceans. (Image: Bdushaw / CC BY-SA 3.0 / Wikimedia Commons)

Lots of ice on the go

In their new study, Miles and his colleagues looked at the transport of sea ice from the Arctic over a 1400 year period.

They compiled data from seabed samples from areas outside Greenland, the eastern part of the Fram Strait, the Greenland Sea and off Iceland. The samples contained small fossils that give researchers information about sea temperatures and loose material that sea ice had carried with it.

In several of these areas, ice will only be found if there is an especially large amount flowing out of the Arctic Ocean. This is particularly true during cold periods and when there is also a lot of sea ice formation.

“We discovered that an unusually large amount of sea ice flowed out of the Arctic Ocean from the beginning of the 14th century. It is very interesting, and the biggest event we found during the last 1400 years,” says Miles. Miles says sea ice may have affected the climate in Europe in the 14th century in this way.

The ice that melts and turns into fresh water can affect ocean currents, which in turn affect the atmosphere and climate, he says.

“Ocean currents are very important for transporting heat to Europe. If the currents weaken a little, it will be much colder than usual,” he said.

Arctic sea ice affects climate on seasonal to decadal time scales, and models suggest that sea ice is essential for longer anomalies such as the Little Ice Age. However, empirical evidence is fragmentary. Here, we reconstruct sea ice exported from the Arctic Ocean over the past 1400 years, using a spatial network of proxy records. We find robust evidence for extreme export of sea ice commencing abruptly around 1300 CE and terminating in the late 1300s. The exceptional magnitude and duration of this “Great Sea-Ice Anomaly” was previously unknown. The pulse of ice along East Greenland resulted in downstream increases in polar waters and ocean stratification, culminating ~1400 CE and sustained during subsequent centuries. While consistent with external forcing theories, the onset and development are notably similar to modeled spontaneous abrupt cooling enhanced by sea-ice feedbacks. These results provide evidence that marked climate changes may not require an external trigger. The Climate System is Self-Oscillating: Sea Ice Proves It.

Scientists have studied the Arctic for a long time at the prestigious AARI: Arctic and Antarctic Research Institute St. Petersburg, Russia. V. F. Zakharov has published a complete description supported by research findings under this title: Sea Ice In the Climate System A Russian View (here)

Below I provide excerpts from this extensive analysis to form a synopsis of their view: Component parts of the climate system interact so that Arctic Sea Ice varies within a range constrained by those internal forces.

The most probable regulator of the physical geographical process can be found from analysis of the relationships between the components of the climate system. It is not necessary to investigate the cause-effect relationships between all these components in succession. It is sufficient to choose one of them, let us say sea ice, and consider its direct interaction with the atmosphere and the ocean – in the climate system and the significance of internal mechanisms in the natural process. Pg 1

The idea that the ice area growth at present can be achieved by changes in only the haline structure of the upper ocean layer, as a result of surface Arctic water overflowing onto warmer but more saline water, is supported both by calculations and empirical data. Pg. 46

First of all, it should be noted that the signs of temperature and salinity anomalies coincide in most cases: a decreased salinity corresponds to enhanced temperature and vice versa. Such similarity in the change of these parameters is impossible to explain from the point of view of the governing role of thermal conditions in the atmosphere with regard to the ocean, as the air temperature increase and decrease can result only in the change of the thermal state of sea surface layer not its salinity. Pgs. 48-49

Thus, the presented facts suggest that the most significant cause of changes in the ice cover extent are the changes in the vertical water structure in the upper ocean layer, rather than the changes of thermal conditions in the atmosphere. These changes are induced by fluctuations in the horizontal dimensions of the halocline, which are governed in turn by the expansion or reduction of the surface Arctic water mass. Pg. 49

It follows from the above that, under present day conditions, the changes in the area of the Arctic sea ice during the colder period of the year can be induced only by the change in the haline structure of the upper ocean layer. Indirectly, this change will also affect the thermal state of the atmosphere. Pg. 56

It is important to note that the ice effect on the atmosphere is not limited to the thermal effect. That it can produce a significant effect on atmospheric circulation is already evident from the fact that the Arctic anticyclone, considered by Viese [13] as a regulator of atmospheric processes in the Northern polar region, could form as a pressure formation only in the conditions of the ice regime in the Arctic. Pg. 56

An analysis of cause-effect relationships does not leave any doubt in what direction and in what order the climate signal propagates in the atmosphere-ocean-polar ice system. This is not the direction and order usually assumed to cause present climate change. When it has become clear that the changes in the ocean, caused by disturbances of its freshwater balance, precede changes in the extent of sea ice, and the latter the changes in the atmosphere, then there was nothing left but for us to acknowledge self oscillation to be the most probable explanation for the development of the natural process. Pg. 58

Maybe the most convincing evidence of the Arctic sea ice stability is its preservation during the last 700,000 years despite vast glacial- interglacial fluctuations. The surface air temperature in the Arctic during the interglacial periods was higher by several degrees than present day temperatures. Pg. 44

The remarkable stability of our planetary climate system derives from feedbacks between internal parts of the system, providing the oscillations we observe as natural variability. Arctic Sea Ice is a prime example. Bottom line:  A bit less ice in the Arctic indicates that we are not yet slipping into an ice age, little or otherwise.