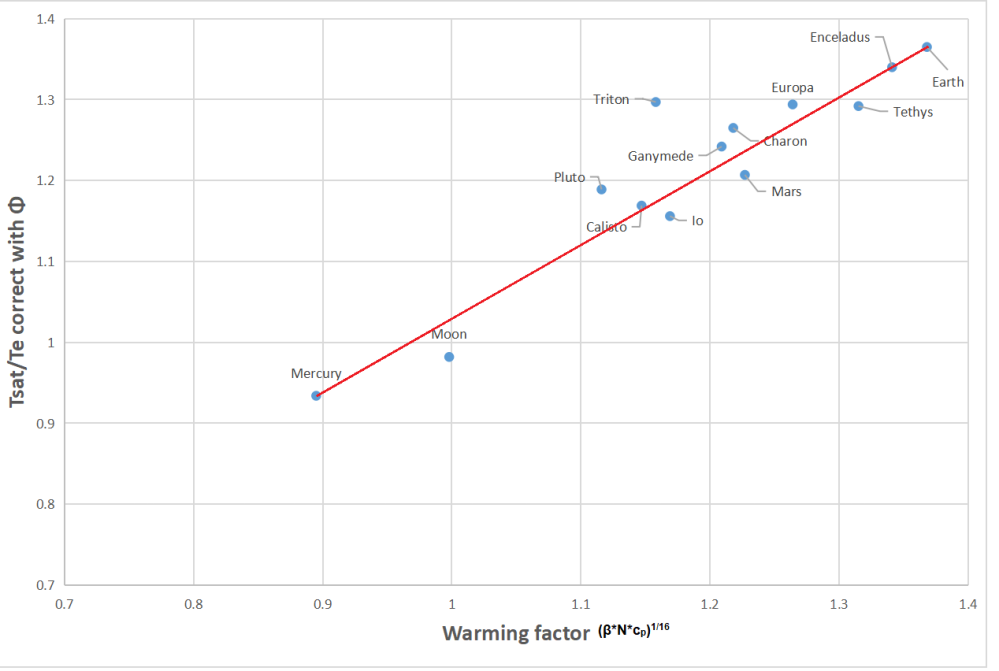 In the second graph we have the Ratio of Planet Measured Temperature to the Corrected Blackbody Temperature (Tsat /Te.correct). Link [30] In this graph we use in (Tsat /Te.correct) the planet corrected blackbody temperatures – which are the planet effective temperatures Te.correct corrected by the use of the Φ -factor. The Φ = 0,47 for smooth surface planets and moons, and the Φ = 1 for the rough surface planets and moons. As we can see, in the second graph, the red dot planets and the green dot planets have stretched in a linear functional relation according to their Warming Factor = (β*N*cp)^1/16 values. The bigger is the planet’s or moon’s Warming Factor, the higher is the (Tsat /Te.correct) ratio. It is obviously a linearly related function.

On a recent comment thread at Climate Etc. Christos Vournas provided a link to his blog. After spending time reading his articles I made this post to introduce aspects of his studies and thinking that I find persuasive. His home page sets the theme The Planet Surface Rotational Warming Phenomenon. Below are just a few excerpts from Vournas’ blog in italics with my bolds.

My name is Christos J. Vournas, M.Sc. mechanical engineer, living in Athens Greece. I launched this site to have an opportunity to publish my scientific discoveries on the Climate Change.  I have been studying the Planet Earth’s Climate Change since November 2015;

Then I found the faster a planet rotates (n2>n1) the higher is the planet’s average (mean) temperature T↑mean.

But there is something else very interesting happens. When a planet rotates faster it is a warmer planet. (It happens because Tmin↑↑ grows higher than T↓max goes down)

The faster a planet rotates (n2>n1) the higher is the planet’s average (mean) temperature T↑mean:

The understanding of this phenomenon comes from a deeper knowledge of the Stefan-Boltzmann Law. It happens so because when rotating faster a planet’s surface has a new radiative equilibrium temperatures to achieve.

A Planet Without-Atmosphere Mean Surface Temperature Equation derives from the incomplete Te equation which is based on the radiative equilibrium and on the Stefan-Boltzmann Law.

We have moved further from the incomplete effective temperature equation

(which is in common use right now, but actually it is an incomplete planet Te equation and that is why it gives us very confusing results)

a – is the planet’s surface average albedo

We have discovered the Planet Without-Atmosphere Mean Surface Temperature Equation

The Planet Without-Atmosphere Mean Surface Temperature Equation is also based on the radiative equilibrium and on the Stefan-Boltzmann Law.

The Equation is being completed by adding to the incomplete Te equation the new parameters Φ, N, cp and the constant β.

Φ – is the dimensionless Solar Irradiation accepting factor.  It is a realizing that a sphere’s surface absorbs the incident solar irradiation not as a disk of the same diameter, but accordingly to its spherical shape.  For a smooth spherical surface Φ = 0,47 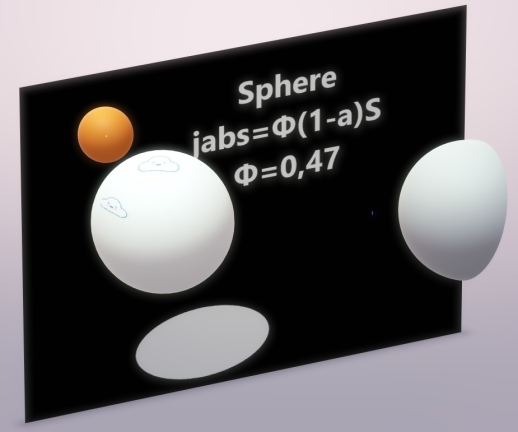 The Planet Without-Atmosphere Mean Surface Temperature Equation is also based on the radiative equilibrium and on the Stefan-Boltzmann Law.

Earth and Moon are at the same distance from the Sun R = 1 AU.

Mercury and Moon have the same minimum temperature 100 K.

And the faster rotating Earth and Mars appear to be relatively warmer planets.

We ended up to the following remarkable results

To be honest with you, at the beginning, I was surprised myself with these results.

You see, I was searching for a mathematical approach…

We use more major parameters for the planet’s surface temperature equation.

4. The thermal property of the surface (the specific heat capacity cp).

Altogether these parameters are combined in the Planet’s Without-Atmosphere Surface Mean Temperature Equation:

cp.earth = 1 cal/gr*oC, it is because Earth has a vast ocean.

Generally speaking almost the whole Earth’s surface is wet. We can call Earth a Planet Ocean.

And we compare it with the

These two temperatures, the calculated one, and the measured by satellites are almost identical.

It is a Stefan-Boltzmann Law Triumph! And it is a Milankovitch Cycle coming back! And as for NASA, all these new discoveries were possible only due to NASA satellites planet temperatures precise measurements!

The calculated planets’ temperatures are almost identical with the measured by satellites.

The Earth’s atmosphere is very thin. There is not any measurable Greenhouse Gasses Warming effect on the Earth’s surface. 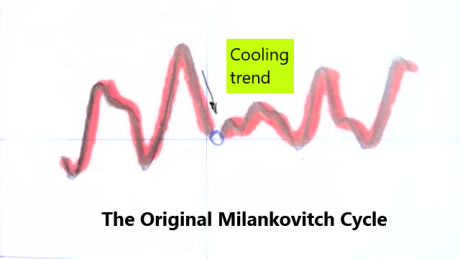 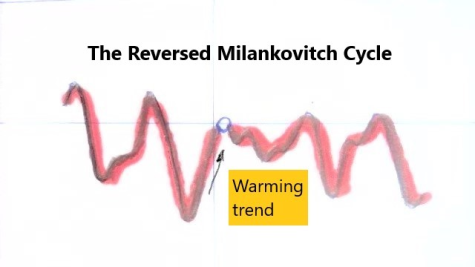 When comparing with the Perihelion point, which is at January 2, the solar irradiance Earth receives now is 7% less. As a result we have at the North Hemisphere much cooler summers and much warmer winters.  In 10.000 (ten thousand) years from now, Earth’s axis will be pointing at star Vega, instead of Polaris at which it points now. So in 10.000 years the Winter Solstice will occur when Earth is in Aphelion (it happens now with Earth in Perihelion).

As a result in 10.000 years we would have at the North Hemisphere much warmer summers and much cooler winters. A shift of 7% in the Hemispheres’ insolation intensity will happen.  Instead of the Southern Hemisphere (as it happens now) with its vast oceans accumulative capacity… there would be a +7% stronger insolation on the North Hemisphere’s plethora of continental areas.

We know continents do not accumulate heat so much effectively as oceans do, thus Earth will gradually cool down, until a New Ice Age commences!

The warming trend we observe now started some 6.500 years ago. It is a very slow process. The MWP ( the Medieval Warm Period ) is a confirmation of the existence of a long warming trend.  The LIA ( the Little Ice Age ) was observed as a colder atmosphere and more snowy winters. Also the glaciers were increasing.

On the other hand oceans continued accumulating heat.  It is a very long cycle. We are observing the Reversed Milankovitch Cycle culmination period. It will last about a millennia and a half and then there will be a cooling trend.

Right now Planet Earth is in an orbital forced warming trend. And these are culmination times.  The very slow warming trend will continue for about a 1,5 millennia on. Then slowly and gradually the Global Temperatures will become cooler.