An imposing panorama of an ice-fjord floating along the bone-chilling water in Svalbard. From Daily Mail

Arctic ice extent went over 9M km2 yesterday, or about 60% of annual maximum.  Several seas are already maxed out:  Laptev, East Siberian, Canadian Archipelago.  The image below shows the refreezing this month.

At the bottom watch Beaufort Sea filling in.  On the middle right Baffin Bay steadily adds ice, while Hudson bay starts from its top, but also gets fast ice way down the western coastline into James Bay.  At the top center is Svalbard with Greenland Sea growing on its right, and Kara and Barents filling in on its left.

Dr. Judah Cohen from Atmospheric and Environmental Research (AER) saw this coming.  From his blog November 6 2017:

My thoughts on the weather pattern over the next several weeks  By Brett Anderson, AccuWeather senior meteorologist  11/08/2017, 4:30:48 PM 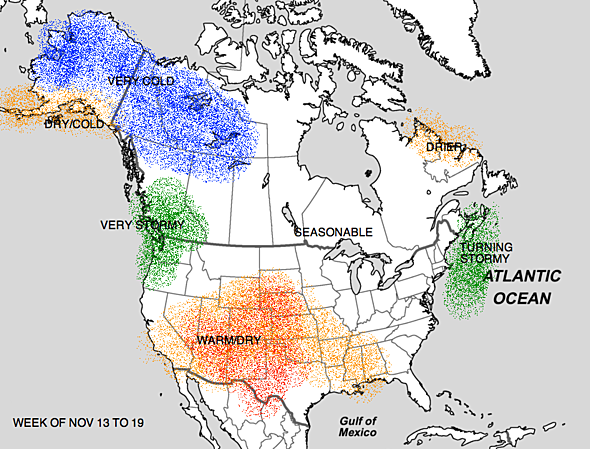 Interesting weather pattern setting up across North America as we progress through November and get into early December.

–A series of potent, Pacific storms will likely impact southern BC and the U.S. Pacific Northwest between Nov. 13 and 23. Expect several rounds of heavier rain and gusty winds for Vancouver Island and the mainland coast. Heavy snowfall for the Coastal Range and Rockies should help set the ski season off on a good start.

–A strong Arctic, cold front will press southward through Ontario and Quebec on Thursday. Behind the front, rain showers will quickly change to snow showers and a brief, heavier snow squall. There is the potential for brief whiteout conditions with any squall from southern and eastern Ontario through southern Quebec late Thursday afternoon and into the night. These squalls can quickly drop visibility making travel dangerous for motorists, especially on highways. Roads will generally be wet Thursday afternoon, but untreated roads may briefly get snow covered and icy Thursday evening and night as temperatures rapidly fall below the freezing mark. 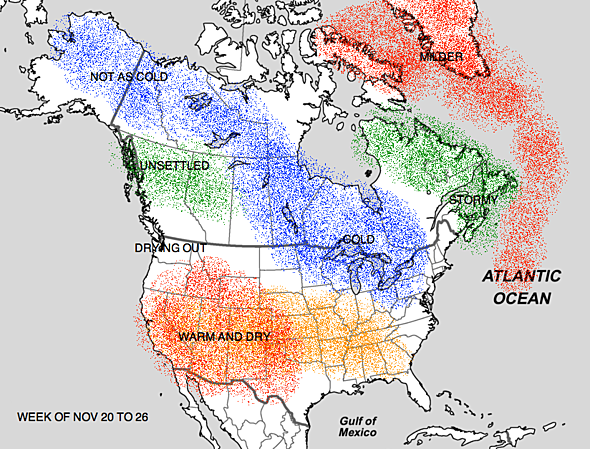 In addition to the cold, northwesterly winds will be quite strong Thursday night into early Friday with gusts in the 60- to 80-km/h range from eastern Ontario through Quebec and into western New Brunswick.

Dr. Cohen’s view of the winter Arctic climate system is posted in Snowing and Freezing in the Arctic