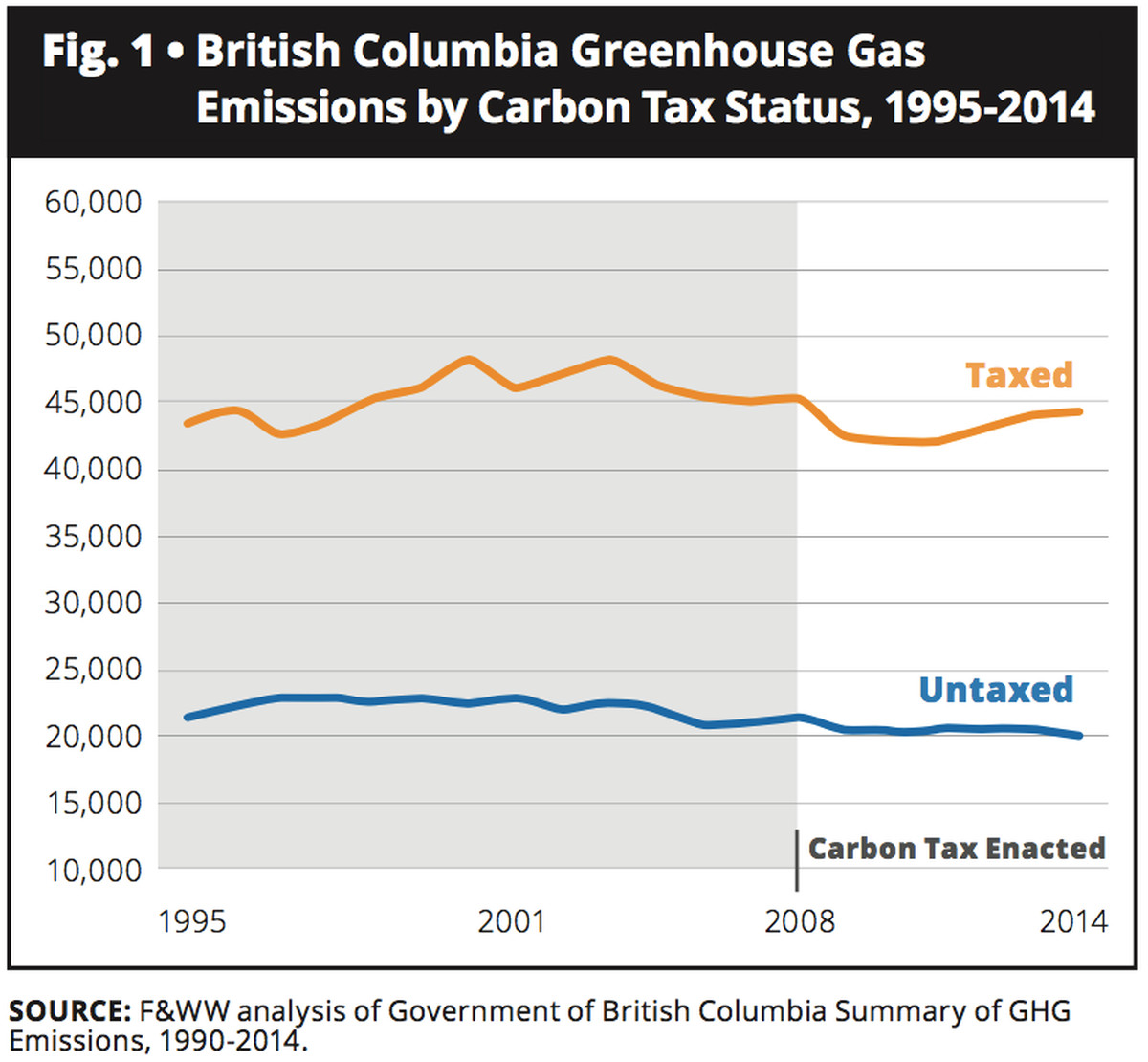 BC Carbon Tax had little effect on emissions.

The Carbon Tax experiment in British Columbia is summarized by Kris Sims, the B.C. director of the Canadian Taxpayers Federation.  He writes in the Financial Post
B.C. tricked Canadian politicians into believing its carbon tax policy works. It doesn’t.  Excerpts below in italics with my bolds.

While Prime Minister Justin Trudeau’s government gets set to force a federal carbon tax on all of Canada’s provinces and territories, taxpayers across the country deserve to know what happened in the country’s carbon-tax test case, British Columbia.

The Trojan horse of the carbon tax was wheeled into the B.C. public square in 2008 with the government’s promise that it would somehow cost average people nothing and would be “revenue neutral.” But, that turned out to be a cautionary tale for the ages.

For years, the carbon-tax cheerleaders continued to laud the fee that’s been tacked on to carbon-emitting goods and services, urging the rest of the country to follow suit. It was touted as a magical formula that would somehow protect the environment and lower taxes all at once. Visions of hydrogen-powered buses and solar cars danced in the heads of the green bean counters. “Revenue neutral” they all sang.

Before the charade was abandoned entirely, this is what “revenue neutral” meant for the B.C. carbon tax: In 2016–17 the provincial government raked in $1.2 billion in the carbon tax from taxpayers. The amount is listed on page 68 in the budget document as a frame entitled: “Revenue Neutral Carbon Tax Plan.” Then, the government scraped together 17 sundry tax credits and stuffed them into the carbon-tax frame, making the tax sum balance out to zero. Abracadabra: “revenue neutral.” That’s all it meant.

It was a crass puppet show. Every provincial and federal budget includes tax credits for things like home renovations, children’s fitness programs, film incentives, and business training tax credits. In B.C., however, there is an uncommon carbon tax taken from people, so these very common credits were just repackaged to make the tax appear neutral on paper. As a senior B.C. government official admitted during last year’s budget lockup, “this was always just an accounting exercise.”

Raising the Cost of Living

The carbon tax is not an accounting exercise for B.C. families. It’s an expensive reality for any Canadian subjected to it.

Under the federal formula at $35 per tonne, the carbon tax costs a lot of money at the gas station, approximately 8.55 cents per litre of gasoline with the GST tacked onto it, and 10.06 cents per litre for diesel with the GST. To fill up an average Toyota Camry with a 70-litre fuel tank costs $6 in carbon tax. A Dodge Ram pick-up truck costs more than $10 in carbon tax and a Ford Super Duty Diesel costs more than $17 per fill up. For tractor-trailer trucks, it costs $45 in carbon taxes to fill up just one of those cylinder tanks with diesel. Canadians bought more than 40 billion litres of gasoline and more than 16 billion litres of diesel fuel in 2016. Multiply that volume by the carbon tax per litre and the government haul is crystal clear.

BC Emissions Higher Than Ever

It gets worse, though, because even with the carbon tax costing Canadians billions of dollars, it’s still not reducing emissions, according to environmentalists leading the carbon-tax charge. In January, the Sierra Club reported on the B.C. experiment: “emissions were higher in 2015 than in 2010 and have risen in four of the last five years. B.C.’s latest emissions data mark years of failure to reduce emissions by more than a token amount.” If taking billions of dollars away from Canadians doesn’t reduce emissions, then, what is the point of this forced carbon tax?

A Tax Against Life As We Know It

People need to use oil and gas. The carbon tax doesn’t make people “reduce their use” of this modern lifeblood, it just costs them a lot of money while not stopping the emissions. Our economy and our modern way of life depend on oil and gas. We use them to run our power stations, till our soil, plant our food, mine our minerals, mill our wood, heat our greenhouses, manufacture all of our goods and haul those goods and food to market.

We use oil and gas products to travel to school, work and the beach. Planes, automobiles and transit buses all use oil and gas, and they were manufactured and shipped to us using oil and gas. All of these actions of everyday life depend upon the miracle of hydrocarbons, so, the carbon tax is a tax on everything.