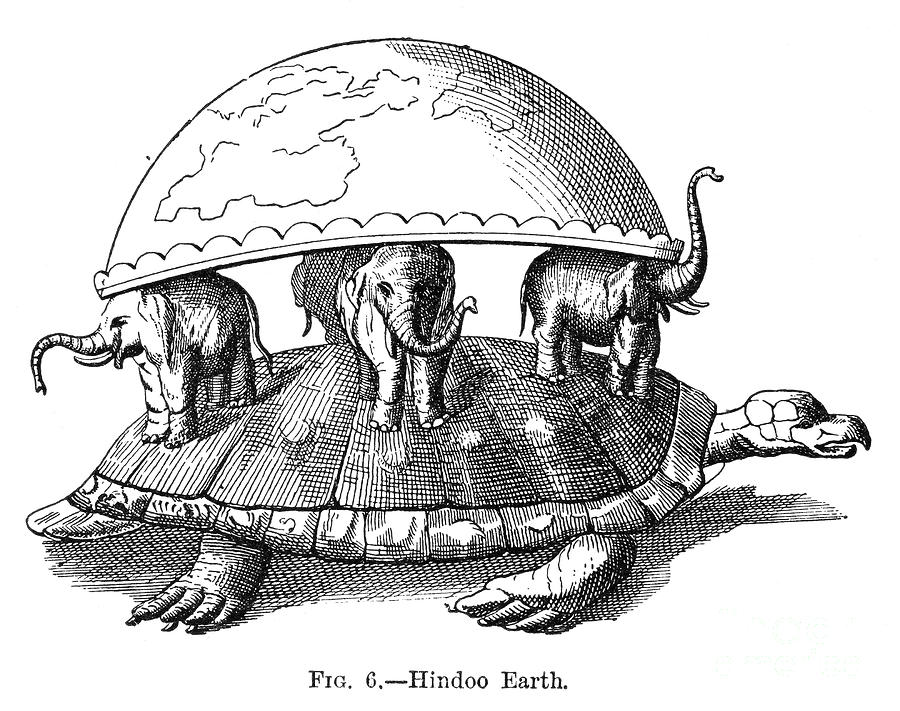 In Rapanos v. United States, Justice Antonin Scalia offered a version of the traditional tale of how the Earth is carried on the backs of animals. In this version of the story, an Eastern guru affirms that the earth is supported on the back of a tiger. When asked what supports the tiger, he says it stands upon an elephant; and when asked what supports the elephant he says it is a giant turtle. When asked, finally, what supports the giant turtle, he is briefly taken aback, but quickly replies “Ah, after that it is turtles all the way down.”  By this analogy, Scalia was showing how other judges were substituting the “purpose” of a law for the actual text written by congress.

The moral of the story is that our perceptions of reality are built upon assumptions. The facts from our experience are organized by means of a framework that provides a worldview, a mental model or paradigm of the way things are. Through the history of science, various pieces of that paradigm have been challenged and have collapsed when contradicted by fresh observations and measurements from experience. Today a small group of scientists have declared themselves climate experts and claim their computer models predict a dangerous future for the planet because of our energy choices. 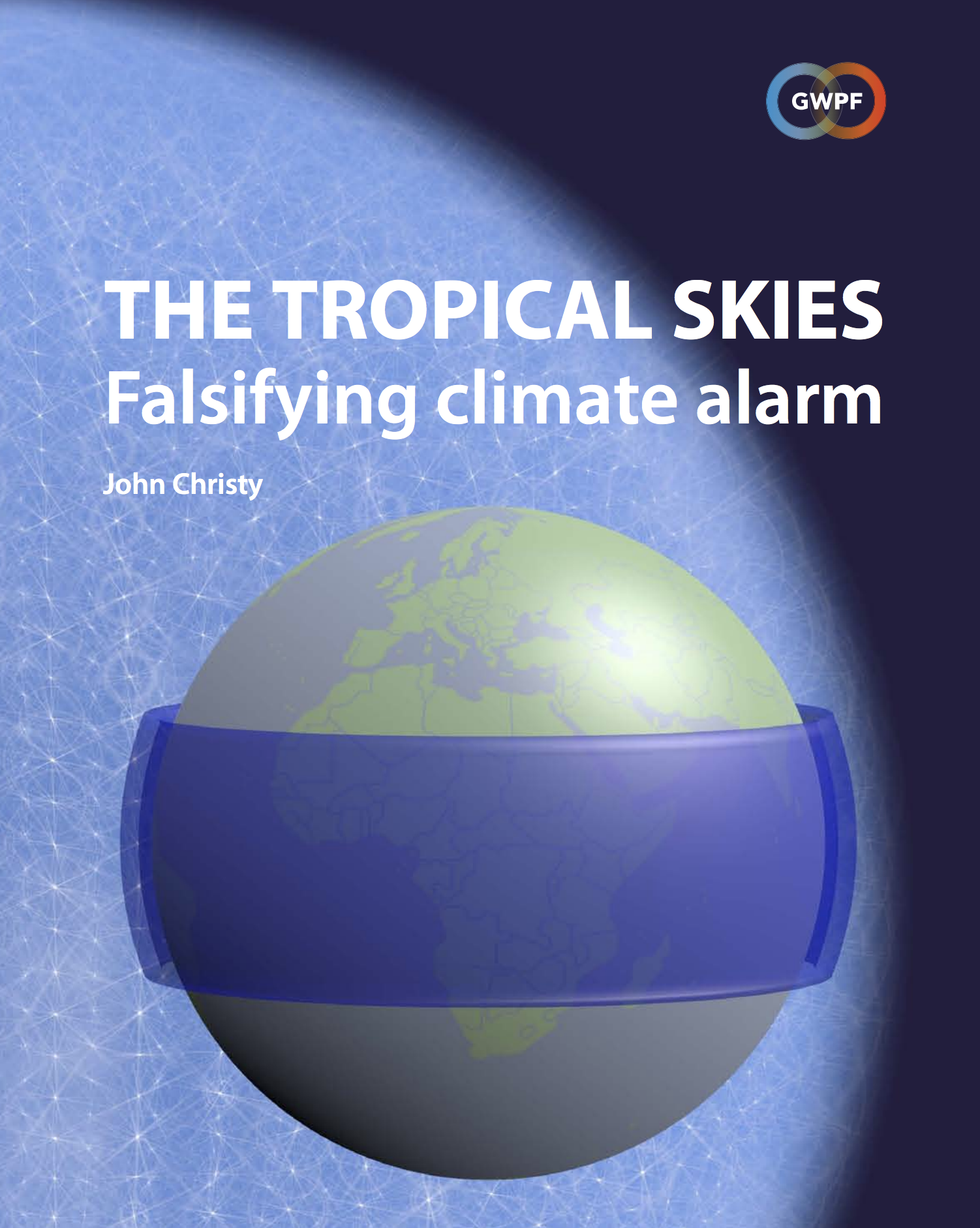 The Climate Alarmist paradigm is described and refuted in an essay by John Christy published by GWPF The Tropical Skies: Falsifying climate alarm. The content comes from his presentation 23 May 2019 to a meeting in the Palace of Westminster in London, England. Excerpts in italics with my bolds

At the global level a significant discrepancy has been confirmed between empirical measurements and computer predictions.

“The global warming trend for the last 40 years, starting in 1979 when satellite measurements began, is +0.13C per decade or about half of what climate models predicted.”

Figure 3: Updating the estimate.
Redrawn from Christy and McNider 2017.

The top line is the actual temperature of the global troposphere, with the range of original 1994 study shown as the shaded area. We were able to calculate and remove the El Niño effect, which accounts for a lot of the variance, but has no trend to it. Then there are these two dips in global temperature after the El Chichón and Mt Pinatubo eruptions. Volcanic eruptions send aerosols up into the stratophere, and these reflect sunlight, so fewer units of energy get in and the earth cools. I developed a mathematical function to simulate this, as shown in Figure 3d.

After eliminating the effect of volcanoes, we were left with a line that was approximately straight, apart from some noise. The trend, the dark line in Figure 3e, was 0.095◦C per decade, almost exactly the same as in our earlier study, 25 years before.

Our result is that the transient climate response – the short-term warming – in the troposphere is 1.1◦C at the point in time when carbon dioxide levels double. This is not a very alarming number. If we perform the same calculation on the climate models, you get a figure of 2.31◦C, which is significantly different. The models’ response to carbon dioxide is twice what we see in the real world. So the evidence indicates the consensus range for climate sensitivity is incorrect.

Almost all climate models have predicted rapid warming at high altitudes in the tropics due to greenhouse gas forcing.

“They all have rapid warming above 30,000 feet in the tropics – it’s effectively a diagnostic signal of greenhouse warming. But in reality it’s just not happening. It’s warming up there, but at only about one third of the rate predicted by the models.”

Figure 5: The hot spot in the Canadian model.
The y-axis is denominated in units of pressure, but the scale makes it linear in altitude.

Almost all of the models show such a warming, and none show it when extra greenhouse gas forcing is not included. Figure 6 shows the warming trends from 102 climate models, and the average trend is 0.44◦C per decade. This is quite fast: over 40 years, it amounts to almost 2◦C, although some models have slower warming and some faster. However, the real-world warming is much lower; around one third of the model average.

Figure 7 shows the model projections in pink and different observational datasets in shades of blue. You can also easily see the difference in warming rates: the models are warming too fast. The exception is the Russian model, which has much lower sensitivity to carbon dioxide, and therefore gives projections for the end of the century that are far from alarming. The rest of them are already falsified, and their predictions for 2100 can’t be trusted.

The next generation of climate models show that lessons are not being learned.

“An early look at some of the latest generation of climate models reveals they are predicting even faster warming. This is simply not credible.”

We are just starting to see the first of the next generation of climate models, known as CMIP6. These will be the basis of the IPCC assessment report, and of climate and energy policy for the next 10 years. Unfortunately, as Figure 8 shows, they don’t seem to be getting any better. The observations are in blue on the left. The CMIP6 models, in pink, are also warming faster than the real world. They actually have a higher sensitivity than the CMIP5 models; in other words, they’re apparently getting worse! This is a big problem.

So the rate of accumulation of joules of energy in the tropical troposphere is significantly less than predicted by the CMIP5 climate models. Will the next IPCC report discuss this long running mismatch? There are three possible ways they could handle the problem:
• The observations are wrong, the models are right.
• The forcings used in the models were wrong.
• The models are failed hypotheses.

I predict that the ‘failed hypothesis’ option will not be chosen. Unfortunately, that’s exactly what you should do when you follow the scientific method.