The climate liability litigation campaign is recycling old, debunked research in another attempt to make the case for investor-owned oil and gas companies to be sued for climate change. The updated research comes from the Climate Accountability Institute (CAI), one of the organizers of the infamous 2012 La Jolla conference – a gathering held specifically to design a legal strategy against oil companies.

CAI’s Rick Heede quietly released a “training manual” for his Carbon Majors database on Monday and appears to be calling it quits, noting that he has launched “the search for a long-term and durable institutional host to take on the responsibility of updating the Carbon Majors database that I started working on fifteen years ago.” In the manual’s acknowledgements, Heede notes that without the support of his generous anti-fossil fuel donors, he’d “be sipping rum at some beachfront on Bora Bora…Bring the rum!”

Heede’s training manual explicitly notes that the purpose of the Carbon Majors database is to support efforts “to hold oil, gas, and coal companies morally, financially, and legally responsible for exacerbating foreseeable climate damages.” Notably, the new CAI research suffers from the same flaws as the old research:

The end goal of Heede’s and UCS’s research was to allow their papers to be used as evidence in complaints filed against oil and gas companies. “Big Oil must pay for climate change. Now we can calculate how much,” reads the headline of an opinion piece published by UCS’s Peter Frumhoff in The Guardian on the same day their study was published. Vic Sher, the plaintiffs’ attorney representing the majority of plaintiffs that have brought climate liability litigation against energy companies, gave a presentation in 2017 where he said he worked directly with Rick Heede to build his case.

Heede’s updated paper, which was funded and commissioned by the Union of Concerned Scientists, emphasizes that the purpose of this research is to support litigation.

But no one can say with a straight face that CAI has any credibility because of its known bias against energy producers. For example, CAI has received funding from the Rockefeller Brothers Fund – the primary funders of the entire #ExxonKnew campaign.

The key flaw in Heede’s research is that it relies heavily on Scope 3 emissions and a lot of estimation.

Scope 1 emissions are a company’s direct emissions, while Scope 2 emissions are those indirect greenhouse gases emitted by others to generate electricity to power the company’s operations. Scope 3 emissions are by far the biggest piece of the emissions pie and are those that come from the end-users of energy companies’ products. When you fill up your gas tank and burn that fuel, you’re generating the Scope 3 emissions. Multiply that by the 7.7 billion people on the planet and you can see why Scope 3 represents the lion’s share (88.5%!) of emissions catalogued in Heede’s report.

The problem with Scope 3 emissions, if you’re Heede, is that Scope 3 emissions are not under the company’s control and they are nearly impossible to account for. Companies cannot accurately track Scope 3 emissions, which is probably why they’re not required to report them. So, when Heede claims to have calculated a company’s total emissions, understand that he’s just making an educated guess, similar to how Drew Carrey awarded points on “Whose Line Is It Anyway?”

That’s a problem for the validity of his study, and for the lawsuits relying on his research, because it attributes the estimated emissions generated by consumers back to energy companies. 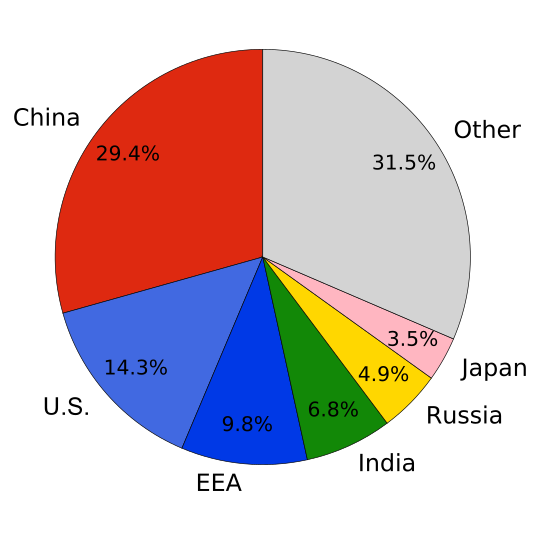 Global CO2 gas emissions in the year 2015 by country.

Other Rockefeller-funded groups, like CDP, have also alleged that major oil companies are responsible for the vast majority of historic greenhouse gas emissions. But CDP’s work is based on CAI’s flawed research and singles out publicly-listed companies like ExxonMobil, Shell, and BP, while ignoring state-owned entities like Russia’s Gazprom and National Iranian Oil, which allegedly contributed 59 percent of emissions since 1988. The Carbon Majors report also completely ignores high-emitting sectors of the economy, such as agriculture.

Heede appears to be handing off the Carbon Majors database to the Union of Concerned Scientists or another pro-climate litigation group to carry on his legacy. No doubt, they will continue to misrepresent the emissions of energy producers in hopes of holding a handful of companies responsible for the world’s emissions.