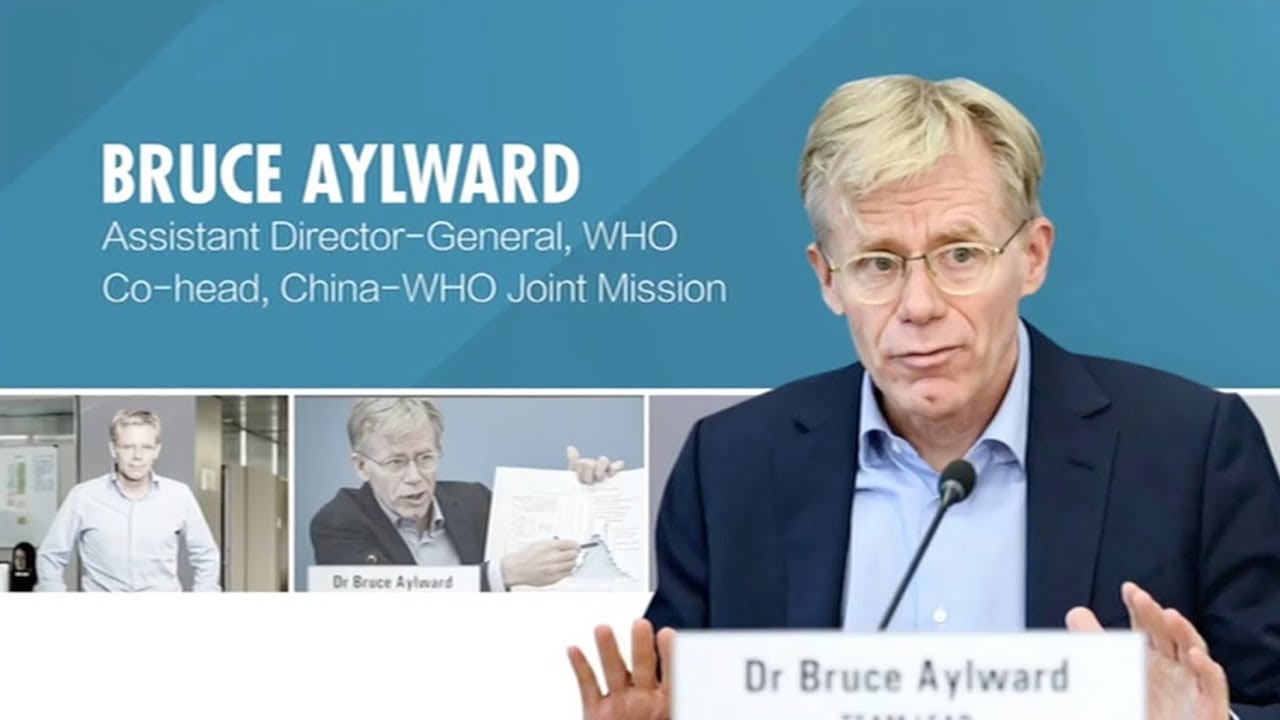 Dr. Bruce Aylward spoke in Geneva days after he left Wuhan province. He is not a contact and you can do what he did to not get the disease.

He was in Wuhan just a few days before. But he knew he was not a contact for COVID19 and so didn’t need to take any precautions. The press asked him why he wasn’t wearing a mask. He said that if he was a contact he wouldn’t be there, he’d be in quarantine, not talking to them with a mask on, it would make no sense (would not protect them adequately).

He is a top expert on such things – he led the campaign for almost complete eradication of Polio. He knows what he is doing.

COVID-19 ‘not beyond control,’ says Canadian WHO official Bruce Aylward

“What China demonstrates is that this one is not beyond control. It’s a function of your response,” said Bruce Aylward, who led an independent fact-finding mission to study the spread of the virus in China, as well as that country’s response.

COVID-19 spreads so rapidly that one Harvard researcher has warned that 40 to 70 per cent of the world’s adults will be infected. Its deadliness has raised frightening comparisons with the Spanish flu.

But “we don’t need to end up there,” said Dr. Aylward, who came away from China convinced that the virus is not spreading as easily as feared and that the outbreak can be arrested if public-health authorities prepare well and act swiftly. In China and elsewhere, there is little evidence of widespread community transmission, he said. Instead, “it is more a whole bunch of clusters of transmission.” Take the Diamond Princess cruise ship in Japan. Or members of a sect in South Korea. Or people living in single buildings in Beijing or Hong Kong.

That, he said, “is really important. Because you can get on top of that.”  But to do so, “speed is everything here.”

It Starts with the Right Hygiene

Robert Walker at Science 2.0 explains further in his well researched article How To Stop Yourself Getting Covid19 – And Help Stop The Spread – If Everyone Did This The Epidemic Would Soon Stop Excerpts in italics with my bolds

The WHO have said many times that governments can stop this disease by containing the virus swiftly and aggressively. Their most recent statement was the most blunt yet. They declared a pandemic, but one that we can stop. They said the question is not whether we can, but whether we will. Many governments have demonstrated this by doing it, including China, South Korea and Singapore.

Meanwhile you can stop yourself from getting the virus and so can your relatives and friends, by following the same simple rules that Bruce Aylward and his team used. This international team of experts toured the worst virus hotspots in China. They came away again confident that they are not contacts for the virus and didn’t need to be quarantined before talking directly to the press.

You can keep yourself safe from this virus in the same way, with the right hygiene. If most of us did this it would soon go extinct in the wild.

All of us who do this are helping our country and the world to contain the virus.

This is a graphic about it from the BBC. 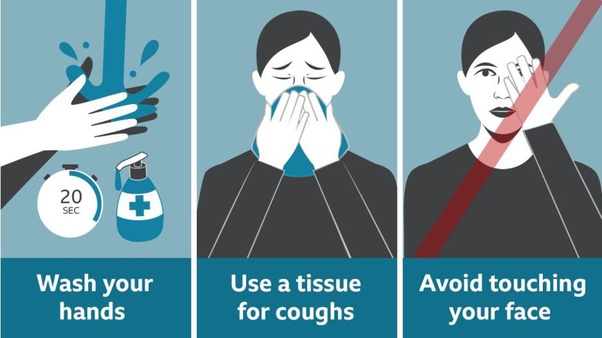 Do that and you won’t get it. You are also helping to stop it spreading.

Why These Behaviors Can Beat This Virus

While there is still much to be learned, we already know a great deal to be confident in following this protocol individually and collectively.  Some key things to remember.

This Disease is Hard to Get

It is very difficult to get this virus. Even if you are in a subway crowded together with others – for things like the flu you need to be there for 15 minutes or so to get it. But for this disease – so far there is no evidence of it being passed on to anyone else in public transport.

That is why it is so easy to contain it. The people who get it are usually people who were in prolonged or close contact.

This Disease is Not Airborne

This disease is not airborne (this was proved early on) – people sitting next to an infected person in an hours long plane journey won’t get it.

The evidence since then has been the same.

It Typically Only Spreads to Close or Prolonged Contacts

Normally you will get it from someone you know well, have close contact with or spend a lot of time with. This is why the contact tracing has worked so well. You are not likely to get it from a stranger at a busstop or on a train or plane.

This is different from SARS – there were many people got SARS from an infected person on the same flight. This has not yet happened at all with COVID 19 despite all the people who flew back from Wuhan with the virus.

Airborne spread has not been reported for COVID-19 and it is not believed to be a major driver of transmission.  See Report of the WHO-China Joint Mission on Coronavirus Disease 2019 (COVID-19)

Also few people get it even with close contacts. Between 1 and 5% of contacts, for people in the same households it ranges from 3 to 10%  So, even if you live in the same house as someone, 9 times out of 10 you won’t get it.  Even couples don’t get it from each other usually. Many stories of couples who are surprised their partner didn’t get it – you may have seen some on the media.

Not Likely to Catch It from Someone Without Symptoms

This is not a major factor for this disease – not a driver.

Transmission by people infected but not symptomatic is a major factor for flu but not for covid19.

Sometimes someone may be unwell but suppressing their fever using paracetemol as happened with the Chinese lady who infected many colleagues in Germany. But genuine asymptomatic spreading is exceedingly rare for covid19.

You can detect the virus before symptoms and some have such a mild version that they don’t even feel sick, these asymptomatic people don’t seem to be infecting others.

Although the Italian supermarkets are saying to stay a meter away from other customers – it’s the experience of China, Singapore etc that it doesn’t in fact spread this way.

They have found all the cases in Singapore through tracing close contacts all the way back to China.

Even in South Korea nearly all their over 7000 cases are from a few clusters.

The Italians are being hyper-cautious as it is a new disease and we are still learning about it. However there isn’t any evidence yet that this will make a significant difference to the spread.

As a personal guideline it is wise to keep a distance from anyone coughing and sneezing, and get out of the habit of touching your face if you can, wash hands frequently.

But even if someone coughs on you and they have covid19, in practice it is most unlikely that this infects anyone. Not just a single cough. It can’t because if it did this contact tracing would never have worked as effectively as it has.

It doesn’t need everyone to do this.

To see how it works – if you take no precautions at all, on average each person infects two others and the numbers double roughly every 4 days.

Now suppose we can stop 3/4 of those infections. This means that 100 people infect 50 instead of 200 (because you have stopped 3/4 of the infections)

This is a huge difference. Soon this outbreak will be over.

This is why the WHO say that although this is a pandemic, it can be the first pandemic we stop.

Also most people get a mild version of the disease and nearly everyone recovers, 67,003 just now.

Most of the 125,865 cases will recover. Probably eventually many more than 120,000 will recover of the ones that have it so far.

Most of the ones who haven’t recovered yet, and haven’t died yet, will recover.

Test Kits Are on the Way

Coronavirus has been categorized since the 1960s, that is why the latest outbreak has a -19 on the end, so other tests will still work, but due to bizarre rules and red tape created by government – there is no point in blaming Trump, both Obama and Bush forced or allowed this bureaucracy creep – a test that worked for coronavirus in 2003 or 2018 has to be treated like a new drug.

The New York State Department of Health got fed up with it and declared they were going on their own, FDA retreated and is allowing the state to validate NY labs in lieu of pursuing an Emergency Use Authorization (EUA) with FDA.

Congratulations to Roche for being allowed to be part of the solution to a problem government created.

We Can Stop This

We can stop it by any of these, or a combination:

Remember you only need to stop 3/4 of the transmisisons, or even just a bit over half would do. For instance if we find all cases within 3 days of symptoms, instead of 14 days later, then they only have 3 days to infect anyone else and that alone could be enough to stop this virus in a few weeks

South Korea are doing this. Italy is doing all the right things too. It is nerve wracking when the outbreak is still rising and shows no sign of stopping but there is always a delay of several days to a week.  You don’t see the effects right away.

No native covid19 cases in China outside of Hubei province on the 9th March. The 4 new cases were all imported from outside of China.

China are closing down 11 of their 16 makeshift hospitals because they are no longer needed – the largest of them with 2000 beds.

China are going to reopen schools this week and may lift the travel restrictions on Hubei province soon.

This underlines what the WHO have been saying – this virus can be contained. They only did lockdown of cities in Hubei province – in the other provinces it was mainly rapid case finding with their fever clinics, contact tracing, and public hygiene education and some other restrictions but not a total lock down.

A few weeks ago on 29th January all provinces in China were at level 1 “red” for risk the highest possible risk – the whole of China was red.

South Korea is close to containing their outbreak too, had less daily cases than they have had for two weeks.

Footnote:  A helpful chart from WHO

Meanwhile, back in the mass media world: 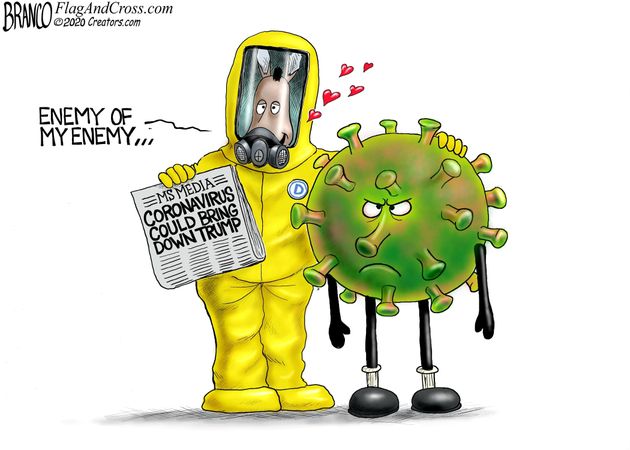