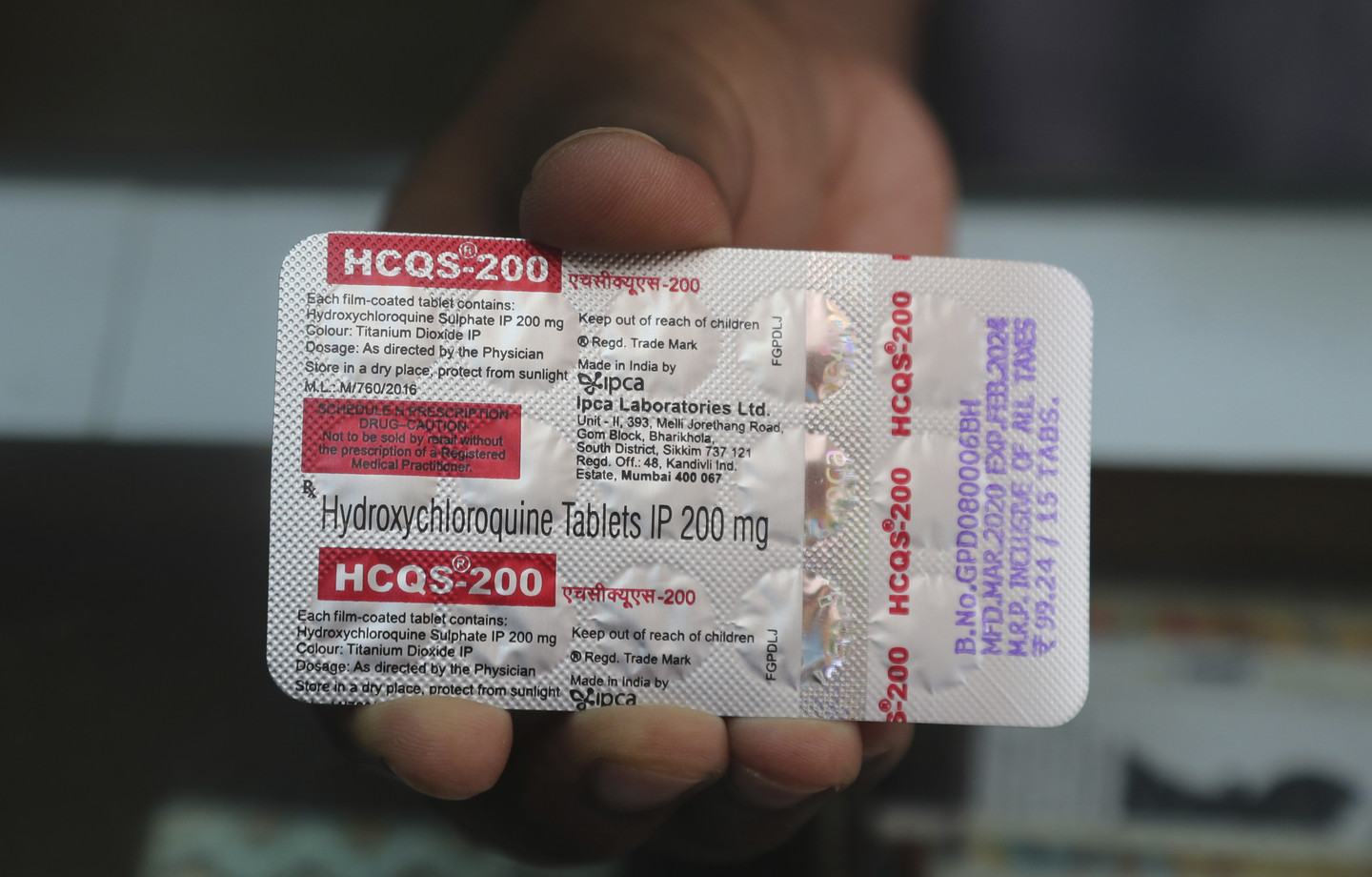 Steven Hatfill explains what happened to HCQ treatments against coronavirus in his Real Politics article An Effective COVID Treatment the Media Continues to Besmirch.  Excerpts in italics with my bolds.

After examples of the media disinformation campaign, Steven provides a brief recounting of what has transpired over the last half year pandemic. 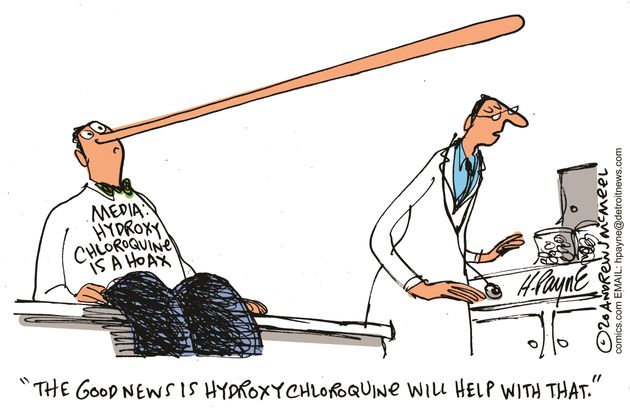 So what is the real story on hydroxychloroquine? Here, briefly, is what we know:

When the COVID-19 pandemic began, a search was made for suitable antiviral therapies to use as treatment until a vaccine could be produced. One drug, hydroxychloroquine, was found to be the most effective and safe for use against the virus. Federal funds were used for clinical trials of it, but there was no guidance from Dr. Anthony Fauci or the NIH Treatment Guidelines Panel on what role the drug would play in the national pandemic response. Fauci seemed to be unaware that there actually was a national pandemic plan for respiratory viruses.

Following a careful regimen developed by doctors in France, some knowledgeable practicing U.S. physicians began prescribing hydroxychloroquine to patients still in the early phase of COVID infection. Its effects seemed dramatic. Patients still became sick, but for the most part they avoided hospitalization. In contrast — and in error — the NIH-funded studies somehow became focused on giving hydroxychloroquine to late-presenting hospitalized patients. This was in spite of the fact that unlike the drug’s early use in ambulatory patients, there was no real data to support the drug’s use in more severe hospitalized patients.

By April, it was clear that roughly seven days from the time of the first onset of symptoms, a COVID-19 infection could sometimes progress into a more radical late phase of severe disease with inflammation of the blood vessels in the body and immune system over-reactions. Many patients developed blood clots in their lungs and needed mechanical ventilation. Some needed kidney dialysis. In light of this pathological carnage, no antiviral drug could be expected to show much of an effect during this severe second stage of COVID.

On April 6, 2020, an international team of medical experts published an extensive study of hydroxychloroquine in more than 130,000 patients with connective tissue disorders. They reaffirmed that hydroxychloroquine was a safe drug with no serious side effects. The drug could safely be given to pregnant women and breast-feeding mothers. Consequently, countries such as China, Turkey, South Korea, India, Morocco, Algeria, and others began to use hydroxychloroquine widely and early in their national pandemic response. Doctors overseas were safely prescribing the drug based on clinical signs and symptoms because widespread testing was not available.

However, the NIH promoted a much different strategy for the United States. The “Fauci Strategy” was to keep early infected patients quarantined at home without treatment until they developed a shortness of breath and had to be admitted to a hospital. Then they would they be given hydroxychloroquine. The Food and Drug Administration cluelessly agreed to this doctrine and it stated in its hydroxychloroquine Emergency Use Authorization (EUA) that “hospitalized patients were likely to have a greater prospect of benefit (compared to ambulatory patients with mild illness).”

In reality just the opposite was true. This was a tragic mistake by Fauci and FDA Commissioner Dr. Stephen Hahn and it was a mistake that would cost the lives of thousands of Americans in the days to come.

At the same time, accumulating data showed remarkable results if hydroxychloroquine were given to patients early, during a seven-day window from the time of first symptom onset. If given during this window, most infections did not progress into the severe, lethal second stage of the disease. Patients still got sick, but they avoided hospitalization or the later transfer to an intensive care unit. In mid-April a high-level memo was sent to the FDA alerting them to the fact that the best use for hydroxychloroquine was for its early use in still ambulatory COVID patients. These patients were quarantined at home but were not short of breath and did not yet require supplemental oxygen and hospitalization.

Failing to understand that COVID-19 could be a two-stage disease process, the FDA ignored the memo and, as previously mentioned, it withdrew its EUA for hydroxychloroquine based on flawed studies and clinical trials that were applicable only to late-stage COVID patients.

By now, however, some countries had already implemented early, aggressive, outpatient community treatment with hydroxychloroquine and within weeks were able to minimize their COVID deaths and bring their national pandemic under some degree of control.

In countries such as Great Britain and the United States, where the “Fauci-Hahn Strategy” was followed, there was a much higher death rate and an ever-increasing number of cases. COVID patients in the U.S. would continue to be quarantined at home and left untreated until they developed shortness of breath. Then they would be admitted to the hospital and given hydroxychloroquine outside the narrow window for the drug’s maximum effectiveness.

In further contrast, countries that started out with the “Fauci-Hahn Doctrine” and then later shifted their policy towards aggressive outpatient hydroxychloroquine use, after a brief lag period also saw a stunning rapid reduction in COVID mortality and hospital admissions.

Finally, several nations that had started using an aggressive early-use outpatient policy for hydroxychloroquine, including France and Switzerland, stopped this practice when the WHO temporarily withdrew its support for the drug. Five days after the publication of the fake Lancet study and the resulting media onslaught, Swiss politicians banned hydroxychloroquine use in the country from May 27 until June 11, when it was quickly reinstated.

The consequences of suddenly stopping hydroxychloroquine can be seen by examining a graph of the Case Fatality Ratio Index (nrCFR) for Switzerland. This is derived by dividing the number of daily new COVID fatalities by the new cases resolved over a period with a seven-day moving average. Looking at the evolution curve of the CFR it can be seen that during the weeks preceding the ban on hydroxychloroquine, the nrCFR index fluctuated between 3% and 5%.

Following a lag of 13 days after stopping outpatient hydroxychloroquine use, the country’s COVID-19 deaths increased four-fold and the nrCFR index stayed elevated at the highest level it had been since early in the COVID pandemic, oscillating at over 10%-15%. Early outpatient hydroxychloroquine was restarted June 11 but the four-fold “wave of excess lethality” lasted until June 22, after which the nrCFR rapidly returned to its background value.

Here in our country, Fauci continued to ignore the ever accumulating and remarkable early-use data on hydroxychloroquine and he became focused on a new antiviral compound named remdesivir. This was an experimental drug that had to be given intravenously every day for five days. It was never suitable for major widespread outpatient or at-home use as part of a national pandemic plan. We now know now that remdesivir has no effect on overall COVID patient mortality and it costs thousands of dollars per patient.

Hydroxychloroquine, by contrast, costs 60 cents a tablet, it can be taken at home, it fits in with the national pandemic plan for respiratory viruses, and a course of therapy simply requires swallowing three tablets in the first 24 hours followed by one tablet every 12 hours for five days.

There are now 53 studies that show positive results of hydroxychloroquine in COVID infections. There are 14 global studies that show neutral or negative results — and 10 of them were of patients in very late stages of COVID-19, where no antiviral drug can be expected to have much effect. Of the remaining four studies, two come from the same University of Minnesota author. The other two are from the faulty Brazil paper, which should be retracted, and the fake Lancet paper, which was.

Millions of people are taking or have taken hydroxychloroquine in nations that have managed to get their national pandemic under some degree of control. Two recent, large, early-use clinical trials have been conducted by the Henry Ford Health System and at Mount Sinai showing a 51% and 47% lower mortality, respectively, in hospitalized patients given hydroxychloroquine. A recent study from Spain published on July 29, two days before Margaret Sullivan’s strafing of “fringe doctors,” shows a 66% reduction in COVID mortality in patients taking hydroxychloroquine. No serious side effects were reported in these studies and no epidemic of heartbeat abnormalities.

This is ground-shaking news. Why is it not being widely reported? Why is the American media trying to run the U.S. pandemic response with its own misinformation? 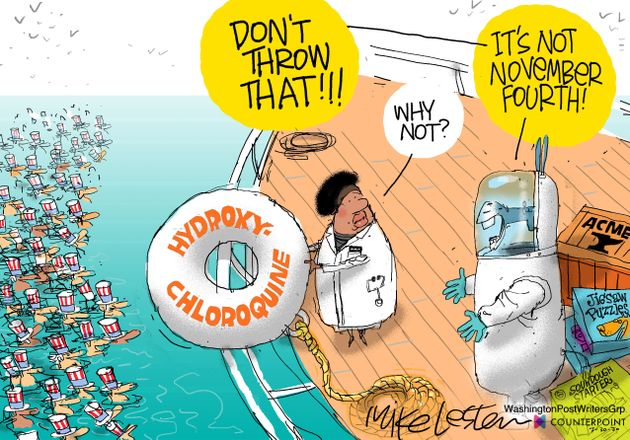 Steven Hatfill is a veteran virologist who helped establish the Rapid Hemorrhagic Fever Response Teams for the National Medical Disaster Unit in Kenya, Africa. He is an adjunct assistant professor in two departments at the George Washington University Medical Center where he teaches mass casualty medicine. He is principle author of the prophetic book “Three Seconds Until Midnight — Preparing for the Next Pandemic,” published by Amazon in 2019.