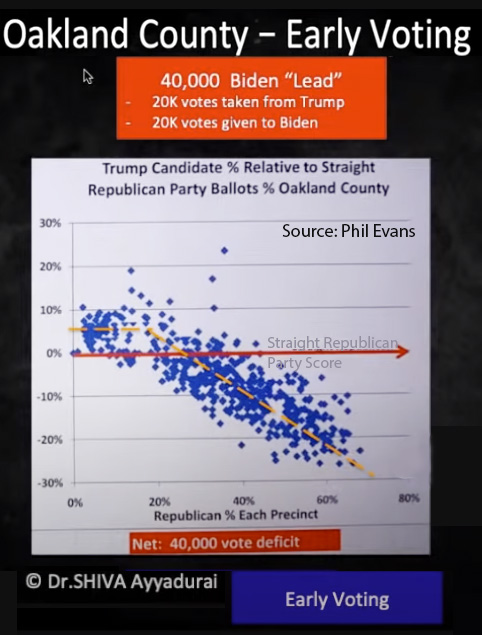 In addition to helping certify the presidential race, he said it’s imperative investigators identify the source of the irregularities before the state holds its two U.S. Senate run-off elections on Jan. 5 so they don’t repeat themselves.

But Favorito, who lives in the Atlanta area, said the Fulton County shift was so dramatic it seemed as if someone had “dumped” a huge batch of mail-in ballots for Biden into the system overnight.  “One candidate could not go up by 20,000 and the other do nothing — in Fulton County or any county in Georgia,” he asserted. “That’s just not going to happen.”

Added Favorito: “I think they’re going to find the root cause of the irregularity was something electronic, and I think it’s going to change the results substantially.”

“They knew good and well they should never have bought this system in the first place,” he said. “We explained that Dominion was rejected in Texas for failing to meet basic security standards before they bought it.”

Favorito suspects similar surges in Biden ballots may have taken place during the counting of mail-in ballots on other nights, including Election Night. On Nov. 3, Fulton County elections officials informed observers that they were shutting down the tabulation center before midnight, only to continue counting throughout the night while no one was watching.

Favorito fears that what he observed on Nov. 5 was not an isolated incident. “There could have been multiple 20,000-batch irregularities,” he said, “but they never got reported because they cleared out the observers.”

He does not rule out “ballot harvesting” as the culprit behind the sudden surges of mail-in votes for Biden.

He said the hundreds of drop boxes Raffensperger agreed to distribute at shopping centers and other cities throughout the state may have encouraged third parties to collect ballots in the name of other voters and stuff them into the boxes, which is illegal.

Kimberley A. Strassel writes at Wall Street Journal Harvesting the 2020 Election  Excerpts in italics with my bolds.

Pelosi’s top priority was remaking the electoral system. The virus gave her a boost.

Democrats grandly named their bill the For The People Act, but conservatives had better titles. This page called it the “Majority Preservation Act,” while the editors at National Review described it as an “Unconstitutional, Authoritarian Power Grab.” Senate Majority Leader Mitch McConnell decried the bill as a “naked attempt to change the rules of American politics to benefit one party,” and dubbed it the “Democrat Politician Protection Act.”

Mrs. Pelosi’s bill didn’t become law, despite her attempts this year to jam some of its provisions into coronavirus bills. But it turns out she didn’t really need it. Using the virus as an excuse, Democratic and liberal groups brought scores of lawsuits to force states to adopt its provisions. Many Democratic politicians and courts happily agreed. States mailed out ballots to everyone. Judges disregarded statutory deadlines for receipt of votes. They scrapped absentee-ballot witness requirements. States set up curbside voting and drop-off boxes. They signed off on ballot harvesting.

Meaning, “the fix” (as it were) was in well before anyone started counting votes. Pollsters aside, political operatives understood this election would be close—potentially closer in key states than it was in 2016. The Democratic strategy from the start, as evidenced by that legal onslaught, was to get rules in place that would allow them to flood the zone with additional mail-in ballots.

And of course there was harvesting—as these pages warned. This isn’t a new practice; candidates and campaigns have been honing it for years. Three years ago, the Palm Beach Post ran an expose on the practice in Florida. A North Carolina congressional race in 2018 was roiled by a ballot-harvesting operation, and a new election was ordered. This year simply offered the perfect environment to roll it out at new levels, and throughout the fall conservative groups were documenting examples.

Yet the beauty of ballot harvesting is that it is nearly impossible to prove fraud.

How many harvesters offered to deliver votes, only to throw away inconvenient ones? How many voters were pushed or cajoled, or even paid—or had a ballot filled and returned for them without their knowledge? And this is before questions of what other mischief went on amid millions of mailed ballots (which went to wrong addresses or deceased people) and reduced voter verification rules. As the Heritage Foundation’s election expert Hans von Spakovsky has explained, mail-in voting is the “single worst form of election possible” because “it moves the entire election beyond the oversight of election officials.”