Social justice activists have been arguing for some time that scientific societies and institutions need to address systemic sexism and racism in STEM disciplines. However, their rationale is often anything but scientific. For example, whenever percentages in faculty positions, test scores, or grant recipients in various disciplines do not match percentages of national average populations, racism or sexism is generally said to be the cause. This is in spite of the fact that no explicit examples of racism or sexism generally accompany the statistics. Correlation, after all, is not causation.

Without some underlying mechanism or independent evidence to explain a correlation of observed outcomes with population statistics, inferring racism or sexism in academia as the cause is inappropriate.

One might have hoped for more rigor from the leadership of scientific societies and research institutions. Alas, this has not been the case. In the current climate, many have simply adopted popular rhetoric and the jargon of critical theory has begun to dominate communications by these institutions. Pandering and virtue signalling have begun to generate proactive initiatives by the highest levels of the scientific community, often replacing the focus on science itself. Here are a few examples from the past few weeks alone.

In December, the American Physical Society (APS), the largest society of physicists in the world, sent out a letter to its membership arguing that Trump’s Presidential Executive Order 13950 on Combatting Race and Sex Stereotyping was “in direct opposition to the core values of the American Physical Society.” The order therefore needed to be rescinded in order to “strengthen America’s scientific enterprise.” The order (since rescinded by Biden) quoted Martin Luther King, stating that in government-supported scientific institutions people should “not be judged by the color of their skin but by the content of their character.” The order argued that materials from places like Argonne National Laboratories that equate “color blindness” and “meritocracy” with “actions of bias,” or from Sandia National Laboratories which state that an emphasis on “rationality over emotionality” is a characteristic of “white male[s],” were inappropriate training materials for government-supported science institutions.

The rescinded order concluded that “it shall be the policy of the United States not to promote race or sex stereotyping or scapegoating in the Federal workforce.”

APS did not stop there.  .  . This week it was announced that the American Physical Society will examine the demographic information associated with police behavior and the use of force in the cities considered. No criteria have been provided according to which these statistics will be scientifically evaluated. Poor areas afflicted by high crime may see racial minorities disproportionately reflected in arrest statistics. Will they now be disqualified, even though those very areas might benefit from the economic influx associated with huge scientific meetings? Possible evidence of systemic racism in police conduct—as opposed to the existence of isolated racist police officers—remains hotly debated with different studies reaching divergent conclusions.

Nevertheless, the APS appears to have embraced the ad hoc assumption that a police force may be deemed racist if its arrest rate or use of deadly force does not mimic population percentages for different racial groups.

Scientific societies like the APS are, for practical purposes, often managed by functionaries rather than scientists, so perhaps this kind of development is not all that surprising. More surprising, however, was a statement from Francis Collins, Director of the National Institutes of Health, the largest single agency supporting scientific research in the country. Collins apologized for existing “structural racism in biomedical research” and pledged to address the problem with sweeping changes. He did so at the behest of an Advisory Committee to the Director working group report that called on the NIH to “acknowledge the prevalence of racism and anti-Blackness in the scientific workforce.” And what evidence is provided of this alleged racism and anti-blackness? In 2011, a study found that black investigators had research funding rates 11 percent lower than white researchers, although by 2020 the success rate of black investigators had doubled to 24 percent, compared with 31 percent for white investigators.

Disparities in outcomes are, however, not themselves evidence of racism within the NIH. There is no evidence that the grant committees adjudicating these applications judged the proposals on anything but merit. Equality of opportunity is necessary to counter racism. While such equality did not exist in the past, recent gains suggest that the situation has changed. Assertions of structural racism and anti-blackness within the NIH community today are unwarranted based on this data alone. For the NIH leadership to take actions based on this unscientific conclusion is even more inappropriate.

These actions at the APS and NIH, while scientifically questionable, are nevertheless understandable, given societal pressures to address what are undoubtedly real sources of racism that exist in society. Other recent actions, however, make neither scientific nor logical sense. Some examples would seem comical were it not for their sinister implications.

A California initiative entitled “A Pathway to Equitable Math Instruction,” funded by the Bill and Melinda Gates Foundation, with partners including Lawrence Hall of Science at UC Berkeley among others, was recently sent to Oregon teachers by my state’s department of education. It identifies mathematics education as a potential source of racism. It is hard to imagine a field of intellectual inquiry more removed from human foibles than mathematics, but this 82-page document is largely devoid of mathematical concepts. Instead, its authors’ design was to “deconstruct racism in mathematics education.” To this end, various teaching methods are presented as characteristic of white supremacy, including an emphasis on getting the “right” answer, a requirement that students “show their work,” and an adherence to state standards. [For more on this see Why Progressives Hate Math ]

Meanwhile, a Canadian academic initiative entitled “Decolonizing Light” and sponsored by the “New Frontiers in Research” fund announced its commitment to studying “the reproduction of colonialism in and through physics” and examining “how colonial scientific knowledge authority was and is still reproduced in the context of light.” The description of the program on their website is as muddled as one might imagine: “Physics is considered as ‘hard’ and objective science, disconnected from social life and geopolitical history. This narrative both constitutes and reproduces inequality.”

This week, Scientific American, once a rigorous scientific publication, published an opinion column by several young scientists known for their campaign to call a “scientific strike” against racism following the death of George Floyd. The authors advocate changing the name of the James Webb Space Telescope because Webb, a former NASA administrator, was administrator when the federal government did not adequately respect LGBTQ rights. Webb is not incriminated as a racist or bigot, but as a servant of bigots. So who do the authors suggest that the telescope be named for? If encouraging diversity is the issue, perhaps it should be named the Vera Rubin Space Telescope, after the deceased astronomer who in the 1960s and ’70s provided some of the first compelling evidence of dark matter in our galaxy. Or perhaps the Jocelyn Bell Burnell Space Telescope, after the astrophysicist who, as a graduate student, help discover the first pulsars in 1967 and who some claim was overlooked when the Nobel Prize was awarded to her supervisor. Instead, the proposal is to rename the telescope the Harriet Tubman Space Telescope. Why? Not because Tubman might have made any contributions to astronomy, but because she was a conductor on the Underground Railroad that helped free black slaves in the South, during which she “likely used the North Star” to navigate to freedom.

In a more subtle way, reasonable advocates for greater diversity in science have also recently begun to suggest that racism in science at higher education institutions might explain existing group disparities. Shirley Malcom is a scientist and educator I know and admire for her tireless efforts at improving diversity. The American Association for the Advancement of Science recently named her to help lead their SEA (STEM Equity Achievement) Change effort, aimed at addressing “systemic problems of sexism and racism in STEM.” Malcom noted that the distinguished higher education institutions from which she earned degrees did not set out to serve black women. As she put it, “How do you begin to identify and support people like me?” I find this statement troubling. What identification is she seeking? Surely it shouldn’t be her race, but rather the talent she clearly possesses. Such universities are there to serve all talented students and help them fulfil their potential, independent of race, gender, or religion. When I first arrived at MIT I felt lucky. It was made quite clear to me what a privilege it was to be there. It was not a right, and I certainly never felt they had any obligation to serve me on the basis of my self-identification.

Backlash Against Racism Posing as Anti-Racism

In the face of this transformation, there has been little organized outcry from the scientific community. However, some are now speaking out. The Princeton mathematician Sergiu Klainerman has spoken out strongly against these intrusions of activism into science in particular and academia more generally. Most recently, Jeffrey Burl, an associate professor of Electrical and Computer Engineering at Michigan Technological University bravely wrote an open letter demanding an apology for what he called the “racist sentiments” expressed in his university’s Senate Resolution, which condemned white supremacy and racially motivated intolerance at his institution. He argued that these sentiments constituted a hostile work environment for white male scientists like himself, and that he had seen no signs of discrimination against women and people of color in his 28 years at the university. Instead, he argued that “I, as a white male, have been systematically discriminated against for 40 years.” He referred to the fact that when he was hired, there were two job openings, one of which was available to anyone, and one of which was only open to women. Since only a small percentage of the candidates were women, he argued that this hiring was clearly discriminatory. Needless to say, Burl now faces a petition demanding that he be fired.

Whatever one thinks of his interpretation of his experience, Burl was openly stating what many male scientists are afraid to discuss—that there is no clear evidence of systemic discrimination on the basis of race in academia, and that any examples of gender discrimination in recent decades have not involved discrimination against females. Rather, there has been a concerted effort at universities for at least 25 years to attempt to achieve gender equity in faculty ranks, often using affirmative action techniques that Burl suggests are discriminatory.

Science as a discipline is supposed to be based on empirical evidence. But if repeating a falsehood often enough makes it true, then science now risks creating a false reality, with grave implications for the future of research and for society more generally.

Lawrence M. Krauss is a theoretical physicist who has also written about science and public policy and about how science confronts religious dogma. He is president of The Origins Project Foundation and his newest book is The Physics of Climate Change.

Postscript No Wonder the French are Worried about American Institutions

From the Daily Mail:

‘Out-of-control woke leftism and cancel culture’ from the U.S is a threat to FRANCE because it ‘attacks’ the nation’s heritage and identity, 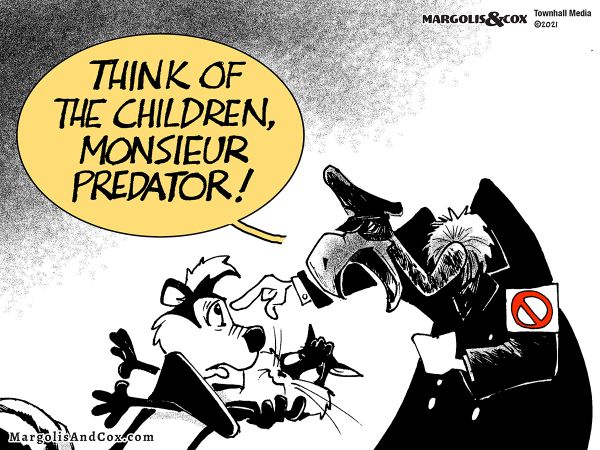