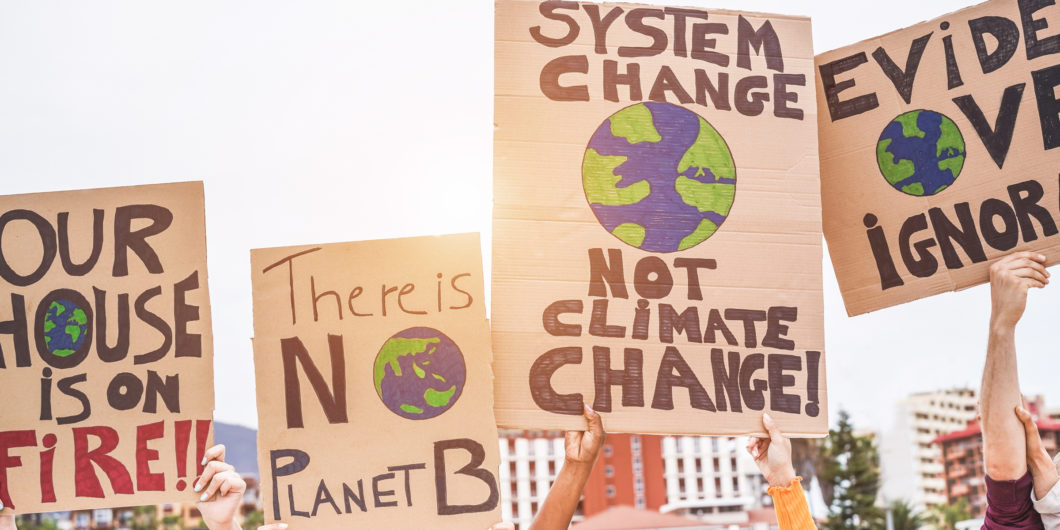 Peter J. Wallison and Benjamin Zycher examine the evidence in their Law & Liberty article What We Really Know About Climate Change.  Excerpts in italics with my bolds and added images.

The assumption that humans are the single most significant cause of climate change is unsupported by the available science.

The sixth Assessment Report (AR6) of the Intergovernmental Panel on Climate Change (IPCC) continues a long history of alarmist predictions with the deeply dubious statement that human-caused climate change has now become “irreversible.” President Biden and many others have called climate change an “existential threat” to humanity; and Biden claimed in his inaugural address to have heard from the Earth itself “a cry for survival.”

Hurricane Ida also has brought new claims about the dangers of climate change, but those assertions are inconsistent with the satellite record on tropical cyclones, which shows no trend since the early 1970s.

Yet the headline on the front page of the New York Times of August 12, 2021 was: “Greek Island Burns in a Sign of Crises to Come.” The accompanying article, continuing the multi-year effort of that newspaper to spread fears about climate change unsupported by evidence, argued that this was “another inevitable episode of Europe’s extreme weather [caused] by the man-made climate change that scientists have now concluded is irreversible.”

Almost every word in that sentence is either false or seriously misleading, continuing a multi-decade campaign of apocalyptic warnings about the effects of greenhouse gas emissions. Data on centuries and millennia of climate phenomena, constructed by scientists over many years around the world, show that the severe weather that the Times attributes to “man-made climate change” is consistent with the normal weather patterns and variability displayed in both the formal records and such proxy data as ice cores. In fact, there is little evidence that “extreme weather” events have become more frequent since 1850, the approximate end of the little ice age.

Increasing atmospheric concentrations of greenhouse gases have yielded detectable effects, but “scientists” in general have not, as the Times falsely stated, concluded that “extreme weather” is now “irreversible.” The statement itself comes from the “Summary for Policymakers” published as part of the most recent IPCC study of climate change; it is deeply problematic given the analyses and data provided in the scientific chapter (“The Physical Science Basis”) of the report to which the Times referred. Scientists disagree sharply about the significance of climate change and the analytic tools used to evaluate it, let alone whether it is “irreversible.”

There has been no upward trend in the number of “hot” days between 1895 and 2017; 11 of the 12 years with the highest number of such days occurred before 1960. Since 2005, NOAA has maintained the U.S. Climate Reference Network, comprising 114 meticulously maintained temperature stations spaced more or less uniformly across the lower 48 states, along with 21 stations in Alaska and two stations in Hawaii. They are placed to avoid heat-island effects and other such distortions as much as possible. The reported data show no increase in average temperatures over the available 2005-2020 period. In addition, a recent reconstruction of global temperatures over the past 1 million years—created using data from ice-sheet formations—shows that there is nothing unusual about the current warm period.

These alarmist predictions almost always are based upon climate models that have proven poor at reconstructing the past and ongoing temperature record. For example, the Times article implies that wildfires will increase in the future as the earth grows hotter. But there has been no trend in the number of U.S. wildfires in the 35 years since 1985, and global acreage burned has declined over past decades.

Unable to demonstrate that observed climate trends are due to human-caused (anthropogenic) climate change—or even that these events are particularly unusual or concerning—climate catastrophists will often turn to dire predictions about prospective climate phenomena. The problem with such predictions is that they are almost always generated by climate models driven by highly complex sets of assumptions about which there is significant dispute. It goes without saying that the predictions of models that cannot reconstruct what has happened in the past should not be given heavy weight in terms of predictions about the future, but that is exactly what many analysts are doing.

Extreme weather occurrences are likewise used as evidence of an ongoing climate crisis, but again, a study of the available data undercuts that assessment. U.S. tornado activity shows either no increase or a downward trend since 1954. Data on tropical storms, hurricanes, and accumulated cyclone energy (a wind-speed index measuring the overall strength of a given hurricane season) reveal little change since satellite measurements of the phenomena began in the early 1970s. The Palmer Drought Severity Index shows no trend since 1895.

Rising sea levels are another frequently cited example of the impending climate crisis. And yet sea levels have been rising since at least the mid-19th century, a phenomenon unlikely to have been caused only by human activity. The earth has been warming due to both natural and anthropogenic causes, resulting in some melting of sea ice, and a thermal expansion of sea water; the degree to which rising sea level has been caused by man is unknown. And the current rate of sea-level rise as measured by the satellites is 3.3 millimeters per year, or about 13 inches over the course of a century. Will that yield a crisis?

The data reported by the National Oceanic and Atmospheric Administration show that temperatures have risen and fallen since 1850, with an overall upward movement of about 1 degree C for 1850 through 2020. The 1910-1945 warming—which was very roughly the same magnitude as that observed from the mid-1970s through about 2000—is of particular interest in that it cannot be explained by higher greenhouse-gas concentrations, which increased from 300 parts per million to 310 parts per million over that period. This reinforces the commonsense observation that temperatures result from some combination of natural and anthropogenic influences, but alarmist reports seldom if ever suggest that there is any cause of warming other than the latter.

It is important to recognize that the assumption of many politicians, environmental groups, media sources like the New York Times, and no small number of scientist-activists—that humans are the single most significant cause of climate change—is unsupported by the available science. Such an absence of evidence should produce humility among this group, but it seems to foster more alarmism. At the very least, it should make Americans think twice before embracing radical solutions to a supposed problem that may not be important.

Much of the mainstream press has touted, loudly, the alarmist conclusions of the latest IPCC report—amusingly, the IPCC AR6 provides a “Headlines Statements” link to assist alarmist politicians and media—but that reporting has obscured its problems, very real and very large. The report concedes that the mainstream climate models on the whole overstate warming for any given set of parameters and assumptions, but it then relies on those models for predictions about the future.

The report concedes as well that the most extreme among its alternative scenarios— “RCP8.5”—has a likelihood that “is considered low,” but then uses RCP8.5 more than any other scenario. The report pretends to measure separately the magnitudes of natural and anthropogenic warming, but in reality does not do so (see Figure SPM.2); instead, it assumes away natural influences, which are asserted to have an average effect of zero. The IPCC models in summary have only two important variables: greenhouse gases, which have a warming effect, and sulfate aerosols, which have a cooling effect. That is why the IPCC models cannot explain the warming observed from 1910-1945. IPCC assumes, but does not attempt to model, a zero effect of sunlight variation, volcanic eruptions, and other such natural phenomena.

The fact is that we don’t understand all the elements in the complex climate system—the effects of clouds alone are understood poorly—and it is beyond irresponsible to adopt policies on the basis of flawed model projections that would slow economic growth in the US and elsewhere. That is a senseless and dangerous policy, which will only hurt people around the world who are striving to create better lives for themselves and their families.