This post is the fourth of five to alert readers to a compilation of the scientific and economic case against the claims of IPCC supporters and anti-fossil fuel activists. David Stockman provides the evidence and the arguments against the IPCC policy framework in a series of five essays published at International Man under the title The GreenMageddon and What It Means for You. I will state the five themes he develops in his essays, along with some excerpts and images to illustrate the main points. Here is the fourth theme overview and discussion.

4. Zero Carbon is suicidal because it requires cutting off essential energy supplies with nothing to replace them. Renewables can not keep pace with increasing electrical demand, let alone replace any baseload thermal power plants with wind or solar generation. Nor will hydro or nuclear power cover the losses from shuttering thermal power plants. 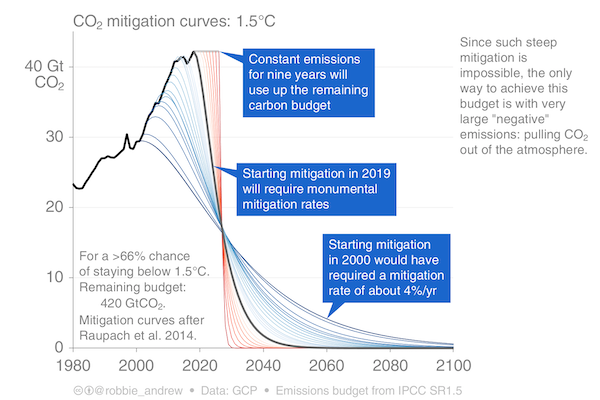 The chart below dramatically underscores why the CO2 witch-hunt is such a deadly threat to future prosperity and human welfare. To wit, even after decades of green energy promotion and huge subsidies from the state, renewables accounted for only 5% of primary global energy consumption in 2019 because:

By contrast, the 84% share attributed to oil, natural gas and coal is actually far larger in practical terms as we look into the future. That’s because most of the prime hydro sources have been tapped out long ago and are therefore not a meaningful source of growth. During the last 10 years, for example, US hydro-power output has only increased from 275 billion KWh to 288 billion KWh or by barely 0.24% per annum.

Likewise, nuclear power capacity outside of China stopped growing decades ago due to massive political and regulatory resistance. Germany, for example, is in the process of closing its last nuclear plants from a fleet that once generated 170,000 GW hours annually (2000) and is now generating only 75,000 GW hours, with a zero target by the year 2030. Even in the US, nuclear power remains dead in the water, with annual output rising from 754 billion KWh in 2000 to just 809 billion KWh in 2019.

Beyond that, the Climate Howlers are not talking about a gradual substitution of solar and wind for the three fossil based sources of primary energy as existing plants reach the end of their useful lives over the next 50 years.

To the contrary, zero net CO2 emissions targets for 2050 will require the massive early retirement and dismantlement of perfectly good power plants and tens of millions of internal combustion (IC) engine vehicles. 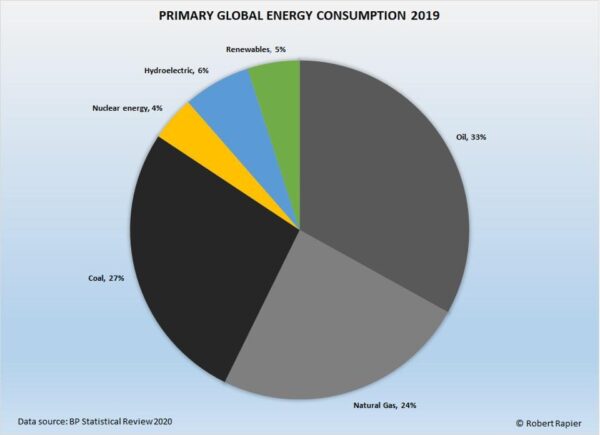 The prospect of substituting green power for existing fossil fuel capacity over the next several decades is where the rubber meets the road. But to grasp the full extent of the impending calamity it is necessary to recall that Keynesian GDP accounting inherently obfuscates the true economic cost in a drastically downward direction.

In fact, Keynesian GDP accounting is just the modern iteration of Frederic Bastiat’s famous “broken window fallacy”. Gross capital spending gets added to the total of GDP with no offset for depreciation and asset write-offs. That’s why, we suppose, climate change activists get all giddy about the alleged economic growth benefits and job gains from green investment: They just don’t count all the assets wasted and jobs lost by shutting down efficient coal mines or fossil-fired utility plants.

Nor are we talking about small amounts. To come even close to the utterly ridiculous COP26 target of net zero emissions by 2050 literally tens of trillions worth of fossil-fired power plants, heating units, chemical processing plants and internal combustion engine vehicles would have to be decommissioned and taken out of service long before their ordinary useful economic lives had been reached.

Fossil fuel consumption in the electric power utility sector—the only sector where green energy has even made a dent—-has hardly declined at all.

So the question recurs, how in the world do these lame-brains expect to get to zero CO2 emissions from the utility sector when over the last 19-years, the rate of fossil-fired production has declined by a trivial –0.20% per annum.

Moreover, as we suggested above regarding the global balances, there is no reason whatsoever to expect any material displacement of fossil-based power production by nuclear or hydro. Combined these two sectors produced 1,097 billion KWhs in 2019, but if anything production is likely to fall in the next several decades.

That’s right. In the last quarter quarter century there has been a grand total of two nuke plants commissioned. This means quite evidently that the nation’s grand total of 94 operating commercial nuclear reactors at 56 nuclear power plants in 28 states are old as the hills— averaging 25-40 years old and heading for decommissioning in the normal course.

The implication cannot be gainsaid. Unless there is a total political reversal with respect to nuclear power, the 809 billion KWHs generated in 2019, which represented nearly 20% of total utility output, will likely be shrinking from normal retirements faster than new plants can be licensed, built and made operational, a process which typically takes well more than a decade.

How Will Growing Demand for Power Be Met?

Finally, there is the matter of growth. Even at the tepid level of GDP growth during the last decade, and despite continued improvements in the efficiency of electrical power use in the US economy, total power output rose from 3,951 billion KWHs in 2009 to 4,127 billion KWhs in 2019, representing a modest 0.44% per annum growth rate.

Then again, a continuation of that modest growth trend—which would be the minimal gain compatible with a continued slow rise in real GDP—would result in total power output requirements of 4,427 billion KWhs by 2035 or 300 billion KWHs more than current levels.

So here’s the skunk in the woodpile. Total solar and wind-fueled power output in 2019 was just 367 billion KWhs or 8.9% of total utility output. That is, it will require the equivalent of fully 82% of current so-called green power production just to supply projected system growth. And that’s to say nothing of replacing nuclear production that is likely to be falling due to retirements and obsolescence or, more importantly, displacing some of the 2,590 billion KWhs of fossil production still in the nation’s electrical power grid.

Let us re-iterate: Unless a large share of that 2,590 billion KWhs of capacity is shuttered, the idea of zero net CO2 emissions is a pipe dream.

At the same time, it would take trillions of taxpayer subsidies to lift the current 367 billion KWhs of green power production toward even half of power requirements by 2035, which would exceed 2,200 KWhs. And that simply isn’t going to happen in a month of Sundays.

Moreover, that’s not even the half of it. Green power production, and especially wind which accounted for 4X more output than solar in 2019, ( 295 billion KWhs versus 72 billion KWhs) is highly intermittent based on seasonal patterns and daily wind strength. Nationally, wind plant performance tends to be highest during the spring and lowest during the mid-to late summer, while performance during the winter (November through February) is around the annual median. However, this pattern can vary considerably across regions, mostly based on local atmospheric and geographic conditions.

In a word, to get the same output and reliability as gas or coal-fired base-load plants, green power plants need to be drastically oversized both in terms of maximum output capacity and back-up storage units. As shown below, for most regions of the country, median monthly wind capacity factors range between just 25% and 35%. 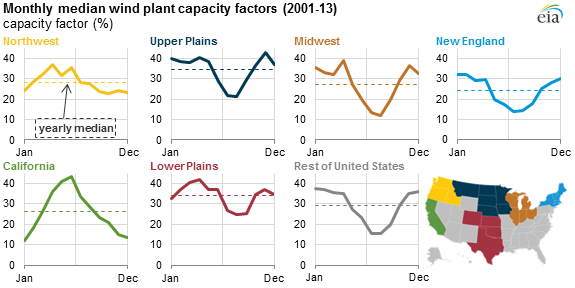 Needless to say, low capacity factors mean high all-in costs for electrical energy delivered to the grid. Analysts use a concept to capture this called LCOE (levelized cost of energy), which is the present value of total cost over the lifetime of a plant divided by the cumulative amount of electricity generated over the lifetime.

Accordingly, the cost of funding power output growth plus displacement of substantial amounts of fossil fired production would be staggering. Recent detailed study by the Institute for Energy Research show the LCOE calculations for the range of fuels sources:

LCOE Per Megawatt Hour Of Capacity:

These differentials between conventional and green sources of power generation are clearly staggering and contradict the constant propaganda from the Climate Howlers, who falsely claim that solar and wind are cheaper than existing power sources.

But as we will amplify in the final installment (Part 5), the actual scenario is far more forbidding than even these all-in cost differentials would suggest. That’s because the second part of the green agenda is to convert the nation’s efficient fleet of 285 million IC engine vehicles to electric battery power and 70 million natural gas and oil heated homes to green electricity, among others.

What that will do, of course, is make peak power demand swings on the grid far more extreme—even violent—just as the reliability of a green-powered utility sector falls sharply.

GreenMageddon is exactly where we are heading. 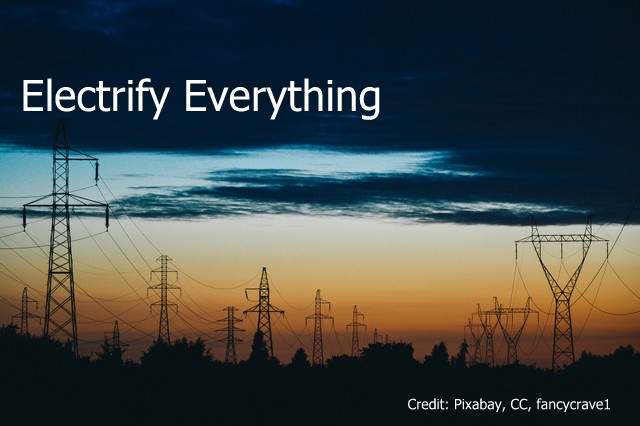