A previous series of posts here provided the case made by David Stockman against the IPCC hurryup agenda (David Stockman: Resist the GreenMageddon).  It is a dangerous delusion that you can convert in a decade an energy platform that evolved over 200 years.  And particularly wrongheaded to start by stopping energy supplies without anything replacing them. As put recently by Bill Blain (excerpts in italics with my bolds):

What COP26 protests highlights is how polarised Green politics are on collision course with the economy and growth. It’s going to take years to wean the economy off fossil fuels, but protestors will demand it happens now! Governments have politically committed themselves to a Green future, but are only just waking up to the reality of the need to transit from fossil fuels to renewables – which isn’t feasible without a long-term plan.

Much as I admire the passion of green campaigners, the current volatility of energy pricing demonstrates a massive underlying transition problem and political naivety.

We can’t fundamentally change energy provision overnight. Climate protesters furious this generation have “stolen” their futures will be even less happy if they succeed in reversing economic growth. The result will be to ensure billions of children as yet unborn don’t just face rising temperatures and sea-levels, but also chronic poverty, unemployment, starvation, migration and rising conflict over the environment – water being the primary threat.

While “democratic” western nations may embrace Degrowth populism – nations like China will not.

It doesn’t need to be a frying pan vs fire choice, but that’s not the way popular politics work.

In this context, a battle has been joined in Europe over the paradigm of the ‘Green Energy Transition.”  An article in Euractiv is LEAKED: Paper on gas and nuclear’s inclusion in EU green finance rules.  Excerpts in italics with my bolds.

A proposal to bring both nuclear power and natural gas into the bloc’s green finance taxonomy is circulating in Brussels. The paper has been branded as a “scientific disgrace” by campaigners who warned it would damage the EU’s credibility on green finance.

The so-called “non-paper”, obtained by EURACTIV, lays out detailed technical criteria for gas to qualify as a transitional activity under the EU’s sustainable finance rules.

To qualify as a “sustainable” investment, gas power plants or cogeneration facilities must not emit more than 100 grams of CO2 equivalent per kilowatt-hour, according to the draft paper.

It comes in the wake of declarations by European Commission President Ursula von der Leyen, who said the EU executive would soon table proposals on gas and nuclear as part of the bloc’s green finance rulebook.

“We need more renewables. They are cheaper, carbon-free and homegrown,” von der Leyen wrote on Twitter after an EU summit meeting two weeks ago where leaders debated the bloc’s response to rising energy prices.

“We also need a stable source, nuclear, and during the transition, gas. This is why we will come forward with our taxonomy proposal,” she added.

Gas as a ‘transitional activity’

The 100gCO2 emissions criteria is the same as earlier proposals circulated last year, which were rejected as too stringent by a group of 10 pro-gas EU countries who threatened to veto the proposal.

To assuage critics concerns, the paper lays out additional criteria for gas plants to qualify as a “transitional activity”, accompanied by a sunset clause (until 31 December 2030) for the commissioning of new plants.

For gas power plants, these are the criteria to qualify as a “transitional activity”:

For cogeneration plants, these are the criteria to qualify as a “transitional activity”:

Campaigners denounced those criteria as “radically weaker” than previous plans drafted by the European Commission.

“This proposal is a scientific disgrace that would deal a fatal blow to the taxonomy,” said Henry Eviston, spokesman on sustainable finance at WWF European Policy Office.

Campaigners were unsure about the origin of the non-paper. But diplomats who spoke to EURACTIV at an EU summit two weeks ago said France has been working behind the scenes to forge a compromise on the taxonomy that would satisfy supporters of gas and nuclear power.

At the initiative of Paris, representatives from like-minded EU countries held a meeting on 18 October to debate nuclear and natural gas in the context of the taxonomy, the EU diplomat said. The meeting was attended by Bulgaria, Cyprus, Czechia, Finland, France, Greece, Hungary, Malta, Poland, Romania, Slovakia, and Slovenia.

According to the same diplomatic source, participants discussed compromise proposals for technical criteria to assess the sustainability of gas and nuclear power plants.

On nuclear, the “non-paper” builds on the EU’s Joint Research Centre (JRC) recommendations, which concluded in a July report that nuclear power was safe and therefore eligible for a green label under the taxonomy.

The paper does not propose detailed sustainability criteria at this stage and merely divides nuclear power production activities into four categories:

The “non-paper” comes in the wake of a meeting of EU energy ministers last week where twelve EU countries spoke in favour of nuclear’s inclusion in the taxonomy. 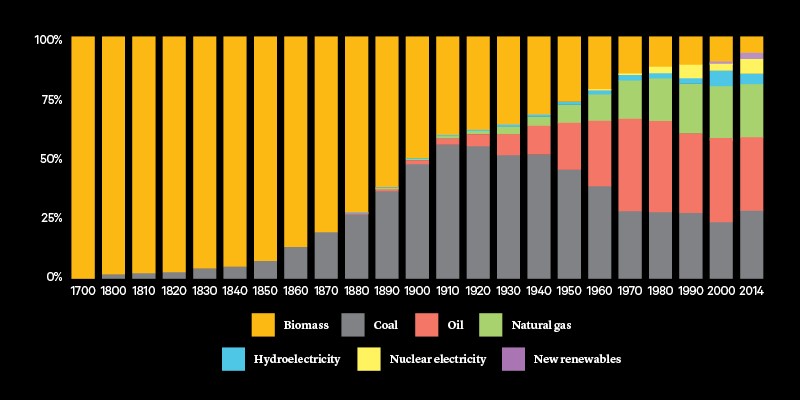 Thanks to Bill Gates we have this helpful graph showing the progress of human civilization resulting from shifts in the mix of energy sources.

Before the 19th century, it is all biomass, especially wood. Some historians think that the Roman Empire collapsed partly because the cost of importing firewood from the far territories exceeded the benefits. More recently, the 1800’s saw the rise of coal and the industrial revolution and a remarkable social transformation, along of course with issues of mining and urban pollution. The 20th century is marked first by the discovery and use of oil and later by natural gas. Since the chart is proportional, it shows how oil and gas took greater importance, but in fact the total amount of energy produced and consumed in the modern world has grown exponentially. So energy from all sources, even biomass has increased in absolute terms.

Decarbonists in Denial of History

Against this backdrop of imperatives against fossil fuels, we have Lessons from technology development for energy and sustainability by Cambridge Professor Michael J. Kelly (H/T Friends of Science). Excerpts in italics with my bolds.

Abstract: There are lessons from recent history of technology introductions which should not be forgotten when considering alternative energy technologies for carbon dioxide emission reductions. (Synopsis is at the Footnote red link)