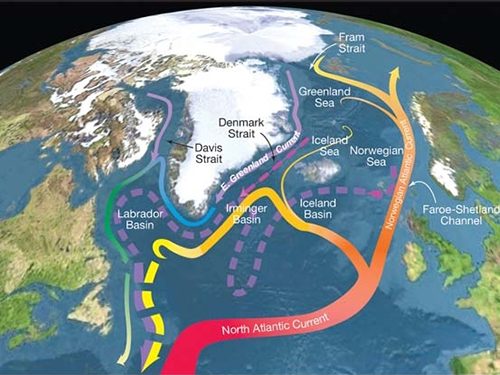 With the lack of global warming and the steep decline of surface temperatures the last 6 to 8 months, climatists are pivoting to the notion invented by the infamous M. Mann, AKA Mr. Hockey Stick (aiming to erase the Medieval warming period).  The reasoning is convoluted, as you might expect given the intent to blame cold weather on global warming.  The claim is that burning fossil fuels causes the North Atlantic Current to slow down and bring cold temperatures to the Northern Hemisphere.  The video below is an excellent PR piece promoting this science fiction as though it were fact.

There is debate about slowing of the Atlantic Meridional Overturning Circulation (AMOC), a key component of the global climate system. Some focus is on the sea surface temperature (SST) slightly cooling in parts of the subpolar North Atlantic despite widespread ocean warming. Atlantic SST is influenced by the AMOC, especially on decadal timescales and beyond. The local cooling could thus reflect AMOC slowing and diminishing heat transport, consistent with climate model responses to rising atmospheric greenhouse gas concentrations.

Here we show from Atlantic SST the prevalence of natural AMOC variability since 1900. This is consistent with historical climate model simulations for 1900–2014 predicting on average AMOC slowing of about 1 Sv at 30° N after 1980, which is within the range of internal multidecadal variability derived from the models’ preindustrial control runs. These results highlight the importance of systematic and sustained in-situ monitoring systems that can detect and attribute with high confidence an anthropogenic AMOC signal.

Global surface warming (global warming hereafter) since the beginning of the twentieth century is unequivocal, and humans are the main cause through the emission of vast amounts of greenhouse gases (GHGs), especially carbon dioxide (CO2)1,2,3. The oceans have stored more than 90% of the heat trapped in the climate system caused by the accumulation of GHGs in the atmosphere, thereby contributing to sea-level rise and leading to more frequent and longer lasting marine heat waves4. Moreover, the oceans have taken up about one third of the total anthropogenic CO2 emissions since the start of industrialization, causing ocean acidification5. Both ocean warming and acidification already have adverse consequences for marine ecosystems6. Some of the global warming impacts, however, unfold slowly in the ocean due to its large thermal and dynamical inertia. Examples are sea-level rise and the response of the Atlantic Meridional Overturning Circulation (AMOC), a three-dimensional system of currents in the Atlantic Ocean with global climatic relevance7,8,9,10.

[Comment: The paragraph above is the obligatory statement of fidelity to the Climatist Creed. All the foundational claims are affirmed with references to prove the authors above reproach, and not to be dismissed as denialists.  As further evidence of their embrace of IPCC consensus science, consider the diagrams below. 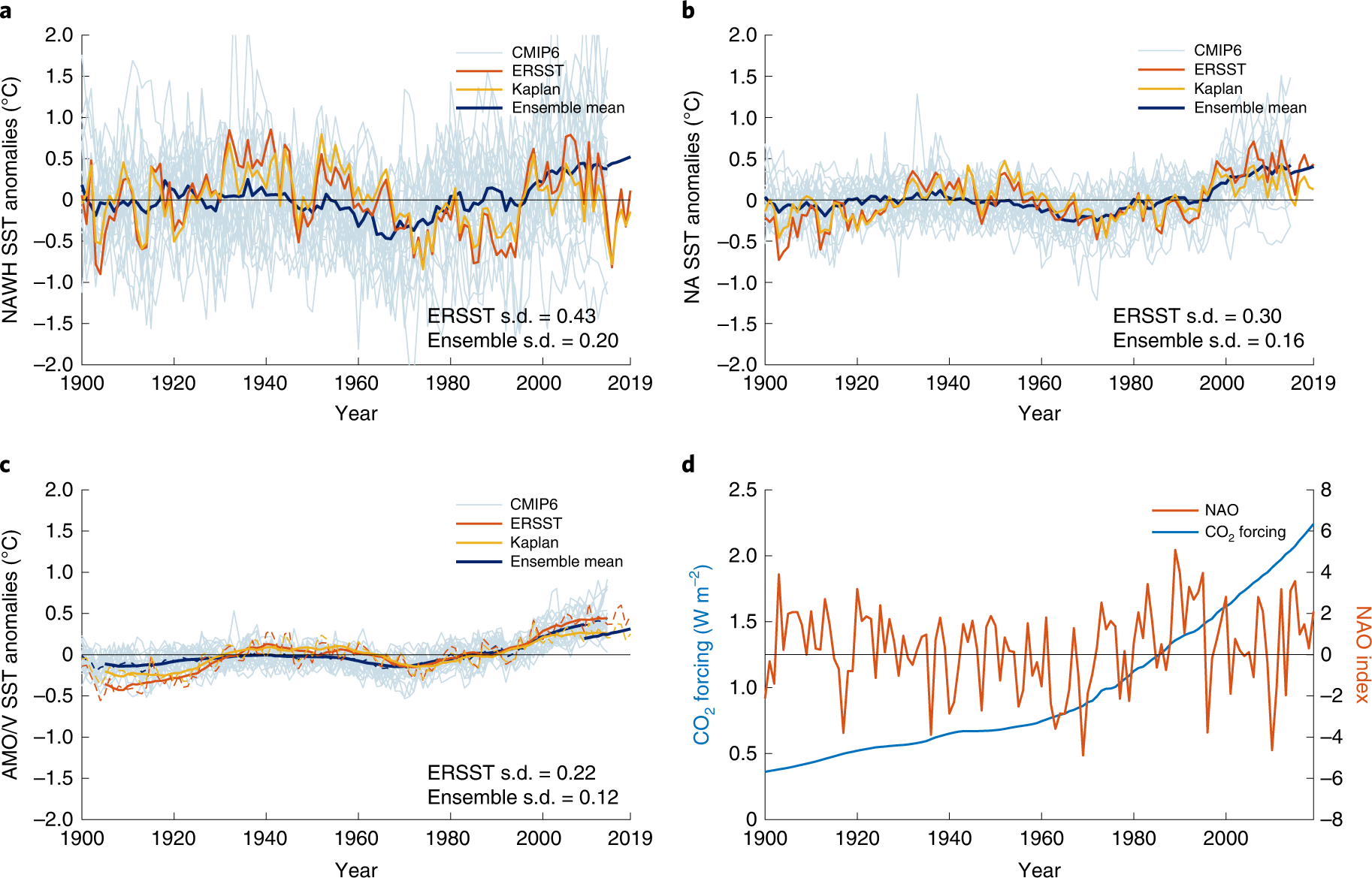 Chart d shows the NAO fluxes compared to a CO2 forcing curve based upon the much criticized RCP 8.5 scenario, which is not “business-as-usual” but rather “business-impossible.” Using it shows the authors bending over backwards to give every chance for confirming the alarming slowdown narrative.  The next paragraph gives the entire game away]

Climate models predict substantial AMOC slowing if atmospheric GHG concentrations continue to rise unabatedly1,11,12,13,14. Substantial AMOC slowing would drive major climatic impacts such as shifting rainfall patterns on land15, accelerating regional sea-level rise16,17 and reducing oceanic CO2 uptake. However, it is still unclear as to whether sustained AMOC slowing is underway18,19,20,21,22. Direct ocean-circulation observation in the North Atlantic (NA) is limited9,23,24,25,26,27. Inferences drawn about the AMOC’s history from proxy data28 or indices derived from other variables, which may provide information about the circulation’s variability (for example, sea surface temperature (SST)21,29,30, salinity31 or Labrador Sea convection32), are subject to large uncertainties.

Observed SSTs and a large ensemble of historical simulations with state-of-the-art climate models suggest the prevalence of internal AMOC variability since the beginning of the twentieth century. Observations and individual model runs show comparable SST variability in the NAWH region. However, the models’ ensemble-mean signal is much smaller, indicative of the prevalence of internal variability. Further, most of the SST cooling in the subpolar NA, which has been attributed to anthropogenic AMOC slowing21, occurred during 1930–1970, when the radiative forcing did not exhibit a major upward trend. We conclude that the anthropogenic signal in the AMOC cannot be reliably estimated from observed SST. A linear and direct relationship between radiative forcing and AMOC may not exist. Further, the relevant physical processes could be shared across EOF modes, or a mode could represent more than one process.

Neither of these datasets suggest major AMOC slowing since 1980, and neither of the AMOC indices from Rahmstorf et al.20 or Caesar et al.21 show an overall AMOC decline since 1980.

From the Energy MIx Changes in Atlantic Current May Fall Within Natural Variability.

In the February, 2022, edition of the journal Nature Geoscience, researchers at the University of Maryland Center for Environmental Science urged more detailed study of the notoriously complex Atlantic Meridional Overturning Circulation (AMOC). Now, oceanographer Mojib Latif and his team from the GEOMAR Helmholtz Centre for Ocean Research in Kiel, Germany are repeating that call in a paper just published in the journal Nature Climate Change.

The latest study describes the AMOC as a “three-dimensional system of current in the Atlantic Ocean with global climatic relevance.”

The February study responded to an August 2021 warning from the Potsdam Institute
that the AMOC has become wildly unstable and dangerously weak
due to global warming caused by human activity.

The authors of the latest study affirm that the Earth’s oceans have taken up more than 90% of the accumulated heat and roughly a third of all CO2 emissions since the dawn of the industrial age, leading to clearly measurable and devastating impacts like marine heat waves, sea level rise, and ocean acidification.

But it isn’t easy to confirm that the Atlantic circulation is actually slowing, partly because the ocean possesses such “large thermal and dynamical inertia.”

It is also extremely difficult to directly observe ocean circulation patterns in the North Atlantic, and proxies like sea surface temperature are “subject to large uncertainties,” the scientists say. Based on the available data, the GEOMAR study attributes localized sea surface cooling in the North Atlantic since 1900 to natural AMOC variability—not, as had been hypothesized, to a global heating-induced breakdown in the AMOC’s capacity to transfer heat.