In 1995 many people saw the cli-sci-fi (Climate Science Fiction) thriller based on polar ice melting and all land surface covered with water. 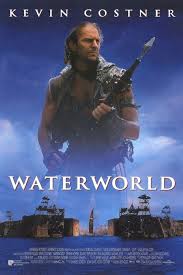 But that hypothetical world is not the subject of this post, rather it is our very own planet earth just as it is today. 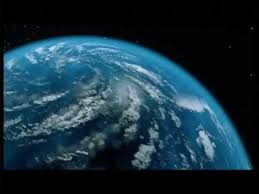 We humans, parochial as we are, imagine the earth’s surface to be land because that is where we live. In fact, the earth’s surface is 71% water, and the Northern Hemisphere (NH) consists of 30% water and 20% land, while the SH is a whopping 41% water and only 9% land. I was reminded of this fact recently while looking at Australian temperature records. The image below shows the effect of living on a piece of land upon a water world.

“Warming over Australia has been consistent with warming in the surrounding oceans.”

Indeed, how could it be otherwise for an island continent surrounded by water? The graph above shows a gentle rising of sea surface temperatures (SST) following the end of the Little Ice Age, overlaid with various ocean shifts (ENSO, AMO, NAO, etc.). Since 84% of Australians live within 50 km of the coast, and weather stations tend to be located where people live, it’s not surprising that the land surface temperature records mimic the sea surface variations.

But the effect is not limited to Australia. Climate research centers estimate global mean surface temperatures weighted according to grids, so those metrics are dominated by the ocean SSTs. 2014 was warm because of the mild undeclared El Nino, which persists today and gives hope to those wanting a record warm year in 2015.

But this is not about CO2. It has everything to do with water heated by shortwave solar radiation, stored and circulating in complex patterns, driven by the temperature differential between the equator and the poles. Scientists are gaining insight into the temperature dynamics of our water world.

Among the oceans, the Pacific is the gorilla whose fluctuations drive changes across the water world. Short-term ENSO events ripple globally, and in the longer-term, there are effects from the Interdecadal Pacific Oscillation (IPO), not to be confused with an Initial Public Offering. Here are some recent research findings:

“Annual surface air temperature is positively correlated with the IPO index (i.e., higher T during warming IPO phases such as 1924–1945 and 1977–1998) over western North America except its Southwest, mid-latitude central and eastern Asia, and central and northern Australia, but the correlation is negative over northeastern North America, northeastern South America, southeastern Europe, and northern India. Annual precipitation tends to be higher (lower) during warm (cold) IPO phases such as 1924–1945 and 1977–1998 (1946–1976 and 1999–2012) over southwestern North America, northern India, and central Argentina, while it is the opposite over the maritime continent including much of Australia, southern Africa, and northeastern Asia (Fig. 4b).”

“Besides the direct impacts on decadal variations in T and P, we also found some decadal modulations of ENSO’s influence on T and P on multi-year timescales by the IPO over northeastern Australia, northern India, southern Africa and western Canada.”

“Thus, the IPO is an ENSO-like low-frequency mode not just in its SST and SLP patterns (Zhang et al. 1997), but also in its impacts on T and P and atmospheric fields. These results imply that many of the surface and atmospheric processes associated with ENSO also apply to the IPO phase changes, with the warm (cold) IPO phase resembling El Nino (La Nina). Our results also suggest that it is important to predict IPO’s phase change for decadal climate predictions.”

From: The influence of the Interdecadal Pacific Oscillation on Temperature and Precipitation over the Globe Bo Dong • Aiguo Dai 2015 http://www.cgd.ucar.edu/cas/adai/papers/DongDai-CD2015-IPO.pdf

So let’s see how those warming and cooling periods show up in the SST historical records. HadSST3 dataset is available here:
http://www.metoffice.gov.uk/hadobs/hadsst3/data/download.html

I analyzed the annual global record and got the following results:

If those trends look familiar, it’s because you see the same pattern in any of the global surface temperature datasets.

Living on our water world means our temperatures and precipitation fluctuate according to ocean circulations and oscillations, especially ENSO and IPO patterns in the Pacific basin.

Climate is the continuation of oceans by other means. Dr. Arnd Bernaerts

I think SSTs are a reasonable proxy for natural variability over the last century or so. The long-term trend is 0.5C/century with multi-decadal periods as high as +1.7C/century, and as low as -0.3C/century. The latter one was enough to cause an ice age scare.

In advance of COP Paris, some want to project warming of +1.5C as requiring action. We’ve been there twice already recently, and much warmer still in the distant past.