Disney animation of “Br’er Rabbit and the Tar Baby” from Songs of the South, a collection of Uncle Remus American folk tales.

On Nov. 6, 2015, President Obama canceled the Keystone XL pipeline. Canada PM Trudeau, just installed and wanting not to offend, politely said he was “disappointed.” Here is the back story that you won’t hear in the media.

Americans should know all about tar pits. As the traditional folk tale suggests, there have been many tar pools across the US. A famous one is in Los Angeles: La Brea Tar Pit. Pictured above around 1910, it’s an oil spill produced by Nature.  Notice the many oil derricks nearby.

Tar pits are composed of heavy oil fractions called gilsonite, which seeped from the Earth as oil. In Hancock Park, crude oil seeps up along the 6th Street Fault from the Salt Lake Oil Field, which underlies much of the Fairfax District north of the park.[3] The oil reaches the surface and forms pools at several locations in the park, becoming asphalt as the lighter fractions of the petroleum biodegrade or evaporate.

This seepage has been happening for tens of thousands of years. From time to time, the asphalt would form a deposit thick enough to trap animals, and the surface would be covered with layers of water, dust, or leaves. Animals would wander in, become trapped, and eventually die. Predators would enter to eat the trapped animals and also become stuck. 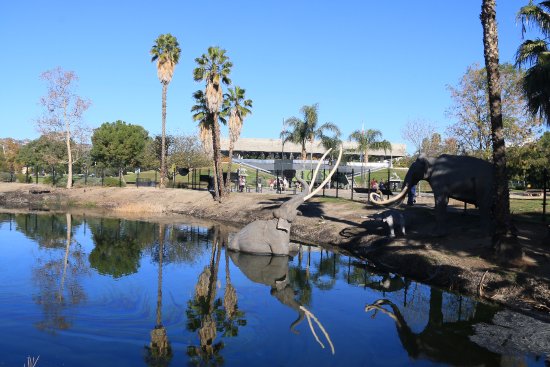 So, as you can see, tar pits are hazardous to animal and plant life. In Canada, we have a much greater problem bestowed on us: the Athabasca tar sands in Alberta. The oil deposits are much too large to put fences around it and open it as a museum, as was done in L.A. No, in Alberta the environmentally responsible thing is to clean up the mess Nature left behind.

The cleanup requires a massive effort, but costs can be offset by processing the tar into petroleum products and shipping them to markets who want to use them.  Using those products from syncrude oil liberates CO2 once trapped in bitumen, and in the air becomes available to plants who grow larger and faster from the increased concentration.  The Japanese would call this a “virtuous cycle.”

Br’er America is a neighbor with the facilities to help, but because of CO2 hysteria, the Obama administration is afraid of getting some tar on their hands. Actually a pipeline is the environmentally friendly way of transporting the crude oil, but now trains will be used instead of the pipeline.

The origin of the Alberta oil sands is a debated subject. Two primary theories are asserted:

1.) These sands are the remnants of a once vast reserve of crude oil that, over extremely long periods of time, has escaped or been destroyed microbiologically; thus leaving behind some bitumen and also converting the lighter crude oil into bitumen through bacterial processes.

2.) The bitumen evolved from highly organic cretaceous shales (similar to oil shale). Underground pressure forced the bitumen out of the kerogen rich shales where it soaked into existing silt grade sediments and sand bodies.

In the first theory, petroleum would be formed in the traditional manner, and then converted to bitumen by some additional process.  More description here.

So whether Nature created the tar mess by bacteria or by underground pressure, it’s up to us humans to clean it up. Canada is doing the heavy lifting, while the Obama administration prefers posing as an innocent bystander.