Kinder Morgan’s Trans Mountain expansion has become a lightning rod for climate protests from coast to coast, with opponents from among Trudeau’s own caucus of Liberal MPs and his political ally, Vancouver Mayor Gregor Robertson.

The fight overshadowed quieter deliberations about Enbridge’s proposed replacement of Line 3, a half-century-old pipeline from Alberta to the United States that Trudeau approved Tuesday, effectively doubling its current working capacity.

Between the Trans Mountain and Line 3 expansions, the Liberals have approved the export of almost a million additional barrels of oil per day — and the production of between 23 and 28 million tonnes of additional greenhouse gases annually. Line 3 can actually handle another 155 million barrels per day, but Enbridge would have to apply for a new permit. 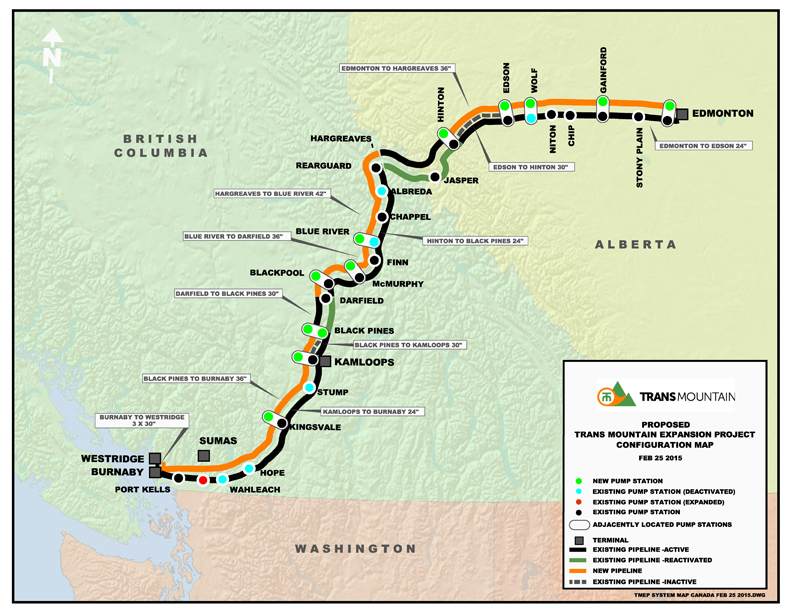 The Trans Mountain Expansion Project (TMX) is a proposal to expand the existing Trans Mountain pipeline system between Edmonton, AB and Burnaby, BC. It would include approximately 987 km of new pipeline, new and modified facilities, such as pump stations and tanks, and the reactivation of 193 km of existing pipeline.

The Westridge Marine Terminal would also be expanded. New pipeline segments would be added between Edmonton and Hinton, AB, Hargreaves, BC and Darfield, BC and Black Pines, BC and Burnaby, BC.

Some existing, but currently deactivated pipeline segments between Hinton, AB and Hargreaves, BC and Darfield and Black Pines, BC would be reactivated.

Line 3 would replace a decades-old conduit that runs from Hardisty, Alta., to Superior, Wisc., and double its capacity. (BNN Graphics)

From BNN news (here):
The Line 3 crude oil pipeline replacement project proposed by Calgary-based Enbridge Inc. has attracted little attention despite its potential to increase Canadian exports to the United States. Here are some facts about the plan:
— The $7.5-billion, 1,660-kilometre pipeline replacement project would be the most expensive in Enbridge history.
— The line is almost half a century old and its regulated maximum throughput has been reduced through pressure restrictions to about 390,000 barrels of oil per day.
— The replacement of the aging 34-inch diameter pipe with new 36-inch pipe will restore the original regulated capacity of 760,000 barrels per day, nearly doubling oil shipping potential.
— In April, the National Energy Board recommended approval of the Canadian part of the project with 89 conditions.
— Line 3 already has a U.S. presidential permit, unlike the higher-profile Keystone XL pipeline project which was rejected by the Obama administration a year ago. Line 3 still requires state regulator approvals.
— On the Canadian side of the border, Enbridge intends to spend $4.9 billion to replace Line 3 between Hardisty, Alta., and the Canada-U.S. border at Gretna, Man.
— On the U.S. side, it will spend US$2.6-billion to replace pipe between Neche, N.D., and its terminal in Superior, Wis., from which crude can be transported to refinery markets in Chicago, the U.S. Gulf Coast and the eastern U.S. and Canada.
— Decommissioning of the existing Line 3 pipe will begin after the replacement pipeline is in service. Product will be removed and the line will be cleaned but the pipe itself is to be left in the ground. 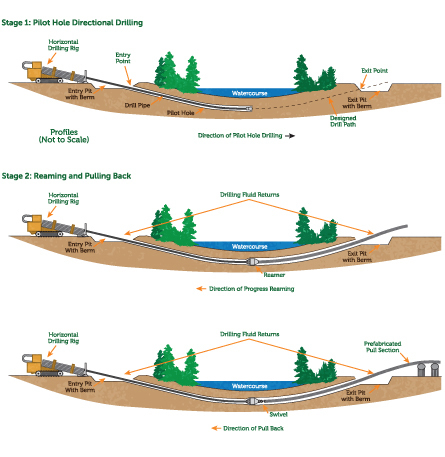 Going under: New trenchless technology means pipelines are installed without construction activity in the watercourse.

In both Canada and the United States, the oil pipeline industry has a remarkably good record of avoiding spills. Of the total volume of oil moved annually on federally regulated pipelines in Canada in 2015, 99.999% of the oil was delivered safely with no spills. Of the 1.4 billion barrels of oil transported, less than 400 were spilled. In the United States, the same 99.999% record of safe delivery applies. The number of accidents and incidents on crude oil pipelines has been declining for many years. Similarly, in Alberta, where most of the intra-provincial oil pipeline capacity is located, the number of pipeline incidents and spills has been stable or declining for at least 20 years.

Of course, it is not possible to entirely eliminate the risk of a spill, any more than it is possible in every other aspect of life to reduce risks to zero. This paper describes the consequences of a major spill near Marshall, Michigan in 2010. In one of the worst cases in twenty years, there were no injuries to people. The use of surface waters affected by the spill for drinking, irrigation and watering of livestock was interrupted for one month. 52 birds, 40 muskrats, 106 turtles and snakes and 42 fish died. The company responsible was required to pay almost $900 million in fines and other expenses to ensure that this does not happen again. From Friends of Science (here) 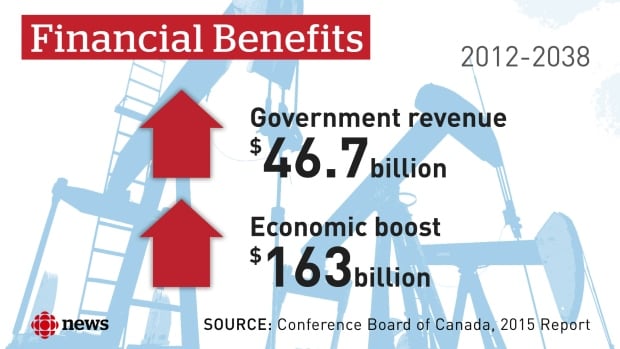 The financial benefits to governments and the economy of the Trans Mountain expansion include the development and planning of the project and the anticipated first 20 years of operation from 2018-38. The figures also include calculations such as the construction and operations of the pipeline, economic benefits of increased tanker activity, and oil company reinvestment.

The vast majority of oil from Alberta and Saskatchewan is exported to the United States, instead of being transported to a coast and exported to other countries at world prices.

“We produce a very valuable resource and we don’t get full value for that resource,” he said. “It’s absolutely unconscionable that we don’t take the actions we need to move it so that Canadians receive the full value for the product.” – David Dodge former Bank of Canada Governor

‘We may like to think we can survive off making solar panels and medical devices, but we can’t.’- John Manley, Business Council of Canada

Millions of people depend upon the supply of refined oil products for transportation, industrial production, petrochemicals and the thousands of products and services that people use in our modern industrialized society. Further, hundreds of thousands of people work very hard to ensure that the transportation of crude oil and refined oil products moves across our lands with the utmost care given to oil spill prevention, preparedness and response. Comprehensive liability, compensation and governance regimes are in place to make sure that companies have a strong financial incentive to avoid spills and to clean them up as soon as possible if they do occur. Decisions about the permitting or construction of pipelines should be based on facts, not fear. 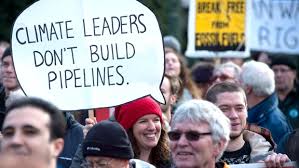 None of these facts matter to unhinged people who fear fossil fuels must be left in the ground. And US funders are largely responsible for their activity. From National Post: The cash pipeline opposing Canadian oil pipelines

In 2015, Tides paid $4 million to 50 anti-pipeline groups. Of that, $750,000 went to U.S. organizations while $3.3 million was paid out in Canada. A total of $615,000 went to the four environmental groups involved in the development of the Notley government’s climate plan: STAND, formerly Forest Ethics; The Pembina Institute; Environmental Defence; and Equiterre. The largest single grant from Tides to a Canadian environmental organization was US$700,000 paid to The Sisu Institute, a low-profile non-profit based in Sointula, B.C. That was for an initiative called “Canada’s Road To Paris: Changing The Narrative.”

If the activists marching in protests and storming NEB hearings make the anti-pipeline campaign look like an amateur, grassroots movement, the reality is it’s anything but. Anti-pipeline activists say they’re protesting pipelines to “keep oil in the ground.” And yet, against Texas, where oil production has doubled, there’s no multi-million-dollar campaign.