The Permafrost Bogeyman is Back!

The Climate Scare of this Week is apparently melting permafrost.The Met Office warning on April 10:

The researchers, from Sweden and Norway as well as the UK, suggest that the huge permafrost losses could be averted if ambitious global climate targets are met.

Lead-author Dr Sarah Chadburn of the University of Leeds said: “A lower stabilisation target of 1.5ºC would save approximately two million square kilometres of permafrost.

“Achieving the ambitious Paris Agreement climate targets could limit permafrost loss. For the first time we have calculated how much could be saved.”

The permafrost bogeyman has been reported before, been debunked, but will likely return again like a zombie that never dies. I have likened the climate false alarm system to a Climate Whack-A-Mole game because the scary notions keep popping up no matter how often you beat them down with reason and facts. So once again into the breach, this time on the subject of Permafrost.

I Travelled to the Arctic to Plunge a Probe Into the Melting Permafrost is a Motherboard article that aims to alarm but also provides some useful information.

The ground above the permafrost that freezes and thaws on an annual cycle is called the active layer. The uppermost segment is organic soil, because it contains all the roots and decomposing vegetation from the surface. Beneath the organic layer is the moist, clay-like mineral soil, which sits directly on top of the permafrost. The types of vegetation will influence the contents of the soil—but in return, the soil determines what can grow there.

Kholodov inserted probes into the layers of soil and the permafrost to measure its temperature, moisture content, and thermal conductivity. The air-filled organic layer is a much better insulator than the waterlogged mineral soil. So an ecosystem with a thicker organic layer, where there’s more vegetation, should provide better protection for the permafrost below.

On a warm morning in the boreal forests around Fairbanks, Loranty squeezed between two black spruce trees and motioned to all the woody debris scattered on the ground. “Here, where we have more trees and denser forests, we have shallower permafrost thaw depths.”

He grabbed a T-shaped depth probe and shoved it into the ground. It only sank about a handspan before it struck permafrost. “When you have trees, they provide shade,” he said, “and that prevents the ground from getting too warm in the summer.” So here, the permafrost is shallow, right beneath the surface.

Other vegetation, like moss, can also protect permafrost. “It’s fluffy, with lots of airspace, like a down coat,” Loranty explained, “and heat can’t move through it well, so it’s a good insulator.”

But 800km north on the tundra, close to the Arctic Ocean, there are no trees. It’s a less productive ecosystem than the forest and provides little insulation to the frozen ground. Here, low-lying shrubs, grasses, and lichens dominate underfoot. When I grabbed the depth probe and pushed it in, it sunk down a meter before it bottomed out because the permafrost was much deeper.

To really understand permafrost, it helps to listen to people dealing with Arctic infrastructure like roads. A thorough discussion and analysis is presented in Impacts of permafrost degradation on a road embankment at Umiujaq in Nunavik (Quebec), Canada By Richard Fortier, Anne-Marie LeBlanc, and Wenbing Yu

Fig. 1. Permafrost distribution and marine transgression in Nunavik (modified after Allard and Seguin 1987). Location of the 14 Inuit communities in Nunavik.

Following the retreat of the Wisconsin Ice Sheet about 7600–7300 years B.P. on the east coast of Hudson Bay (Hillaire–Marcel 1976; Allard and Seguin 1985) and about 7500– 7000 years B.P. in Ungava (Gray et al. 1980; Allard et al. 1989), the sea flooded a large band of coastline in Nunavik (Fig. 1). Glaciomarine sediments were then deposited in deep water in the Tyrrell and D’Iberville Seas (Fig. 1). Due to the isostatic rebound, once exposed to the cold atmosphere, the raised marine deposits were subsequently eroded and colonized by vegetation, and permafrost aggraded from sporadic permafrost to continuous permafrost with increasing latitude (Fig. 1).

A case study is presented herein on recent thaw subsidence observed along the access road to the Umiujaq Airport in Nunavik (Quebec). In addition to the measurement of the subsidence, a geotechnical and geophysical investigation including a piezocone test, ground-penetrating radar (GPR) profiling, and electrical resistivity tomography (ERT) was carried out to characterize the underlying stratigraphy and permafrost conditions. In the absence of available ground temperature data for assessing the causes of permafrost degradation, numerical modeling of the thermal regime of the road embankment and subgrade was also undertaken to simulate the impacts of (i) an increase in air temperature observed recently in Nunavik and (ii) the thermal insulation effect of snow accumulating on the embankment shoulders and toes. The causes and effects of permafrost degradation on the road embankment are also discussed. 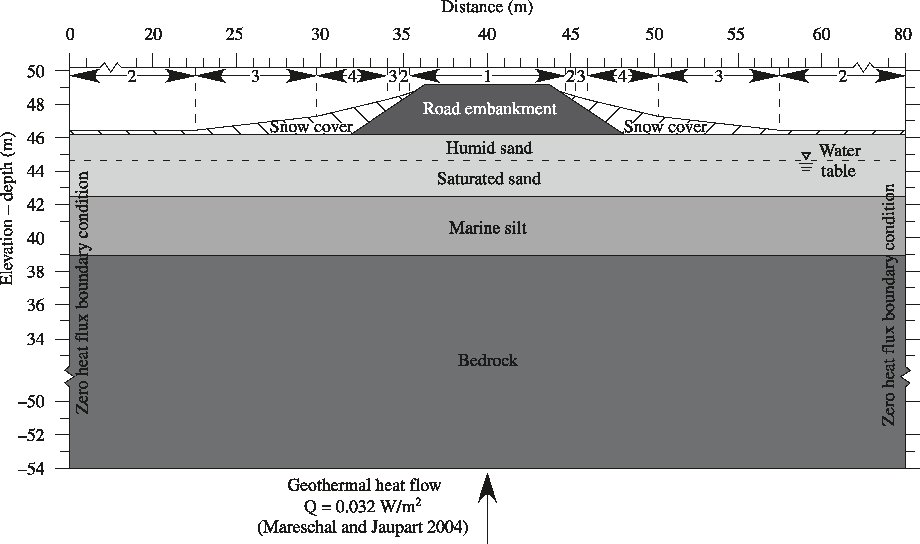 Fig. 13. Cross section of the road embankment and subgrade showing the stratigraphy and boundary conditions used for the numerical modeling. The numbers between arrows refer to the ground surface boundaries (Table 1)

Only the governing equation of heat transfer by conduction taking into account the phase change problem was considered to simulate the permafrost warming and thawing underneath the road embankment. However, complex processes of heat transfer, groundwater flow, and thaw consolidation can take place in degrading permafrost. The development of a two dimensional numerical model of these coupled processes is needed to accurately predict the thaw subsidence based on the thaw consolidation properties of permafrost and to compare this prediction with the performance of the access road to Umiujaq Airport.

The subsidence is due to thaw consolidation taking place in a layer of ice-rich silt underneath a superficial sand layer. While the seasonal freeze–thaw cycles were initially restricted to the sand layer, the thawing front has now reached the thaw-unstable ice-rich silt layer. According to our numerical modeling, the increase in air temperature recently observed in Nunavik cannot be the sole cause of the observed subsidence affecting this engineering structure. The thick embankment also acts as a snow fence favoring the accumulation of snow on the embankment shoulders. The permafrost degradation is also due to the thermal insulation of the snow cover reducing heat loss in the embankment shoulders and toes.

The Russians are seasoned permafrost scientists with Siberia as their preserve, and their observations are balanced by their long experience. The latest Russia report is from 2010.

We conclude the following based on initial analysis and interpretation of the data obtained in this project:

An article in Scientific American raises several concerns about permafrost, but does add some realism:

First, while most of the methane is believed to be buried roughly 200 meters below the sea bed, only the top 25 meters or so of sea-bed are currently thawed, and thawing seems to have only progressed by about one meter in the last 25 years – a pace that suggests that the large bulk of the buried methane will stay in place for centuries to come.

Second, several thousand years ago, when orbital mechanics maximized Arctic warmth, the area around the North Pole is believed to have been roughly 4 degrees Celsius warmer than it is today and covered in less sea ice than today. Yet there’s no evidence of a massive amount of methane release in this time.

Third, the last time methane was released in vast quantities into the atmosphere – during the Paleocene-Eocene Thermal Maximum 56 million years ago – the process didn’t happen overnight. It took thousands of years.

Put those facts together, and we are probably not in danger of a methane time bomb going off any time soon.

The active layer of permafrost does vary from time to time and place to place. There was warming and some permafrost melting end of last century, but lately not so much. Any specific permafrost layer is influenced by many factors, including air temperatures, snow cover and vegetation, as well as the structure of the land, combining fill, sand, silt, ice and salinity mixtures on top of bedrock.

Rather than a permafrost bogeyman, we need a more people-friendly mascot. Consider our traditional nature friends loved by children and adults.

For example, Smokey the Bear

And the ever-popular Cola Bear

Permafrosty is here!  Love him tender, and he’ll never let you down.

Additional Background on Permafrost in an earlier post The Permafrost Bogeyman