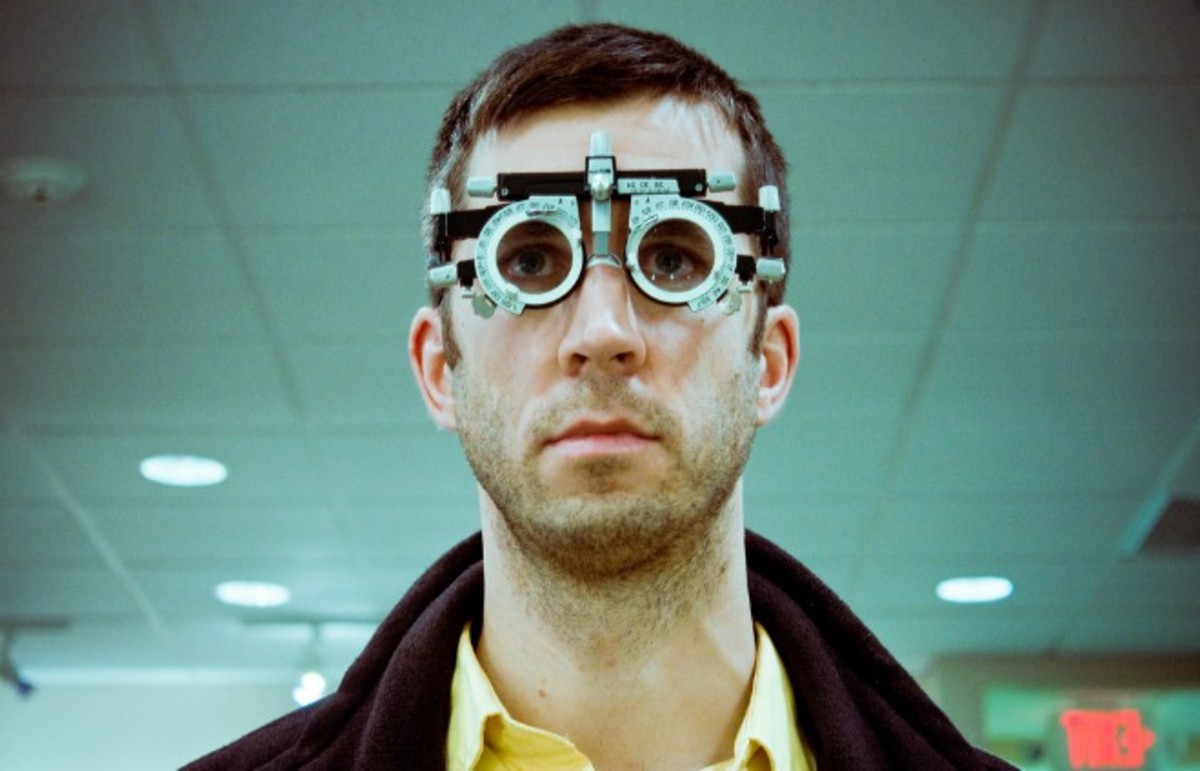 We are entering the season where governments, especially the US are reviewing and finalizing Climate Assessments.  Whenever citizens or decision makers are presented with an assessment and recommendations, it is important to take the stance of a “reasonable person.”  That means one applies critical intelligence by asking if assertions are well-founded and logical.

In starting to read the draft Climate Assessment reports, it strikes me that the difference between alarmists and others is not so much in the data or facts, but in the perspective through which one sees and interprets the information.  From experience the last few years, I suggest that readers of these reports need to be alert for two errors that crop up often.  The general impairments are stated below followed by some examples for illustration.

Correcting for Myopia and/or Lop-sidedness

It was recently suggested to me that we should all be concerned about the Greenland ice sheet melting resulting in dangerous rising sea levels.  The evidence presented came from US climate.gov in the form of this chart. 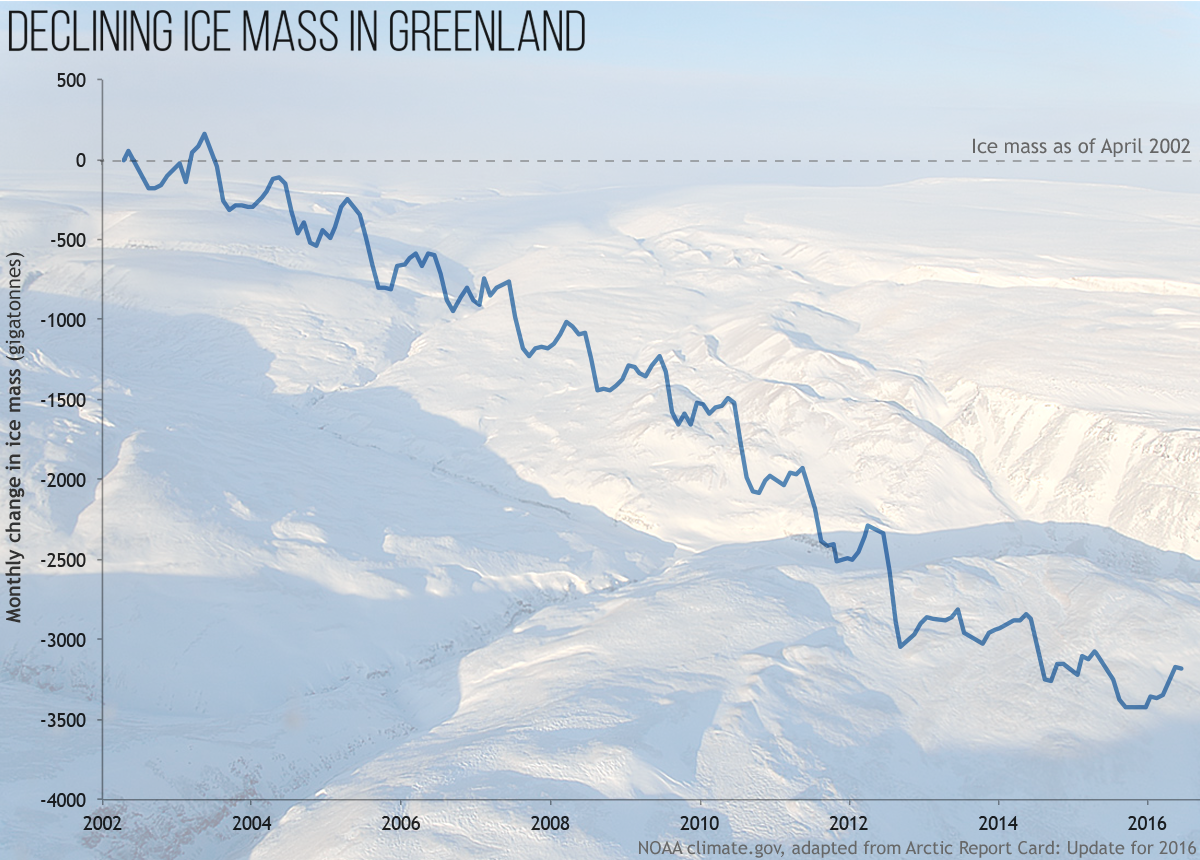 On the NOAA page where it appears, they explain:

The ups and downs in the graph track the accumulation of snow in the cold season and the melting of the ice sheet in the warm season. The Arctic Report Card: Update for 2016 reported that between April 2015 and April 2016, Greenland lost approximately 191 gigatonnes of ice, roughly the same amount that was lost between April 2014 and April 2015. Though the April 2015–April 2016 mass loss was lower than the average April-to-April decline over the entire observation period, it continued the long-term melt trend: approximately 269 gigatonnes per year from 2002 to 2016.

Now that NOAA graph needs to be understood in context.  That means looking at the data in the largest relevant scope (test for myopia) and checking that conclusions are in proportion (not lop-sided) compared to the base reality.

First, it turns out that the years since 2002 are not representative.  From DMI (Danish Meteorological Institute Aerial photos from Greenland topple climate models

This loss started again in 2004 and has continued until today.

“We can see that the dynamic ice-mass loss is not accelerating constantly, as we had believed,” says Shfaqat Abbas Khan, a senior researcher at DTU Space – the National Space Institute.

“It is only periodically that the ice disappears as rapidly as is happening today. We expect that the reduction in Greenland’s ice mass due to the dynamic ice-mass loss will ease over the next couple of years and will reach zero again.”

But the call for concern is also lop-sided in the context of the actual massiveness of Greenland’s ice sheet which has persisted for millennia. (That’s why they go there for ice cores.)

Annual snowfall: From the Lost Squadron, we know at that particular spot, the ice increase since 1942 – 1990 was 1.5 m/year ( Planes were found 75 m below surface)
Assume that yearly precipitation is 100 mm / year over the entire surface.
That is 168000 Gton. Yes, Greenland is Big!

So if that 200 Gton rate continued, an assumption not warranted by observations above, that ice loss would result in a 1% loss of Greenland ice in 800 years.

Seen in the proper perspective, there is no reason for panic.

I have been referred to studies in places like Arizona finding that certain species are moving to higher altitudes because of warming to their native habitat.  The research seems solid and I do not doubt either that climate zones shift over time or that plant and animal life adapt.  But how serious is the problem?  The US Southwest has warmed in recent decades, while the US Southeast has cooled.  What is the global story on changing climate zones?

Fortunately we have a well-established framework classifying climate zones based upon temperature and precipitation patterns.  And researchers have addressed this question in this paper: Using the Köppen classiﬁcation to quantify climate variation and change: An example for 1901–2010  By Deliang Chen and Hans Weiteng Chen Department of Earth Sciences, University of Gothenburg, Sweden

Hans Chen has built an excellent interactive website (here): The purpose of this website is to share information about the Köppen climate classification, and provide data and high-resolution figures from the paper Chen and Chen, 2013: Using the Köppen classification to quantify climate variation and change: An example for 1901–2010 (pdf). A synopsis is at my post Data vs. Models #4: Climates Changing.

Briefly, for this discussion, Chen and Chen presented tables and charts showing that most places have had at least one entire year with temperatures and/or precipitation atypical for that climate. It is much more unusual for abnormal weather to persist for ten years running. At 30-years and more the zones are quite stable, such that is there is little movement at the boundaries with neighboring zones.  Over time, there is variety in zonal changes, albeit within a small range of overall variation.

A tv show in Australia illustrated how vision is impaired on this subject.  A typical graph was used to claim warming is alarming.  It came from the NASA Goddard Institute of Space Studies (GISS):

The graph shows no pause whatsoever.  This is accomplished by lowering the 1998 El Nino spike relative to 2015 El Nino. To see what is going on, here is a helpful chart from Dr. Ole Humlum at Climate4you.

It shows that indeed, GISS is showing 1998 peak lower than several years since, especially 2002, 2010 and 2016. In contrast, the satellite record is dominated by 1998, and may still be in that position once La Nina takes hold. The differences arise because satellites measure air temperature in the lower troposphere, while GISS combines records from land stations with sea surface temperatures (SSTs) to fabricate a global average anomaly, including adjusting, gridding and infilling to make the estimate of Global Mean Temperatures and compare to a 30-year average.

An insight into the adjustments is displayed below.  Dr. Humlum demonstrates that GISS is an unstable temperature record.

Based on the above it is not possible to conclude which of the above five databases represents the best estimate on global temperature variations. The answer to this question remains elusive. All five databases are the result of much painstaking work, and they all represent admirable attempts towards establishing an estimate of recent global temperature changes. At the same time it should however be noted, that a temperature record which keeps on changing the past hardly can qualify as being correct. (my bold)

All of these charts also suffer from lop-sidedness.  Considering the range of temperatures experienced by most Americans in a typical year, the following graph is more representative.

Why did GISS ignore the platinum standard satellite temperature dataset?  Why should the current graph be believed when it differs from previous ones, and maybe the next one?  Was not the 1C warming since 1850 a boon for civilization and the biosphere?  Should we wish for it to get cooler and start the slide into the next ice age?

There are a great many claims assembled in these Climate Assessments, all of them in support of policies like the Paris accord.  Reasonable people need to test for myopia and maintain a sense of proportion in order not to be taken in.