The alarmist media are promoting a new scare this week: “OMG, the warmer it gets, the fewer clouds blocking the sunshine, still warmer it gets, ad infinitum.” That is the narrative beneath headlines like these from the usual suspects (in alphabetical order for Monday, Feb. 25, 2019)

Low-level clouds that cover the oceans could disappear as a result of rising CO2 Daily Mail18:17 Mon,

Carbon dioxide ‘could destroy clouds’ and turn our planet into a ‘Hothouse Earth’ Yahoo! UK & Ireland07:15

The loss of clouds could add another 8°C to global warming MIT Technology Review07:43

We Could Be On The Verge Of Killing Off Clouds And Returning To A ‘Hothouse Earth’ Forbes16:24 Mon, 25 Feb

Isn’t it impressive how Climate Crisis Central can blanket the world with a scary message, with enough variety in titles to disguise the robotic repetition? Yet just reading the headlines already suggests to anyone with critical intelligence what is false about this alarm. Let me list some of the obvious flaws before digging into this issue.

1. It’s a projection from a climate model, not a finding from observations.

2. It is based on highly uncertain supposed mechanisms.

4. The possible effect will occur after almost all readers will be dead of natural causes.

5. It claims a runaway warming “tipping point” which the earth has suppressed until now.

6. It contradicts the logic of a warmer world increasing the hydrology cycle with more clouds and precipitation.

7. It stokes fear of “hothouse earth” when presently we are slowly emerging from “severe icehouse earth.”

The above image comes from esteemed paleoclimatologist Christopher Scotese.  It shows the range of earth’s climate history, and that we are presently slowly emerging from Severe Icehouse.  It also shows that the world warms by rising temperatures at higher latitudes toward the poles, while the equator remains the same, thus reducing the gradient.  Tossing around the word “Hothouse” is nonsensical in today’s situation. See also: Fact: Future Will be Flatter Not Hotter

As it happens, the first article in the list is the most informative: A World Without Clouds Excerpts in italics with my bolds

A state-of-the-art supercomputer simulation indicates that a feedback loop between global warming and cloud loss can push Earth’s climate past a disastrous tipping point in as little as a century.

Clouds currently cover about two-thirds of the planet at any moment. But computer simulations of clouds have begun to suggest that as the Earth warms, clouds become scarcer. With fewer white surfaces reflecting sunlight back to space, the Earth gets even warmer, leading to more cloud loss. This feedback loop causes warming to spiral out of control.

Climate physicists at the California Institute of Technology performed a state-of-the-art simulation of stratocumulus clouds, the low-lying, blankety kind that have by far the largest cooling effect on the planet. The simulation revealed a tipping point: a level of warming at which stratocumulus clouds break up altogether. The disappearance occurs when the concentration of CO2 in the simulated atmosphere reaches 1,200 parts per million — a level that fossil fuel burning could push us past in about a century, under “business-as-usual” emissions scenarios. In the simulation, when the tipping point is breached, Earth’s temperature soars 8 degrees Celsius, in addition to the 4 degrees of warming or more caused by the CO2 directly.

The huge range in the models’ predictions chiefly comes down to whether they see clouds blocking more or less sunlight in the future. As Marvel put it, “You can fairly confidently say that the model spread in climate sensitivity is basically just a model spread in what clouds are going to do.”

The problem is that, in computer simulations of the global climate, today’s supercomputers cannot resolve grid cells that are smaller than about 100 kilometers by 100 kilometers in area. But clouds are often no more than a few kilometers across. Physicists therefore have to simplify or “parameterize” clouds in their global models, assigning an overall level of cloudiness to each grid cell based on other properties, like temperature and humidity.

But clouds involve the interplay of so many mechanisms that it’s not obvious how best to parameterize them. The warming of the Earth and sky strengthens some mechanisms involved in cloud formation, while also fueling other forces that break clouds up. Global climate models that predict 2 degrees of warming in response to doubling CO2 generally also see little or no change in cloudiness. Models that project a rise of 4 or more degrees forecast fewer clouds in the coming decades.

But vastly more important and more challenging than high clouds are the low, thick, turbulent ones — especially the stratocumulus variety. Bright-white sheets of stratocumulus cover a quarter of the ocean, reflecting 30 to 70 percent of the sunlight that would otherwise be absorbed by the dark waves below. 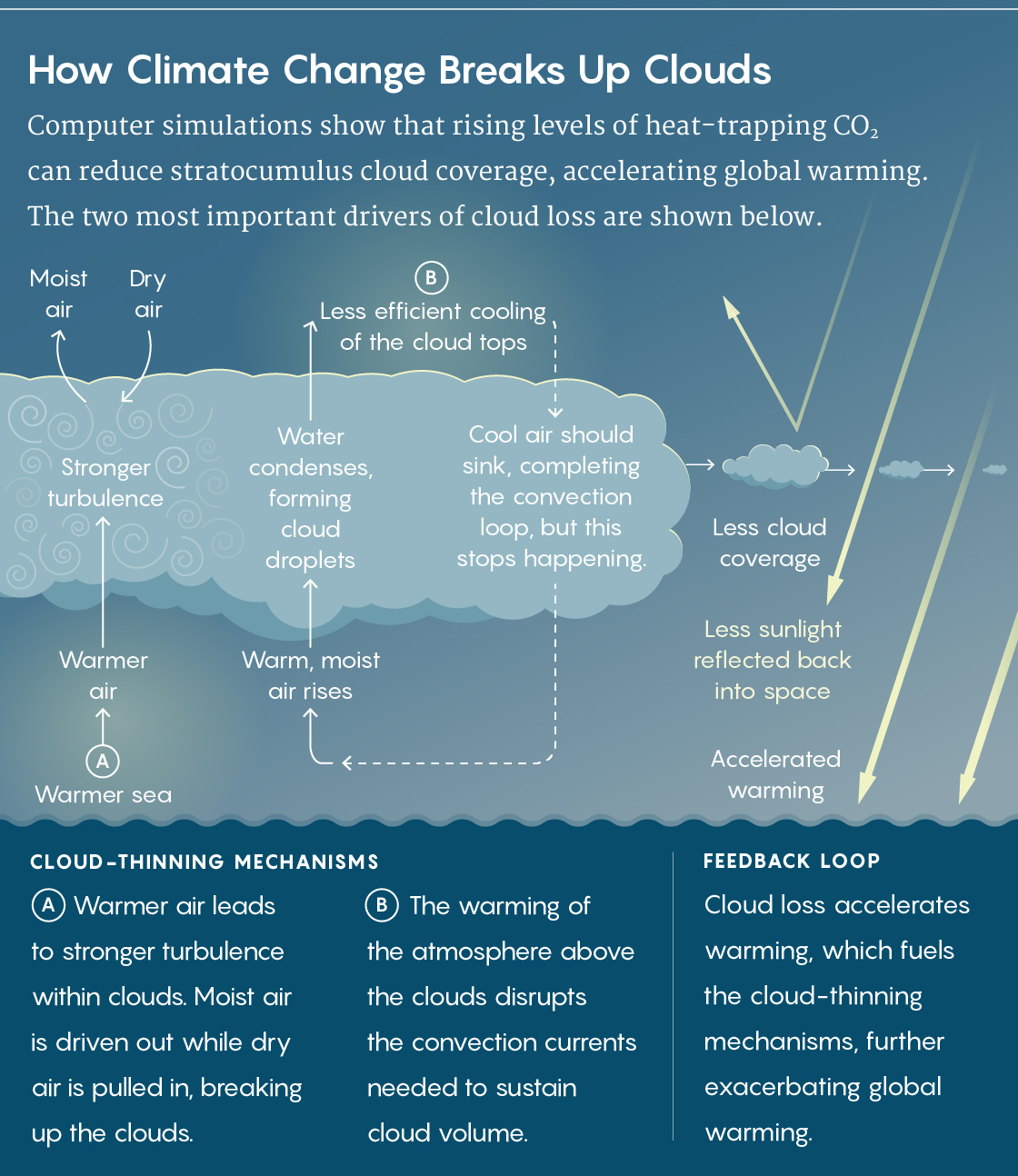 Suppositions:  First, when higher CO2 levels make Earth’s surface and sky hotter, the extra heat drives stronger turbulence inside the clouds. The turbulence mixes moist air near the top of the cloud, pushing it up and out through an important boundary layer that caps stratocumulus clouds, while drawing dry air in from above. Entrainment, as this is called, works to break up the cloud.

Secondly, as the greenhouse effect makes the upper atmosphere warmer and thus more humid, the cooling of the tops of stratocumulus clouds from above becomes less efficient. This cooling is essential, because it causes globs of cold, moist air at the top of the cloud to sink, making room for warm, moist air near Earth’s surface to rise into the cloud and become it. When cooling gets less effective, stratocumulus clouds grow thin.

On the Other Hand:

Joel Norris is one of the world experts in studying clouds in relation to climate, and he has published findings in partnerships with Martin Wild of ETH Zurich, where the global dimming and brightening database is located. See: Nature’s Sunscreen for background.

He notes these Uncertainties in Feedbacks

• general theories do not exist for quantifying most individual climate feedbacks

From analyzing the data, Norris concludes that Total Cloud Cover has been Net Cooling:

See also: No GHG Warming Fingerprints in the Sky