The image above, supported by the table later on shows that in June water has opened up as usual this time of year.  On the North American side, Bering and Okhotsk (bottom left) were already ice-free, so that Chukchi and Beaufort opened (bottom center).  Meanwhile, in Baffin Bay and Hudson Bay (bottom right) ice has retreated, and given the shallow depth of Hudson Bay it will go ice-free soon.

The picture is more mixed on the Euro-Russian side.  East Siberian (left) is nearly normal, with Laptev and Kara down (upper left) below the 12 year average.  Barents (upper center) has more ice than usual, and is still hanging onto Svalbard.

The graph below shows the surprising discrepancy between MASIE and SII  continued in June, but disappeared by month end. 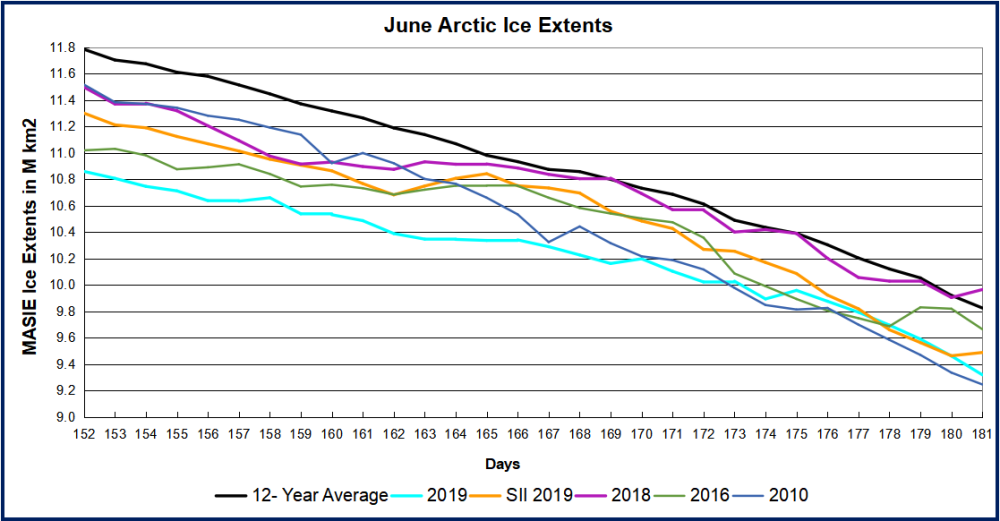 The table shows where the ice is distributed to make the 5.2% defict to average.  Beaufort Chukchi and Laptev Seas make up most of the NH deficit to average, while Kara and Baffin contribute the rest.