Recently in a discussion thread a warming proponent suggested we read this paper for conclusive evidence. The greenhouse effect and carbon dioxide by Wenyi Zhong and Joanna D. Haigh (2013) Imperial College, London. Indeed as advertised the paper staunchly presents IPCC climate science. Excerpts in italics with my bolds.

The Earth is bathed in radiation from the Sun, which warms the planet and provides all the energy driving the climate system. Some of the solar (shortwave) radiation is reflected back to space by clouds and bright surfaces but much reaches the ground, which warms and emits heat radiation. This infrared (longwave) radiation, however, does not directly escape to space but is largely absorbed by gases and clouds in the atmosphere, which itself warms and emits heat radiation, both out to space and back to the surface. This enhances the solar warming of the Earth producing what has become known as the ‘greenhouse effect’. Global radiative equilibrium is established by the adjustment of atmospheric temperatures such that the flux of heat radiation leaving the planet equals the absorbed solar flux.

The schematic in Figure 1, which is based on available observational data, illustrates the magnitude of these radiation streams. At the Earth’s distance from the Sun the flux of radiant energy is about 1365Wm−2 which, averaged over the globe, amounts to 1365/4 = 341W for each square metre. Of this about 30% is reflected back to space (by bright surfaces such as ice, desert and cloud) leaving 0.7 × 341 = 239Wm−2 available to the climate system. The atmosphere is fairly transparent to short wavelength solar radiation and only 78Wm−2 is absorbed by it, leaving about 161Wm−2 being transmitted to, and absorbed by, the surface. Because of the greenhouse gases and clouds the surface is also warmed by 333Wm−2 of back radiation from the atmosphere. Thus the heat radiation emitted by the surface, about 396Wm−2, is 157Wm−2 greater than the 239Wm−2 leaving the top of the atmosphere (equal to the solar radiation absorbed) – this is a measure of ‘greenhouse trapping’.

Why This Line of Thinking is Wrong and Misleading

Key Points:
Thus greenhouse-warming theory and the diagram above is based on these mistaken assumptions:

There are other serious problems:

(4) greenhouse gases absorb only a small part of the radiation emitted by Earth,
(5) they can only reradiate what they absorb,
(6) they do not reradiate in every direction as assumed,
(7) they make up only a tiny part of the gases in the atmosphere, and
(8) they have been shown by experiment not to cause significant warming.
(9) The thermal effects of radiation are not about amount of radiation absorbed, as currently assumed, they are about the temperature of the emitting body and the difference in temperature between the emitting and the absorbing bodies as described below.

Back to the Basics of Radiative Warming in Earth’s Atmosphere

What Physically Is Thermal Radiation?

Thermal radiation is a portion of this continuum of electromagnetic radiation radiated by a body of matter as a result of the body’s temperature—the hotter the body, shown here at the bottom as Temperature, the higher the radiated frequencies of oscillation with significant amplitudes of oscillation.

We observe that electromagnetic radiation has two physical properties: 1) frequency of oscillation, which is color in the visible part of the continuum, and 2) amplitude of oscillation, which we perceive as intensity or brightness at each frequency.  Planck’s law In 1900, Max Planck, one of the fathers of modern physics, derived an equation by trial and error that has become known as Planck’s empirical law. Planck’s empirical law is not based on theory, although several derivations have been proposed. It was formulated solely to calculate correctly the intensities at each frequency observed during extensive direct observations of Nature. Planck’s empirical law calculates the observed intensity or amplitude of oscillation at each frequency of oscillation for radiation emitted by a black body of matter at a specific temperature and at thermal equilibrium. A black body is simply a perfect absorber and emitter of all frequencies of radiation. 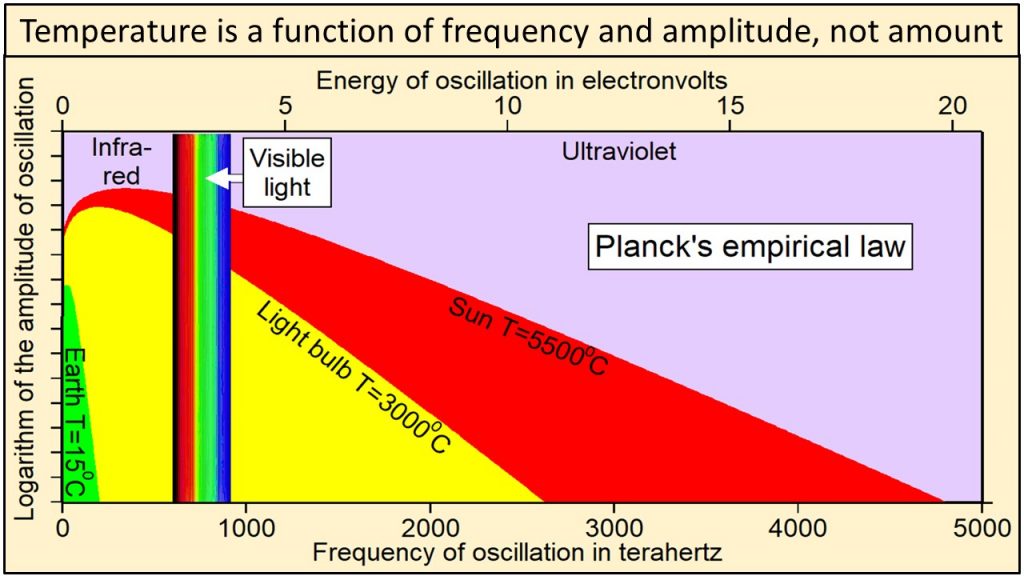 Radiation from Sun shown in red, yellow, and green clearly contains much higher frequencies and amplitudes of oscillation than radiation from Earth shown in green. Planck’s empirical law shows unequivocally that the physical properties of radiation are a function of the temperature of the body emitting the radiation.

Heat, defined in concept as that which must be absorbed by solid matter to increase its temperature, is similarly a broad continuum of frequencies of oscillation and corresponding amplitudes of oscillation.

Heat is, therefore, a broad continuum of frequencies and amplitudes of oscillation that cannot be described by a single number of watts per square meter as currently assumed in physics and in greenhouse-warming theory. The physical properties of heat as described by Planck’s empirical law and the thermal effects of this heat are determined both by the temperature of the emitting body and, as we will see below, by the difference in temperature between the emitting body and the absorbing body.

Figure 1.10 When ozone is depleted, a narrow sliver of solar ultraviolet-B radiation with wavelengths close to 0.31 µm (yellow triangle) reaches Earth. The red circle shows that the energy of this ultraviolet radiation is around 4 electron volts (eV) on the red scale on the right, 48 times the energy absorbed most strongly by carbon dioxide (blue circle, 0.083 eV at 14.9 micrometers (µm) wavelength. Shaded grey areas show the bandwidths of absorption by different greenhouse gases. Current computer models calculate radiative forcing by adding up the areas under the broadened spectral lines that make up these bandwidths. Net radiative energy, however, is proportional to frequency only (red line), not to amplitude, bandwidth, or amount.

Greenhouse gases absorb only certain limited bands of frequencies of radiation emitted by Earth as shown in this diagram. Water is, by far, the strongest absorber, especially at lower frequencies.

Climate models neglect the fact, shown by the red line in Figure 1.10 and explained in
Chapter 4, that due to its higher frequency, ultraviolet radiation (red circle) is
48 times more energy-rich, 48 times “hotter,” than infrared absorbed by
carbon dioxide (blue circle), which means that there is a great deal more energy packed
into that narrow sliver of ultraviolet (yellow triangle) than there is in the broad band
of infrared. This actually makes very good intuitive sense. From personal experience,
we all know that we get very hot and are easily sunburned when standing in ultraviolet
sunlight during the day, but that we have trouble keeping warm at night when standing
in infrared energy rising from Earth.

This post is about the radiative properties of CO2 severely limiting its potential to cause global warming.  A separate issue is the belief by warmists and some skeptics that humans are the primary cause of CO2 increases in the atmosphere.  I have looked at this and concluded that natural sources and sinks are more likely responsible, as explained in the post What Causes Rising Atmospheric CO2?