Excerpts in italics with my bolds.  A previous post is reprinted further on showing the evidence not discussed and hand-waved away by Fauci, whose NIH funded the Wuhan research facility from which the virus likely came.

Dr. Robert Redfield told CNN that this was his opinion on the origins of the virus.

“I’m of the point of view that I still think the most likely etiology of this pathogen in Wuhan was from a laboratory, you know, escaped,” Redfield told CNN’s Dr. Sanjay Gupta. “Other people don’t believe that, that’s fine. Science will eventually figure it out.”

Redfield said he didn’t believe the bat theory. “Normally, when a pathogen goes from a zoonosis to humans, it takes a while for it to figure out how to become more and more efficient in human-to-human transmission,” Redfield told CNN. “I just don’t think this makes biological sense.”

The former CDC chief wasn’t suggesting SARS-CoV-2 is an engineered virus — another theory with no supporting evidence — just a natural escapee. “In the lab, you think that that process of becoming more efficient was happening?” Gupta asked. [Note:  There is significant evidence of an engineered virus documented in the discussion below.]

“Yeah, let’s just say I have coronavirus that I’m working on. Most of us in the lab, we’re trying to grow a virus, we try to help make it grow better and better and better … so we can do experiments,” Redfield responded.

A virologist who fled China after studying the early outbreak of COVID-19 has published a new report claiming the coronavirus likely came from a lab.  This adds to the analysis done by Dr. Luc Montagnier earlier this year, and summarized in a previous post reprinted later on.  Dr. Yan was interviewed on Fox News, and YouTube has now blocked the video.

If you are wondering why Big Tech is censoring information unflattering to China, see Lee Smith’s Tablet article America’s China Class Launches a New War Against Trump  The corporate, tech, and media elites will not allow the president to come between them and Chinese money

Doctor Li-Meng Yan, a scientist who studied some of the available data on COVID-19 has published her claims on Zenodo, an open access digital platform. She wrote that she believed COVID-19 could have been “conveniently created” within a lab setting over a period of just six months, and “SARS-CoV-2 shows biological characteristics that are inconsistent with a naturally occurring, zoonotic virus”.

The paper by Yan, Li-Meng; Kang, Shu; Guan, Jie; Hu, Shanchang  is Unusual Features of the SARS-CoV-2 Genome Suggesting Sophisticated Laboratory Modification Rather Than Natural Evolution and Delineation of Its Probable Synthetic Route.  Excerpts in italics with my bolds.

The natural origin theory, although widely accepted, lacks substantial support. The alternative theory that the virus may have come from a research laboratory is, however, strictly censored on peer-reviewed scientific journals. Nonetheless, SARS-CoV-2 shows biological characteristics that are inconsistent with a naturally occurring, zoonotic virus. In this report, we describe the genomic, structural, medical, and literature evidence, which, when considered together, strongly contradicts the natural origin theory.

The evidence shows that SARS-CoV-2 should be a laboratory product created by using bat coronaviruses ZC45 and/or ZXC21 as a template and/or backbone.

Consistent with this notion, genomic, structural, and literature evidence also suggest a non-natural origin of SARS-CoV-2. In addition, abundant literature indicates that gain-of-function research has long advanced to the stage where viral genomes can be precisely engineered and manipulated to enable the creation of novel coronaviruses possessing unique properties. In this report, we present such evidence and the associated analyses.

Part 1 of the report describes the genomic and structural features of SARS-CoV-2, the presence of which could be consistent with the theory that the virus is a product of laboratory modification beyond what could be afforded by simple serial viral passage. Part 2 of the report describes a highly probable pathway for the laboratory creation of SARS-CoV-2, key steps of which are supported by evidence present in the viral genome. Importantly, part 2 should be viewed as a demonstration of how SARS-CoV-2 could be conveniently created in a laboratory in a short period of time using available materials and well-documented techniques. This report is produced by a team of experienced scientists using our combined expertise in virology, molecular biology, structural biology, computational biology, vaccine development, and medicine.

We present three lines of evidence to support our contention that laboratory manipulation is part of the history of SARS-CoV-2:

i. The genomic sequence of SARS-CoV-2 is suspiciously similar to that of a bat coronavirus discovered by military laboratories in the Third Military Medical University (Chongqing, China) and the Research Institute for Medicine of Nanjing Command (Nanjing, China).

ii. The receptor-binding motif (RBM) within the Spike protein of SARS-CoV-2, which determines the host specificity of the virus, resembles that of SARS-CoV from the 2003 epidemic in a suspicious manner. Genomic evidence suggests that the RBM has been genetically manipulated.

iii. SARS-CoV-2 contains a unique furin-cleavage site in its Spike protein, which is known to greatly enhance viral infectivity and cell tropism. Yet, this cleavage site is completely absent in this particular class of coronaviruses found in nature. In addition, rare codons associated with this additional sequence suggest the strong possibility that this furin-cleavage site is not the product of natural evolution and could have been inserted into the SARS-CoV-2 genome artificially by techniques other than simple serial passage or multi-strain recombination events inside co-infected tissue cultures or animals. 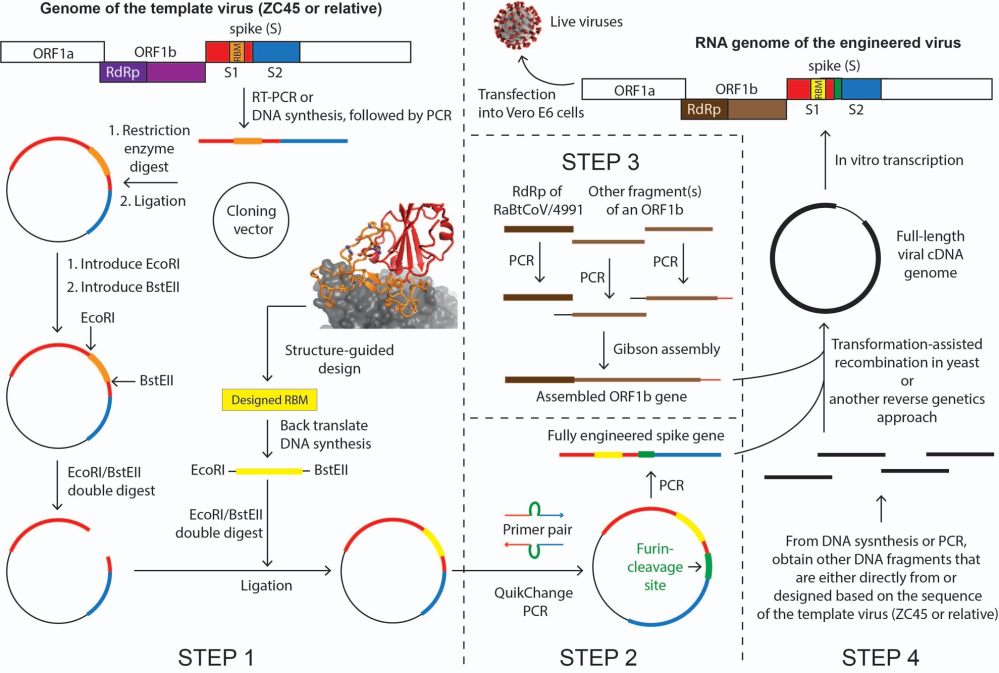 In past weeks there have been anecdotal reports from frontline doctors that patients who would have been flattened fighting off SARS CV2 in April are now sitting up and recovering in a few days. We have also the statistical evidence in the US and Sweden, as two examples, that case numbers are rising while Covid deaths continue declining. One explanation is that the new cases are younger people who have been released from lockdown (in US) with stronger immune systems. But it may also be that the virus itself is losing potency.

In the past I have noticed theories about the origin of the virus, and what makes it “novel.” But when the scientist who identified HIV weighs in, I pay particular attention. The Coronavirus Is Man Made According to Luc Montagnier the Man Who Discovered HIV. Excerpts in italics with my bolds.

Contrary to the narrative that is being pushed by the mainstream that the COVID 19 virus was the result of a natural mutation and that it was transmitted to humans from bats via pangolins, Dr Luc Montagnier the man who discovered the HIV virus back in 1983 disagrees and is saying that the virus was man made.

Professor Luc Montagnier, 2008 Nobel Prize winner for Medicine, claims that SARS-CoV-2 is a manipulated virus that was accidentally released from a laboratory in Wuhan, China. Chinese researchers are said to have used coronaviruses in their work to develop an AIDS vaccine. HIV RNA fragments are believed to have been found in the SARS-CoV-2 genome.

“With my colleague, bio-mathematician Jean-Claude Perez, we carefully analyzed the description of the genome of this RNA virus,” explains Luc Montagnier, interviewed by Dr Jean-François Lemoine for the daily podcast at Pourquoi Docteur, adding that others have already explored this avenue: Indian researchers have already tried to publish the results of the analyses that showed that this coronavirus genome contained sequences of another virus, … the HIV virus (AIDS virus), but they were forced to withdraw their findings as the pressure from the mainstream was too great.

To insert an HIV sequence into this genome requires molecular tools

In a challenging question Dr Jean-François Lemoine inferred that the coronavirus under investigation may have come from a patient who is otherwise infected with HIV. No, “says Luc Montagnier,” in order to insert an HIV sequence into this genome, molecular tools are needed, and that can only be done in a laboratory.

According to the 2008 Nobel Prize for Medicine, a plausible explanation would be an accident in the Wuhan laboratory. He also added that the purpose of this work was the search for an AIDS vaccine.

In any case, this thesis, defended by Professor Luc Montagnier, has a positive turn.

According to him, the altered elements of this virus are eliminated as it spreads: “Nature does not accept any molecular tinkering, it will eliminate these unnatural changes and even if nothing is done, things will get better, but unfortunately after many deaths.”

This is enough to feed some heated debates! So much so that Professor Montagnier’s statements could also place him in the category of “conspiracy theorists”: “Conspirators are the opposite camp, hiding the truth,” he replies, without wanting to accuse anyone, but hoping that the Chinese will admit to what he believes happened in their laboratory.

To entice a confession from the Chinese he used the example of Iran which after taking full responsibility for accidentally hitting a Ukrainian plane was able to earn the respect of the global community. Hopefully the Chinese will do the right thing he adds. “In any case, the truth always comes out, it is up to the Chinese government to take responsibility.”

Implications: Leaving aside the geopolitics, this theory also explains why the virus weakens when mutations lose the unnatural pieces added in the lab. Since this is an RNA (not DNA) sequence mutations are slower, but inevitable. If correct, this theory works against fears of a second wave of infections. It also gives an unintended benefit from past lockdowns and shutdowns, slowing the rate of infections while the virus degrades itself. 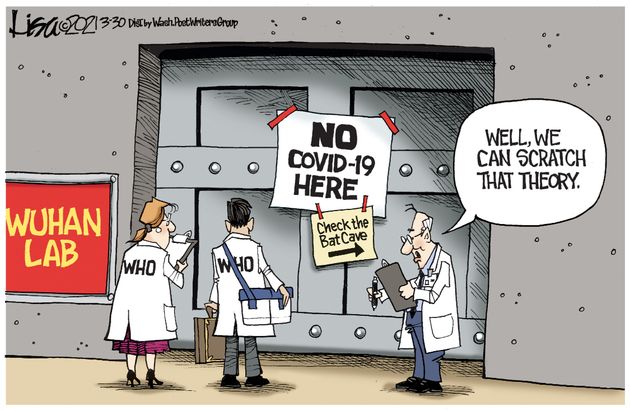