Below are a series of rebuttals of the 11 most common climate alarmists’ claims such as those made in the recently released Fourth National Climate Assessment Report.[2] The authors of these rebuttals are all recognized experts in the relevant fields.  H/T Joseph D’Aleo for compiling work by many experts at his website ACRESEARCH Fact Checking Climate Claims.  Excerpts in italics with my bolds.

For each alarmist claim, a summary of the relevant rebuttal is provided below along with a link to the full text of the rebuttal, which includes the names and the credentials of the authors of each rebuttal.

Claim: Heat Waves are increasing at an alarming rate and heat kills.
Fact:  They have been decreasing since the 1930s in the U.S. and globally.

There has been no detectable long-term increase in heat waves in the United States or elsewhere in the world. Most all-time record highs here in the U.S. happened many years ago, long before mankind was using much fossil fuel. Thirty-eight states set their all-time record highs before 1960 (23 in the 1930s!). Here in the United States, the number of 100F, 95F and 90F days per year has been steadily declining since the 1930s. The Environmental Protection Agency Heat Wave Index confirms the 1930s as the hottest decade.

Claim: Global warming is causing more hurricanes and stronger hurricanes.
Fact:  Hurricane activity is flat to down since 1900, landfalls in the US are declining

The long-term linear trend in the number and intensity of global hurricane activity has remained flat or down. Hurricane activity does vary year-to-year and over longer periods as short-term ocean cycles like El Nino/La Nina and multidecadal cycles in the Pacific (PDO) and Atlantic (AMO) ocean temperature regimes favor changes in activity levels and some basins over others.

Credible data show this is true despite much better open ocean detection than before the 1960s when many short-lived storms at sea would have been missed as there were no satellites, no aircraft reconnaissance, no radar, no buoys and no automated weather stations. 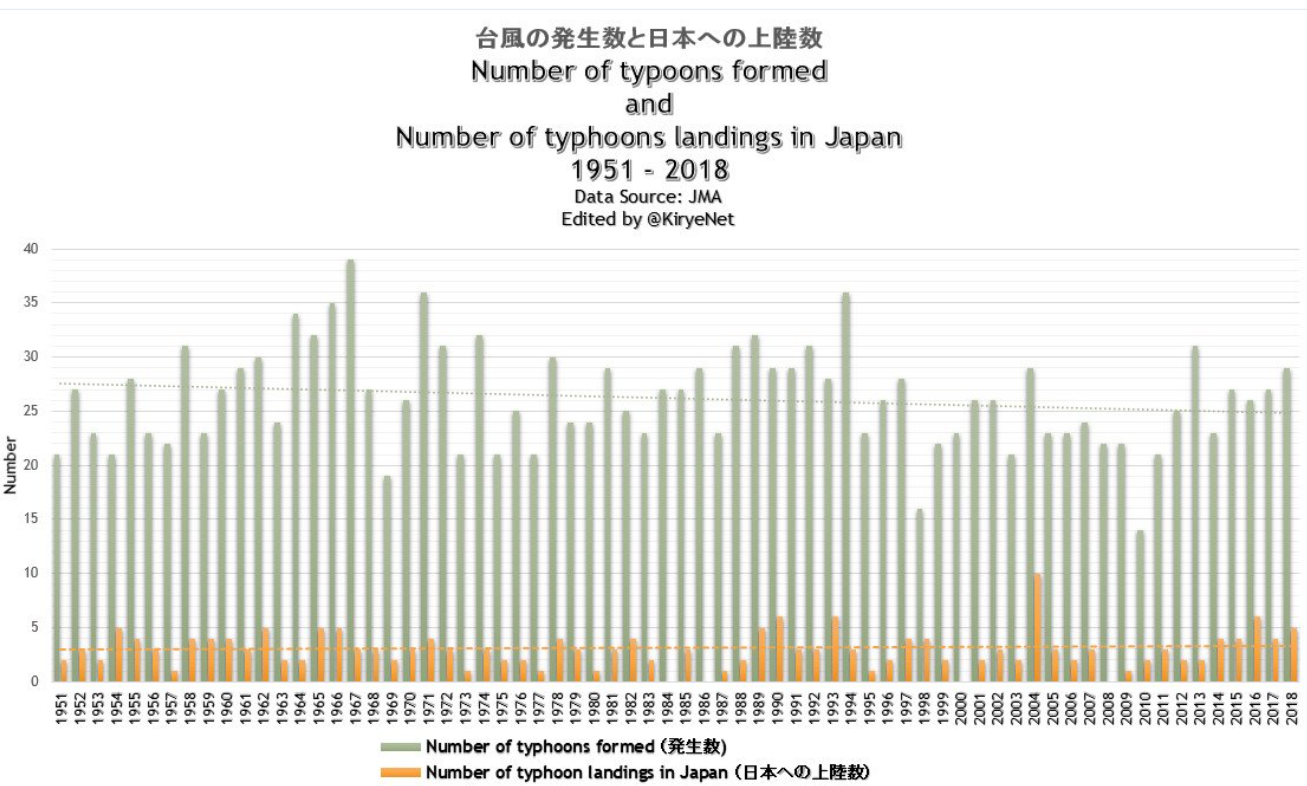 Claim: Global warming is causing more and stronger tornadoes.
Fact:  The number of strong tornadoes have declined over the last half century

Tornadoes are failing to follow “global warming” predictions. Strong tornadoes have seen a decline in frequency since the 1950s. The years 2012, 2013, 2014, 2015 and 2016 all saw below average to near record low tornado counts in the U.S. since records began in 1954. 2017 rebounded only to the long-term mean. 2018 ranked well below the 25thpercentile. Tornadoes increased this spring as extreme cold and late snow clashed with southeast warmth to produce a series of strong storms with heavy rains and severe weather including tornadoes. May ranked among the biggest months and the season rebounded after 7 quiet years above the 50th percentile.

Our use of fossil fuels to power our civilization is not causing droughts or floods. NOAA found there is no evidence that floods and droughts are increasing because of climate change.

The number, extend or severity of these events does increase dramatically for a brief period of years at some locations from time to time but then conditions return to more normal. This is simply the long-established constant variation of weather resulting from a confluence of natural factors.

Claim: Global Warming has increased U.S. Wildfires.
Fact: Wildfires have been decreasing since 1800s. The increase in damage in recent years is due to population growth in vulnerable areas and poor forest management.

Wildfires are in the news almost every late summer and fall. The National Interagency Fire Center has recorded the number of fires and acreage affected since 1985. This data show the number of fires trending down slightly, though the acreage burned had increased before leveling off over the last 20 years.

The NWS tracks the number of days where conditions are conducive to wildfires when they issue red-flag warnings. It is little changed.

Claim: Global warming is causing snow to disappear.
Fact: Snowfall is increasing in the fall and winter in the Northern Hemisphere and North America with many records being set.

This is one claim that has been repeated for decades even as nature showed very much the opposite trend with unprecedented snows even in the big coastal cities. Every time they repeated the claim, it seems nature upped the ante more.

Alarmists have eventually evolved to crediting warming with producing greater snowfall, because of increased moisture but the snow events in recent years have usually occurred in colder winters with high snow water equivalent ratios in frigid arctic air.

Claim: Global warming is resulting in rising sea levels as seen in both tide gauge and satellite technology.
Fact: The rate of global sea level rise on average has fallen by 40% the last century. Where it is increasing – local factors such as land subsidence are to blame.

This claim is demonstrably false. It really hinges on this statement: “Tide gauges and satellites agree with the model projections.” The models project a rapid acceleration of sea level rise over the next 30 to 70 years. However, while the models may project acceleration, the tide gauges clearly do not.

All data from tide gauges in areas where land is not rising or sinking show instead a steady linear and unchanging sea level rate of rise from 4 up to 6 inches/century, with variations due to gravitational factors. It is true that where the land is sinking as it is in the Tidewater area of Virginia and the Mississippi Delta region, sea levels will appear to rise faster but no changes in CO2 emissions would change that.

Claim: Arctic, Antarctic and Greenland ice loss is accelerating due to global warming.
Fact: The polar ice varies with multidecadal cycles in ocean temperatures. Current levels are comparable to or above historical low levels

Arctic temperature records show that the 1920s and 1930s were warmer than in the 2000s. Official historical fluctuations of Arctic sea ice begin with the first satellite images in 1979. That happens to coincide with the end of the recent 1945–1977 global cold period and the resulting maximum extent of Arctic sea ice. During the warm period from 1978 until recently, the extent of sea ice has diminished, but increased in the past several years. The Greenland ice sheet has also grown with cooling after an anomalously warm 2012.

Claim: Global warming responsible for record July warmth in Alaska.
Fact:  Alaska July 2019 heat records resulted from a warm North Pacific and reduced ice in the Bering Sea late winter due to strong storms. The opposite occurred with record cold in 2012.

Alaska climate (averages and extremes) varies over time but the changes can be explained by natural variability in the North Pacific Ocean, which controls the climate regime in downstream land areas. These ocean temperature regimes (modes of the Pacific Decadal Oscillation or PDO) improves season-to-season and year-to-year climate forecasts for North America because of its strong tendency for multi-season and multi-year persistence. The PDO correlates well with tendencies for El Nino and La Nina, which have a major impact on Alaska and much of North America.

Claim: Rising atmospheric CO2 concentrations are causing ocean acidification, which is catastrophically harming marine life.
Fact: When life is considered, ocean acidification is often found to be a non-problem, or even a benefit.

Claim: Carbon pollution is a health hazard.
Fact: Carbon dioxide (CO2) is an odorless invisible trace gas that is plant food and it is essential to life on the planet. It is not a pollutant.

The term “carbon pollution” is a deliberate, ambiguous, disingenuous term, designed to mislead people into thinking carbon dioxide is pollution. It is used by the environmentalists to confuse the environmental impacts of CO2 emissions with the impact of the emissions of unwanted waste products of combustion. The burning of carbon-based fuels (fossil fuels – coal, oil, natural gas – and biofuels and biomass) converts the carbon in the fuels to carbon dioxide (CO2), which is an odorless invisible gas that is plant food and it is essential to life on the planet.

Claim: CO2-induced climate change is threatening global food production and harming natural ecosystems.
Fact: The vitality of global vegetation in both managed and unmanaged ecosystems is better off now than it was a hundred years ago, 50 years ago, or even a mere two-to-three decades ago thanks in part to CO2.

Such claims are not justified; far from being in danger, the vitality of global vegetation in both managed and unmanaged ecosystems is better off now than it was a hundred years ago, 50 years ago, or even a mere two-to-three decades ago.

With respect to managed ecosystems (primarily the agricultural enterprise), yields of nearly all important food crops have been rising for decades (i.e., the Green Revolution). Reasons for these increases are manifold, but they have mainly occurred in response to continuing advancements in agricultural technology and scientific research that have expanded the knowledge or intelligence base of farming (e.g., fertilizers, pesticides, irrigation, crop selection and breeding, computers, machinery and other devices).

This in turn necessarily breaks the causal chain between CO2 emissions and the alleged knock-on effects of global warming, such as loss of Arctic ice, increased sea level, and increased heat waves, floods, droughts, hurricanes, tornadoes, etc. These alleged downstream effects are constantly cited to whip up alarm and create demands for ever tighter CO2 regulation. EPA explicitly relied on predicted increases in such events to justify the Endangerment Finding supporting its Clean Power Plan. But as shown above, there is no evidence to support such claims, and copious empirical evidence that refutes them.