H/T to Daily Mail for reporting on this study in their article–Warming effect of greenhouse gases ‘has been overestimated’: Ice samples suggest pre-industrial air pollution was WORSE than we thought, and future temperatures will rise more slowly. Excerpts further on, but first I want to comment that Daily Mail missed out on a broader environmental story, where humans are the heroes rather than villains.

My title is based on the researchers’ conclusions confirming that humans deserve more credit than the blame usually dished out for the Modern Warm Period and ending of the Little Ice Age. The money quote from the study itself:

We show that BC (Black Carbon) deposition fluxes in most Antarctic ice cores were roughly constant from 1750 CE to the PD, despite the fact that other anthropogenic emissions—i.e., fossil fuel and biofuel emissions—increased markedly in the SH over the past century (21). This unexpected result can be explained by a large human-induced reduction in wildfire over the same period, as suggested by the fire modeling that we developed independently of the ice core records. The reduced biomass burning emissions largely compensated for the increase in BC emissions from fossil fuel and biofuels.

Thus, by focusing on soot (Black Carbon), researchers were able to compare historical periods when natural, uncontrolled biomass burning dominated, with periods when humans brought biomass burning under control and increasingly sourced their energy instead from underground: first coal, then petroleum and later gas. By cleaning the air of soot, humans removed a major climate coolant which allowed the sun to rewarm the planet. And technological improvements made the burning of coal, oil and gas much cleaner than biomass burning.

The researchers were surprised to find that the pre-industrial (here defined as 1750–1780) soot levels were considerably higher than was long thought.

‘While most studies have assumed less fire took place in the preindustrial era, the ice cores suggested a much fierier past, at least in the Southern Hemisphere,’ said atmospheric chemist Loretta Mickley, also of Harvard University.

Both the ice core data and the models conclude that soot levels were abundant before the industrial era and remained relatively constant across the 20th century.

As land use changed — and fire activity decreased — emissions from industry increased instead, the models suggest.

The study itself is  Liu et al,  Improved estimates of preindustrial biomass burning reduce the magnitude of aerosol climate forcing in the Southern Hemisphere.  Excerpts in italics wth my bolds.

Fire plays a pivotal role in shaping terrestrial ecosystems and the chemical composition of the atmosphere and thus influences Earth’s climate. The trend and magnitude of fire activity over the past few centuries are controversial, which hinders understanding of preindustrial to present-day aerosol radiative forcing.

Here, we present evidence from records of 14 Antarctic ice cores and 1 central Andean ice core, suggesting that historical fire activity in the Southern Hemisphere (SH) exceeded present-day levels. To understand this observation, we use a global fire model to show that overall SH fire emissions could have declined by 30% over the 20th century, possibly because of the rapid expansion of land use for agriculture and animal production in middle to high latitudes.

Radiative forcing calculations suggest that the decreasing trend in SH fire emissions over the past century largely compensates for the cooling effect of increasing aerosols from fossil fuel and biofuel sources.

Both climate variability and human activity drive changes in wildfire frequency and magnitude. During the past millennium, the human imprint on wildfire has become increasingly important because of landscape fragmentation through land use and, more recently, through large-scale active fire suppression

For the time scale relevant to climate change in the industrial era, a key uncertainty is where and to what extent human activity has altered fire activity

As a major source of fire ignition, humans use fire for land clearance, thus introducing fire to areas that are unlikely to burn naturally, such as tropical rainforests or peatlands.  In contrast, recent analyses have suggested that anthropogenic land cover change and landscape fragmentation significantly reduce fire in savannas by affecting fuel load and fire spread, and the fire activity over human-managed land is lower than that under natural conditions.  For example, the global burned area observed by satellite decreased 24% over the past two decades, mainly driven by agricultural expansion and intensification

Before the satellite era, regional and global fire trends have been reconstructed using several types of proxy records, such as charcoal from lake sediments, fire-scarred tree rings, and chemical impurities or trace gases preserved in ice cores. However, large discrepancies remain among different records, and there is an especially large uncertainty in the trend of fire emissions over the past two centuries. On the global scale, the use of fossil fuel and biofuels has increased and become the major source of carbonaceous aerosols, methane, ethane, and carbon monoxide (CO) in the present day (PD), which may confound interpretation of fire activity from these proxies in ice cores. Chemical transport models considering these different sources are therefore needed for the interpretation of ice core records.

Dynamic global vegetation models have been used to simulate historical fire emissions. However, different models demonstrate quite different trends of fire activity from the late preindustrial (PI) Holocene to the PD, mainly because of divergent assumptions regarding the response of fire to human demographic growth and to changes in land use and land cover.

Large uncertainty in the PI aerosol loading thus results from uncertainty in PI fire emissions. Knowledge of PI aerosol loading is, however, a key for global climate assessments that consider aerosol forcing. This forcing typically quantifies the PD aerosol effect on radiative fluxes at the top of the atmosphere (TOA), relative to the aerosol effect in the PI (1750 or 1850 CE). Biomass burning emits both light-absorbing black carbon (BC) and light-scattering organic carbon (OC) aerosols, thus directly influencing the radiative balance via aerosol-radiation interactions. Physically and chemically aged smoke particles also serve as cloud condensation nuclei (CCN), consequently altering cloud albedo and indirectly affecting the radiative balance via aerosol-cloud interactions. In addition, the cloud albedo forcing of other emissions, such as fossil fuel and biofuel emissions, is highly nonlinear and largely depends on the CCN concentration of the PI baseline, which is, in turn, determined by biomass burning in the PI. A recent work by Hamilton et al. suggests that a revised PI biomass burning emission scenario that is consistent with Northern Hemisphere ice core records can reduce the calculated mean global cloud albedo forcing magnitude by 35%, compared to the estimate using emissions prescribed in the Sixth Coupled Model Intercomparison (CMIP6). 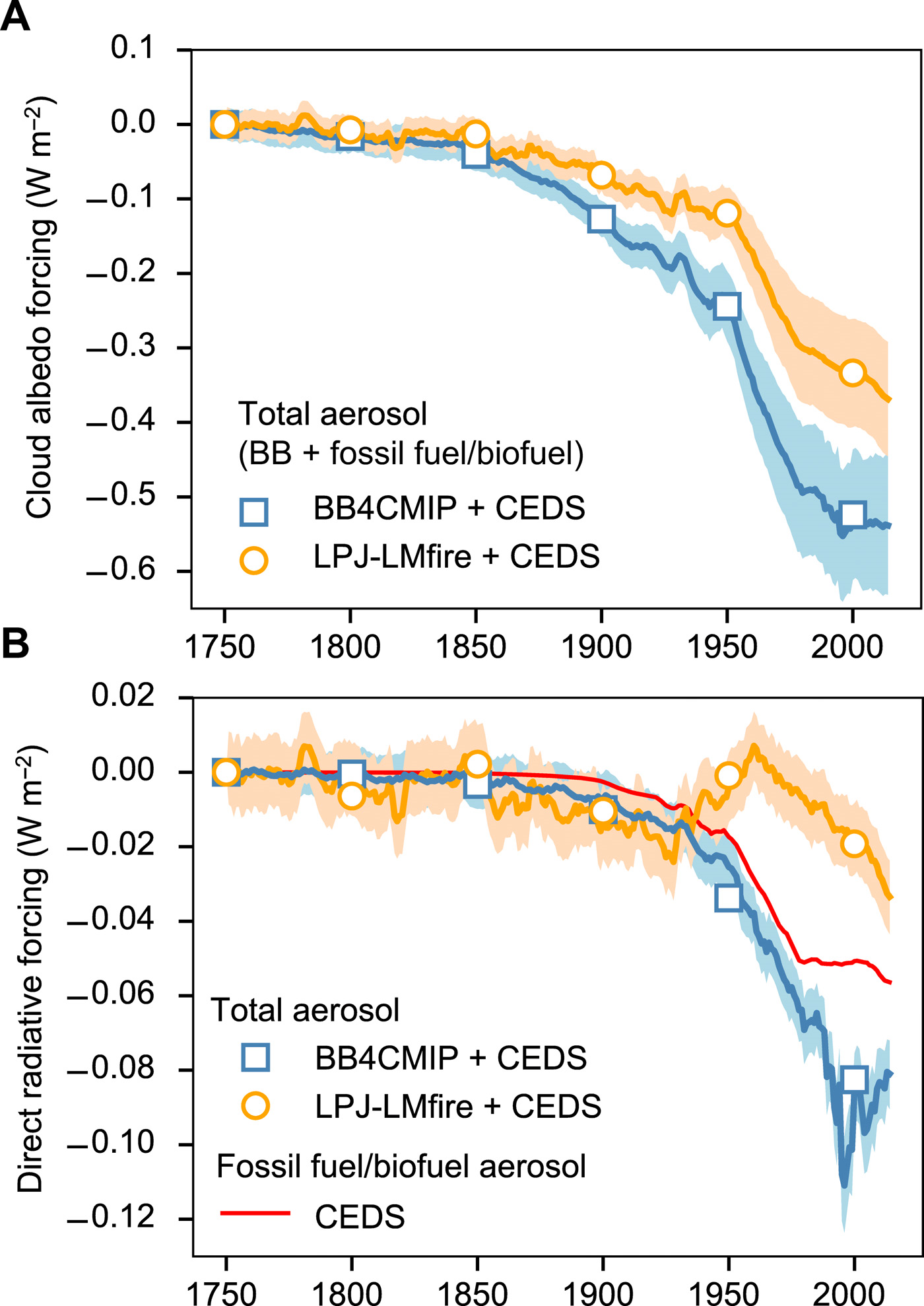 In this study, we perform a comprehensive analysis of fire activity and its associated aerosol radiative forcing for the Southern Hemisphere (SH) over the past 250 years. We achieve this by combining an array of Antarctic ice core records of BC deposition, dynamic global vegetation and fire modeling, and atmospheric chemistry transport modeling. We show that BC deposition fluxes in most Antarctic ice cores were roughly constant from 1750 CE to the PD, despite the fact that other anthropogenic emissions—i.e., fossil fuel and biofuel emissions—increased markedly in the SH over the past century (21). This unexpected result can be explained by a large human-induced reduction in wildfire over the same period, as suggested by the fire modeling that we developed independently of the ice core records. The reduced biomass burning emissions largely compensated for the increase in BC emissions from fossil fuel and biofuels.

Accurate estimates of aerosol radiative forcing are also crucial for better understanding the transient climate response (TCR) and equilibrium climate sensitivity (ECS) to increasing CO2 and more accurate projection of future climate change (40). The negative aerosol radiative forcing can, in part, cancel out the positive forcing of increasing greenhouse gases and contribute to the uncertainty of total radiative forcing. An overly large aerosol cooling implies that models might overestimate TCR and ECS to reproduce historical temperature response. A recent study using one of the latest-generation CMIP6 climate models (E3SM) suggested that reducing both the magnitudes of negative aerosol radiative forcing and climate sensitivity yields a better agreement with the observed historical record of the surface temperature. Ten in 27 of the CMIP6 climate models have an ECS higher than the upper end of the range (1.5° to 4.5°C) estimated by previous generation models. These high ECS values, however, are not supported by paleoclimate constraints. Modest aerosol forcing and climate sensitivity values have also been suggested by other observationally based studies (44, 45). Our improved fire emissions may help to bridge the gap between aerosol forcing estimates from current climate model simulations and the constraints from observations.