How does one avoid hell on earth? Who ya gonna call? Send in the consultants

After the release of the Intergovernmental Panel on Climate Change’s (IPCC) latest report, British Prime Minister Boris Johnson called it “sobering reading” and a “wake-up call” for the world’s politicians heading into the 26th Congress of the Parties (COP26), which is schedule to take place in Glasgow in November. Johnson, of course, did not intend his comments to be taken literally.

The IPCC report, formally titled “Climate Change 2021: The Physical Science Basis,” runs to 3,949 pages and contains approximately three million unreadable words from the deepest bowels of United Nations climate science that, if attempted, would induce readers to dip into the cabinet and ultimately leave them in the opposite condition, being neither sober nor awake.

UN Secretary General Antonio Guterres called the report a “code red” for humanity. I had to look up the meaning of “Code Red,” which turns out to have been the title of a 2020 blast from the heavy metal group AC/DC, with the opening lyrics:

Loading up the battery
Raising up insanity
Feeling like the old-time blues …
Don’t mess with fate
Hard fight, rough night
Dead in your sight
Fire light, a fire bright
Fire in the night

Maybe Guterres is hipper than we thought.  Not that it matters, since the dense content of the report, or even its 42-page “Summary for Policymakers,”  . . . is in fact irrelevant; the message is in the message carried by the media, which is that urgent action is needed at this “critical time,” to fight a crisis that requires a radical reduction of our greenhouse gas emissions to avoid the grave consequences of global warming.

Time Is Running Short To Avert ‘Hell On Earth,’ screamed a headline in the Financial Times.

Global consultancies — from big-names such as PwC, Deloitte, E&Y and KPMG, to the scores of less famous law firms and institutes — see the climate business as a profit-making bonanza, writes Terence Corcoran. PHOTO BY REUTERS

How does one avoid hell on earth? Who ya gonna call? Send in the consultants.

The IPCC report was instantly seized upon by one sector of the economy that has been hyping itself up for one of the greatest money-making bonanzas of all time. Global consultancies — from big-names such as PwC, Deloitte, E&Y and KPMG, to the scores of less famous law firms and institutes — see the climate business as a profit-making bonanza.

At PwC’s United Kingdom office, the consultancy’s global sustainability and climate change leader instantly issued a response to the IPCC report that pumped up the firm’s net-zero agenda. Emma Cox urged all large businesses to engage with the IPCC’s monstrosity of a report. “For companies with a global footprint, the report provides the most detailed analysis of where and how your operations, supply chains and markets are vulnerable to the impacts of climate change,” she said.

The report actually does none of the above, but Cox continued: “Climate science should remain the hard basis for all decision making and target setting. In parallel, it must be used to inform and instigate a strong policy response to close the remaining ambition gap to keep the Paris Agreement objectives alive.”

How do corporations go about making climate science the basis for “all” decision making and target setting? No doubt PwC has an answer, as does Deloitte. A recent article on Deloitte’s website warned that the net-zero carbon target requires an urgency that exceeds previous industrial revolutions: “What’s needed is a more holistic system of systems approach that unlocks critical opportunities in the transition to a low-carbon economy by working at the intersection of emerging low-carbon initiatives.”

When consultants sound like UN bureaucrats, you know something is up.

The leadership at another global giant, KPMG, has created a management team called KPMG IMPACT that’s dedicated to pursuing the UN’s sustainability development goals, which is essentially a leftist takeover of world governance. 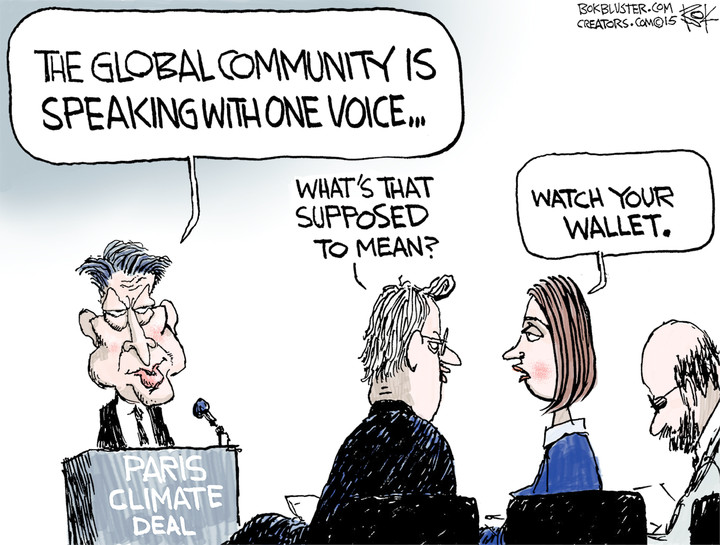 In a report issued last November, the KPMG IMPACT team made its sales pitch to corporate executives and managers: “Business is not only a critical player in achieving the net zero goal; it is also at risk from the physical effects of the climate crisis and the economic impacts of transitioning to a net zero economy.”

The world’s corporate executives, managers and directors are ultimately caught between 3,949 pages of incomprehensible and speculative IPCC science pumped up by the media, and the exhortatory offerings of consultants eager to capitalize on IPCC climate alarmism.

And so, the great consultants’ Olympic are underway, a multi-year marathon competition among firms, legal teams and sustainability gurus to cash in on the promoted fears of hell on earth if corporations do not get behind net-zero with detailed planning, strategies and policy — and big dollars.

On your mark! Get set! Call your consultant!