Itxu Díaz  writes from Spain in American Spectator This Hyperventilating Climate Columnist Needs to Calm Down.  Excerpts in italics with my bolds and added images.

Let me tell you something. The idiot who presides over the government of my country went a couple of days ago to get his picture taken in front of a still smoldering burnt forest after one of the most serious waves of wildfires in the history of Spain. The origin of the fire was unknown at the time of the visit, although we already knew the causes of its rapid spread: the local people are no longer allowed to manage the forest in the way they have been doing for centuries. Rural people are no longer allowed to keep the forests clear of undergrowth, nor are they allowed to bring in sheep and other animals that help to balance it. A barrage of green laws like the ones you are calling for are behind these bans. 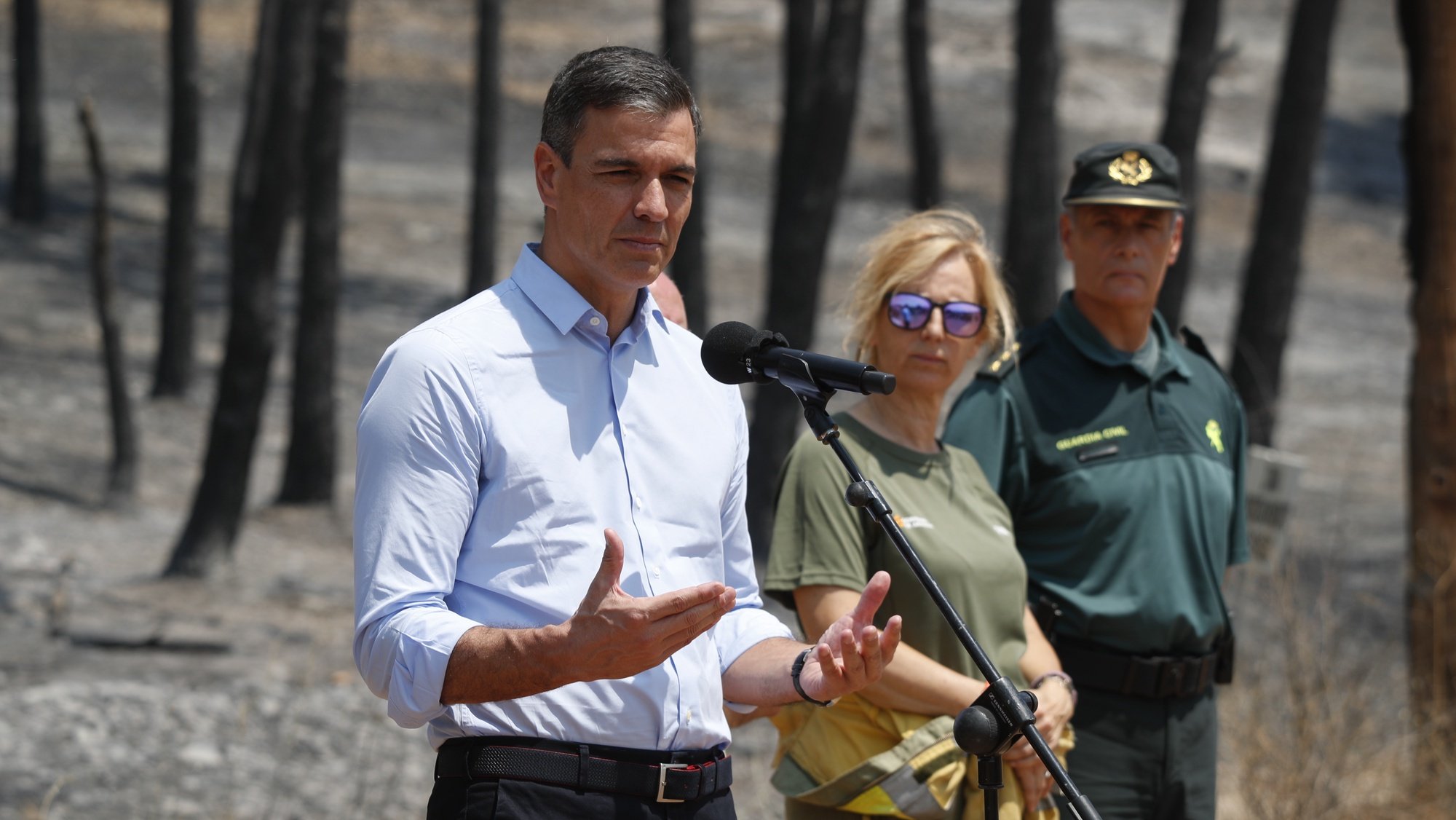 When the Spanish prime minister, Pedro Sánchez, arrived there and made statements, I assumed he would apologize or just show some sympathy towards the victims. But no. All he said was that climate change was to blame for the fire! You might imagine the expressions on the faces of the old farmers as they looked at him from behind blackened faces, their hands swollen and bloody after three days of intense fighting against the flames that had scorched their forest and homes. The funny thing is that he unwittingly told the truth: a reforestation company operating in the area has just admitted that it caused the fire while digging holes for the plantations. This is one of many companies that, driven by climate hysteria, is carrying out massive reforestations to sell greenhouse gas offset credits to large corporations.

So, indeed, climate change was to blame for the fire,
but not in the way you and Sanchez would have us believe.

My prime minister has the same pathology as you. However, Sanchez pretends he cares about the climate because he knows it is the progressive trend of the moment; the truth is that he doesn’t care because of his extreme psychopathy. I’m sure your claim is much more sincere.

I worry about the weather when it’s time to go to the beach, but what keeps me anxious at all hours is inflation, fuel prices, and the threat of a recession in the fall. Things I can touch with my hands. You worry about climate change, and that’s fine, everyone chooses their own ghosts; the bad thing is that the solutions you propose always consist of shearing the middle class with green taxes, sending us to work on bicycles, forcing us to not eat meat, and hindering the work of farmers and ranchers, thanks to whom rich Democrats eat their delicious salads and supreme steaks in Washington.

In short, the solution is to force us to live like back before the first industrial revolution, while the rich and the rulers get to enjoy all the luxuries of the 21st century, use private jets, eat huge steaks, and move around in giant cars escorted by even bigger cars, which I assume all run on rose petals as fuel.

I don’t know, kiddo, go on being overwhelmed by climate change if you want,
but do it with your savings.

You can afford your expensive vices and belief in the climate apocalypse is one of them. Of course, I’m a firm believer in freedom, but you can have them as long as you pay for them with your own damn money. And take a deep breath, buddy, or breathe into a paper bag like in Analyze That, as I heartily wish you a prompt recovery from this nervous climate crisis. I don’t want to even begin to think about your poor nervous system the day you have to deal with, God forbid, a real problem.

Footnote: The Fable of Political Survival

A provincial political leader won the parliamentary election and on the day to take the oath was greeted by the outgoing premier.  Wishing him well, his predecessor gave him three envelopes, explaining it was a tradition.  The envelopes contained advice to be consulted later on if difficulties were encountered.

Not long after taking office, criticisms started up, and the new premier opened the first envelope.  It explained:  “Blame it on the previous administration.”  He followed that advice pointing to past financial mismanagement, and the difficulty undoing bad policies and programs he had inherited.

That calmed things down for awhile, but a year later the excuses were wearing thin.  So he turned to the second envelope which gave the advice:  “Blame it on the federal government.”  A new campaign of announcements focused on delays and shortfalls of federal funding, poor coordination and liaison by federal counterparts, and counterproductive federal policies.

This quieted critics for more than a year, but alas it too began to fall on deaf ears.  It was time to open the third envelope:  ” Blame it on climate change, or else prepare three envelopes.”