“Green” Profits Can Only Rise if Citizens’ Freedoms Fall

In free markets, commodities bought and sold possess perceived value. When a buyer and seller reach an agreed upon price for any product, there is a “meeting of the minds.” The value of any natural raw material is proportional to its scarcity. The more of it there is, and the more easily it can be obtained, the less value it holds. A vendor who sells ordinary rocks cannot make a living when his product is found freely all over the ground. If he transacts in gold or silver, diamonds or rubies, however, his hard-to-find “rocks” are worth a small fortune.

If only there were a way to turn ordinary rocks into valuable commodities!

There are, in fact, two well-known ways to do so. An unscrupulous vendor could simply paint ordinary rocks gold and pretend that common minerals are rare, and an unsuspecting customer might never be the wiser. Through fraud, the seller can hijack the perceived value of his goods and undermine the agreed “meeting of the minds” between himself and any deceived customer. His “precious” rocks actually hold no value but provide him with ill-gotten gains. Over time, however, this type of fraud does not last. More discerning customers eventually catch on to the ruse, and that information is shared among prospective buyers. And unless he is quick to move on to a new town with new buyers yet to be deceived, old swindled customers are likely to end his livelihood or much worse. Engaging in fraud comes with serious personal risks.

There is another, safer way, however, to turn ordinary rocks into valuable commodities. The vendor could petition the king of the realm for the exclusive right to gather and sell ordinary rocks. If granted such an extraordinary license — whereby ordinary rocks may only be possessed if first stamped with the vendor’s mark — then an abundantly available natural resource becomes scarce overnight. What was once free now costs whatever the vendor and the king’s tax-collecting chancery decide to charge for the use of regulated rocks. Perhaps citizens with special status or recognized allegiance to the king will still get their rocks for next to nothing. Yet the classical mechanics of supply and demand still come into play for everyone else. Even if the price charged for an officially sanctioned rock is kept low, its value on secondary markets is determined entirely by the scarcity of available vendor-stamped rocks.

How much are licensed rocks worth if they are the only ones that may be legally owned? When a king and vendor conspire to make only a small fraction of available rocks “legal,” then their manufactured “unavailability” makes them extremely valuable. Legally imposed scarcity comes with much fewer personal risks. Licensed monopoly on high-demand commodities is a license to print money.

From this lens, it is easy to see why so many investors love
government intervention in energy markets. 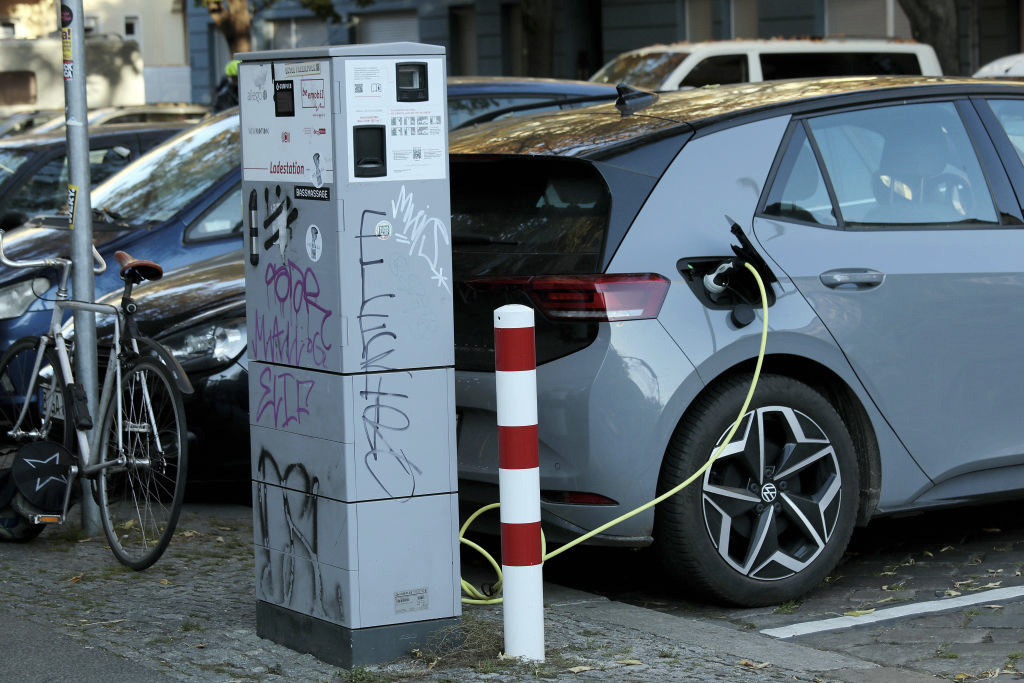 Pictured: An electric car at a charging station in Berlin, Germany. (Photo by Carsten Koall/Getty Images)

Will not these “green” initiatives wind up looking remarkably similar to the example of the unscrupulous vendor above who learned how to swindle his customers by treating common minerals as rare and painting ordinary rocks gold — or perhaps now, a resplendent green?

Is that not what the imposition of Environmental, Social, Governance (ESG) standards upon markets accomplishes? Is ESG not a concerted effort to warp trading markets with acutely political aims that seek to reward companies and capital investments for their pledged commitment to ideological beliefs rather than their likelihood for generating future profits?

When boardrooms and investors distort free markets by treating stocks and other assets as more valuable than they really are, simply because they are painted a shiny “green,” then ESG overvaluation turns misguided yet “politically correct” fantasies into gold.  Government-enforced environmentalism has created its own class of “green” billionaires. Whenever and wherever governments have mandated that citizens purchase certain goods or suffer legal consequences, the producers of those goods have made financial killings.

When governments subsidize entire industries, force citizens to purchase those industries’ products, and protect those industries from the legal consequences of their products’ harm, then money flows into the pockets of those with ownership stakes.

Does that sound remarkably similar to another political philosophy that is predicated on the abolition of all private property? What is that old saying somewhat apocryphally credited to Vladimir Lenin? “The capitalists will sell us the rope with which we will hang them.” Or perhaps today it is the “green” capitalists who make money by rendering food and fuel scarce, virtue-signaling “green” advocates who cheer the one-sided transaction, and the increasingly impoverished Western citizens who end up worse off than ever.

This much is certain: irrespective of prevailing politically correct Western “wisdom” and the current environmental “madness of crowds,” should the hydrocarbon bedrock of the global economy be traded for worthless “green” rocks, neither wealthy capitalists nor poor citizens will long survive.