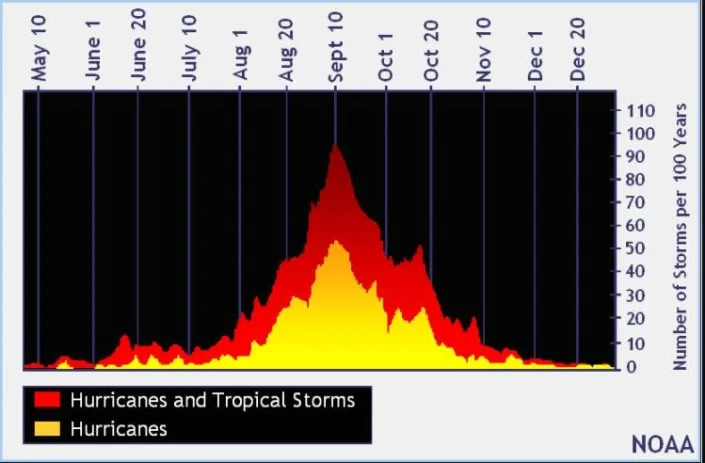 The Atlantic hurricane season runs from June 1 through Nov. 30.  The official peak of the season was Sept. 10; Hurricane Ian made landfall on September 27. The season ends November 30 and in the past 172 years, only 13 tropical storms and 7 hurricane landfalls have occurred in the continental U.S. on or after October 27.

The chart shows NH is below a normal YTD, the difference being an unusually quiet Western Pacific.  Elsewhere, the activity is around 90% YTD.

Fiona and Ian were the two major hurricanes over 100 knots with the highest ACE, followed by Earl and Danielle. Julia was the fifth hurricane, > 64 knots. Nine storms were 5 ACE or less.

Jeffrey Folks wrote August 25, 2022, at American Thinker How Terrified Should We Be of Hurricane Season This Year?.  Excerpts in italics with my bolds and added images.

I don’t know how every year can be “above average,” something that defies the laws of statistics. I suspect that it has to do with the strong bias of climate scientists rather than the strength of hurricanes. And in fact, hurricanes have been “fewer than average” this year and for many years recently.

So far, halfway through the hurricane season, no Atlantic storms have made landfall on U.S. soil.

This lack of severe storms defies the dire predictions of global warming alarmists: that rising temperatures will cause catastrophic storms. In reality, one reason why there are fewer and less severe storms this year is that the Atlantic waters have been cooler than usual. That, combined with drier air over the Atlantic, caused by the atmospheric drift of Saharan dust, has caused potential tropical storms to dissipate.

Predictions of “very active” storm seasons are widely publicized each spring, but the reality of fewer and less severe storms never makes its way into the media.

The truth is that some hurricane seasons are more active and some less so. The same is true of tornadoes, droughts, floods, and other natural phenomena. But only the extreme events get publicized and treated as confirmation of climate change. If the media were honest, they would report the truth that the weather has not changed a great deal, at least not since the end of the Little Ice Age in 1850 — and the warmer temperatures since then have been a blessing.

Global temperatures have risen one degree Celsius since the low point of 1850, so severe storms may be somewhat more common than in the distant past. But death rates have dropped precipitously. The worst hurricane in American history was the Great Galveston hurricane of September 8, 1900, which killed some 8,000 people. The worst tornado recorded in U.S. history was the Tri-State Tornado of March 18, 1925, which killed 751 people. Both of these storms occurred long before the period in which alarmists like Al Gore predicted that global warming would cause catastrophic storms — and clearly, they were not “man-made.”

We are safer now because of technology. With advance warning, populations can take shelter or evacuate, and a smartphone or weather radio is all that is necessary to receive warnings. As warning systems become more sophisticated, fewer people will die or be injured by severe weather events. But the development of those systems depends on the ability of individuals to pay for them, and recent government spending will make that less likely — just as it will affect medical research, transportation safety, and police protection.

In addition to the “regular” budget of $5 trillion, this year, Biden has appropriated $7 trillion in emergency spending, much of it for climate change. But that money is not intended to protect us from severe storms. It is being spent on green energy boondoggles that enrich connected insiders but impoverish average citizens. And that impoverishment is the heart of the problem.

With less wealth, it is more difficult to protect oneself against severe weather. Even in years like 2022, which have so far been less active than normal, homeowners must be vigilant if they live along the Atlantic Coast, especially in Florida and other hurricane-prone states. Three months of the hurricane season remain. The odds are that an Atlantic hurricane will strike the East Coast. If a hurricane does make landfall, the media will tout it as proof of the catastrophic effects of global warming. In reality, it will just prove that the climate hasn’t changed much.

Since the destructive 2004 hurricane season, Florida has required all new construction to incorporate tie-down roofing and storm-resistant glass, measures that have made life safer for residents. And since taking office, Gov. Ron DeSantis has maintained storm preparedness and worked to protect citizens of Florida.

But Biden’s ludicrously entitled “Inflation Reduction Act” does nothing to strengthen homes and businesses. Its primary aim is to reward Democrat donors, including unions and green energy corporations. How does the mandate of a “union wage” included in the bill help protect Americans against severe storms?

But prosperity really is the solution to global warming. There may or may not be more severe storms this year or the next. Human beings have no control over that. But they can control how well prepared they are for the events — that is, if government leaves them with enough money to do so.