People are duped by false alarms about Arctic sea ice because they have (subliminally) bought into the notion likening the Arctic to their home refrigerator. This post is to dissuade you from taking on board that false analogy.

Inside Your Fridge
When you put liquid water into your fridge, it releases heat, both sensible and latent, the air in the compartment warms and the heat engine extracts the warming to maintain a constant temperature.

The energy is substantial: it takes 417 kj per kilogram of water to go from room temperature (20C) to ice or vice-versa. The math from Wikipedia is:

And of course if you leave the door open, the refrigeration unit is unable to remove the heat efficiently, the freezing process slows and less ice is produced. Also when electric power is lost, everything frozen starts melting and perishable food spoils.

Alarmists sometimes say that when the jet stream wanders south from the Arctic (“the polar vortex”), it is like leaving the fridge door open and sea ice will be lost as a result. This is upside down and backwards, since the Arctic does not at all resemble a refrigerator.

Inside the Arctic
In the Arctic (and also at the South Pole), the air is in direct contact with an infinite heat sink: outer space. The tropopause (where radiative loss upward is optimized) is only 7 km above the surface at the poles in winter, compared to 20 km at the equator. There is no door to open or close; the air is constantly convecting any and all energy away from the surface for radiation into space.

Instead of an open door, Arctic ice melts when the sun climbs over the horizon. Both the water and air are warmed, and the ice cover retreats until sundown in Autumn.

Most people fail to appreciate the huge heat losses at the Arctic pole. Mark Brandon has an excellent post on this at his wonderful blog, Mallemaroking.

By his calculations the sensible heat loss in Arctic winter ranges 200-400 Wm2.

The annual cycle of sensible heat flux from the ocean to the atmosphere for 4 different wind speeds.

As the diagram clearly shows, except for a short time in high summer, the energy flow is from the water heating the air.

If you want to be really inappropriate then in 2 hours, that part of the ocean lost more energy than it takes to run the London Underground for one year.

Remember that is just one component and not the full heat budget – which is partially why it is inappropriate. For the full budget we have to include latent heat flux, long wave radiation, short wave radiation, energy changes through state changes when ice grows and decays, and so on. Also large heat fluxes lead to rapid sea ice growth which then insulates the ocean from further heat loss.”

The Key Difference
The really big paradigm shift is to understand that the sea ice extent itself regulates the periods of warming and cooling air temperatures, and not the other way around. Of course, there is a considerable lag, on the order of several decades, as you would expect in any system with massive capacity and momentum. Zakharov (here) shows how Arctic ice functions as a self-oscillating system: 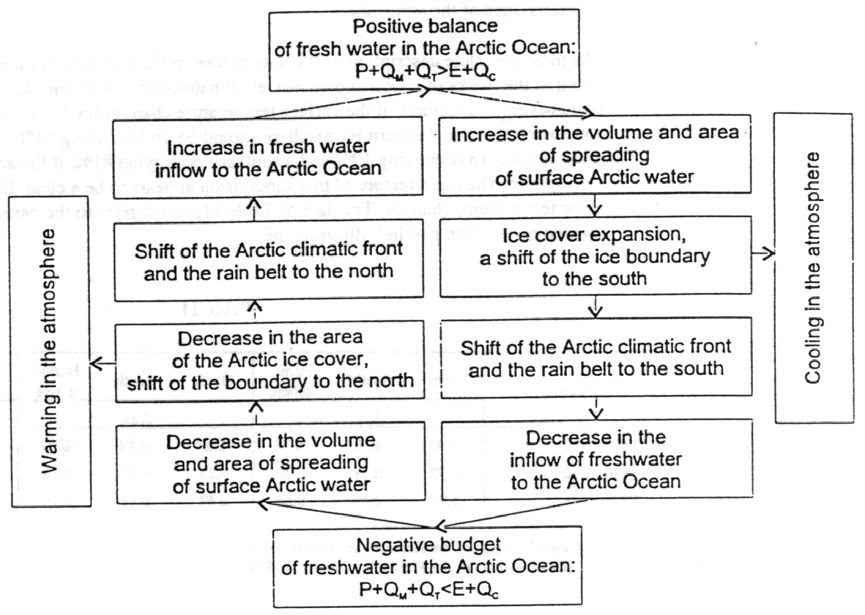 Summary: Why the Arctic is not a Refrigerator

2.  Ice melts in a fridge when warmer air is allowed in.
Ice melts in the Arctic when the sun shines.