This is a reblog of a post from dedicated environmentalist Michael Lewis which I am happy to put here following his comments. He does not agree with me on some matters and thinks I am too hard on environmental activists, ascribing nefarious motives that they do not have, in his opinion and experience.

At the same time, we seem to share a view that the Global Warming bandwagon is detrimental to the environment by diverting time, effort and resources to fight an imaginary problem, while real and serious environmental and social degradations and threats are not adequately addressed.

I appreciate his position particularly because it discredits the lie that global warming skeptics are all uncaring capitalists and big oil shills. I especially like the quote from Maslow, whose hierarchy of human needs contributed much to organizational sociology and motivational management. In the interest of singing from the same hymnbook, here is Between the Hammer and Nail from Michael Lewis.

Yes, I know everyone has jumped aboard the Global Warming bandwagon, hammered together the climate change apartment house and moved in lock stock and barrel to the CO2-causes-Climate-Change studio apartment. It’s a shame that such a ramshackle edifice dominates the climate science skyline.

“If all you have is a hammer, everything looks like a nail.” Abraham Maslow, The Psychology of Science, 1966

Climate change has become the cause celebre of modern thought and action, the hammer employed to bang on almost everything else. Every Progressive cause from highway congestion to homelessness simply must be cast in the glare of Climate Change and/or Global Warming. Every organization from the United Nations to my local County Board of Supervisors is invested in the concept as the source of funding for addressing all social ills.

The basis for this totalitarian acceptance of human caused climate change, aka Anthropogenic Global Warming (AGW) is the theory of radiative forcing of atmospheric warming, the so-called Greenhouse Effect. As we’ll see later, this is an instance of an attempt to prove an experiment by invoking a theory, rather than the accepted scientific process of proving a theory by experimentation and hypothesis testing.

Carbon dioxide radiative forcing was first proposed by Joseph Fourier in 1824, demonstrated by experiment by John Tyndall in 1859, and quantified by Svante Arrhenius in 1896. The unfortunate and inaccurate descriptor “Greenhouse Effect” was first employed by Nils Gustaf Ekholm in 1901.

Let’s look at the observations and assumptions that have led to this erroneous conclusion.

Items 1 and 2 are observations with which few climate scientists disagree, though there may be quibbles about the details. CO2 and temperature have both increased, since at least 1850.  Items 3 and 4 are assumptions because there is no evidence to support them. The correlation between global average surface temperature and atmospheric CO2 concentration is not linear and it is not causal. In fact, deep glacial ice cores record that historical increases in CO2 concentration have lagged behind temperature rise by 200 to 800 years, suggesting that, if anything, atmospheric CO2 increase is caused by increase in global average surface temperature.

However, in the scientific method, we do not employ a theory to prove an experiment. Since we have only one coupled ocean/atmosphere system to observe, the experiment in this case is the Earth itself, human CO2 production, naturally occurring climate variation, and observed changes in atmospheric CO2 and global average surface temperature. There is no control with which to compare observations, thus we can make no scientifically valid conclusions as to causation. If we had a second, identical planet earth to compare atmospheric changes in the absence of human produced CO2, we would be able to reach valid conclusions about the role of CO2 in observed climate variation, and we would have an opportunity to weigh other causes of climate variation shared by the two systems.

To escape from our precarious position between the hammer and the nail, we should understand all possible causal factors, human caused, naturally occurring, from within and from without the biosphere in which all life lives.

Based on our current cosmology, it is my conclusion that we live in a chaotic, nonlinear, complex coupled ocean/atmospheric adaptive system, with its own set of naturally occurring and human created cycles that interact to produce the climate variation we observe. This variation is not the simple linear relationship touted by the IPCC and repeated in apocalyptic tones by those who profit from its dissemination, but rather is a complex interplay of varying influences, that results in unpredictable climate variation.

More about chaos and complexity in the next installment. 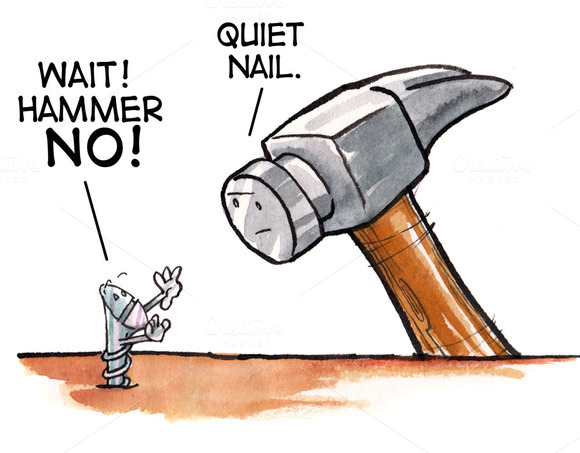 IPCC thinks life is linear, but in fact it looks more cyclical.

Could it be that climate activists are working on their own needs at the top two tiers, and want to impose their projects onto billions of people struggling with the most fundamental needs?