An Historical, not Hysterical Perspective

Much of the hysteria over atmospheric CO2 arises from dismissing the past, and thus losing the context for interpreting the present.  Recently, one scientist suggested that climate researchers should be schooled in geology before commenting on climate change.  Instead of that, of course, most of them are based in environmentalism.  So as a public service this post presents some excellent and time-tested evidence produced by Dr Guy LeBlanc Smith.  h/t Jeff Hayes

This graph, compiled by Ex-CSIRO scientist Dr Guy LeBlanc Smith PhD, AIG, AAPG, from data obtained from deep core drilling on the Greenland Ice Sheet, shows that all life on earth now, including polar bears, coral reefs and humans, have survived massive sea level changes and rapid and dramatic changes in earth’s temperature. There were no coal fired power stations and no gas guzzling cars to cause these changes then, and the same natural forces will change the future. Humans will need wits and resources to cope with future changes and every diversion of our resources to nonsense like Cap-n-Tax will reduce the chances that we will survive future changes.

The real danger to all life on earth is NOT warming and abundant aerial plant food (carbon dioxide) – the real threat is ICE and plant starvation.

Taxing carbon dioxide under the misguided perception that it causes temperature change is like placing a tax on ambulances because they cause vehicle accidents. Like CO2, ambulances arrive after the event.

Temperature goes up and some time later CO2 goes up.

Clearly there is a parallel… Using the logic of many misguided politicians and their advisers, it would seem feasible through careful assumption-based computer modelling to show this… and build a scenario for taxing ambulances and thereby reducing vehicle accidents.

I am a concerned professional research scientist with over 30 years experience, latter part with CSIRO as a Principal Research Scientist. As my funding no longer depends on politicians, I am free to make my information and conclusions public.

We are now in the closing stages of the Cap-n-Tax debate. We need to rely on evidence and facts, not propaganda, before such crucial decisions are taken.

The real world evidence such as revealed in the ice cores suggests that the Carbon Pollution Reduction Scheme is built on fraud.

The Really Long View: How Does the Modern Warming Period Compare 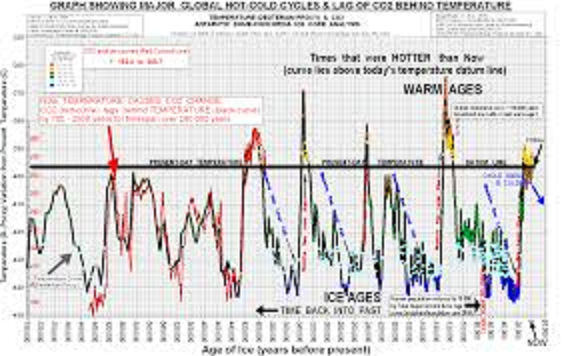 Dr. Smith’s high res graph was blocked by both Facebook and Tinypic, so this is the best I can show now.

Dr. Smith produced an additional graph to display how temperatures have changed over the ages compared to the present and how measured CO2 varies in response to measured temperature changes. Of course, these estimates come from proxies since the timescale goes back through several ice ages.

But the message from the ice cores is clear: Through the ages, CO2 responds to temperatures and not the other way around.  The other message is also clear: Climates change between warm and cool, and warm has always been good for humans and the biosphere. We should concern ourselves with preparing for the cold times with robust infrastructure and reliable, affordable energy.

H/t to Jeff Hayes, who recently posted this letter from Dr. Smith (here)

Thanks for using my chart.

I too have been fighting this fraudulent ‘human-caused & CO2 driven’ climate variation issue for decades.

I have used this graphic (with others) to counter teaching this fraud in our Australian education system, who started teaching the AGW fraud to school kids, mine particularly, and I wanted information that would be seen in context easily by kids and the less illiterate, so they would not get lost in text.

Being a scientist, I further wanted to see the climate information from source, to check its veracity, hence downloading the data from NOAA at Boulder all those years back, and making my own graphic to show context. Al Gore would not have got started if he had overlaid his temperature and CO2 graphics on a common timeline… where the temperature driver is clearly exposed. I am truly surprised these ‘green terrorists’ are still free to prosecute this fraud.

I fought against this from within the organisation for years. There are still those there who like the gravy train funding resulting from supporting the erroneous but politically convenient mantra of humans and CO2 climate alarm, despite it flying in the face of decades of empirical science showing AGW is a myth and fraud.

I would draw your attention to the Clexit campaign, which I am a signatory and founding member…

To view this release with all images intact click:

I have other graphics there… http://carbon-sense.com/2013/11/30/nothing-new-about-climate-change/

I still enjoy the video graphics at CO2 science.org website, of the pea growing in CO2 enriched atmosphere…

Also their detailed demonstration of the agricultural production increases from rising CO2 levels, all at no cost.

Gratifying broadly that doubling CO2 will increase crop production by more than half again, whilst using 20% less water whilst doing this, and further increasing resilience of plants to heat stress by an additional 10 degrees celsius – all for free! Why are we trying to tax this?

Anyway, thanks for the response to my graphic.

The stone-age didn’t end because we ran out of stones…think smart!