Just in time for Christmas, we have news of a worldwide outbreak of shrinking reindeer caused by global warming/climate change. A websearch of “shrinking reindeer” returns links to hundreds of media reports from everywhere, evidence of the global nature of this event.

That is, until you read past the scary headlines and discover that it is one story repeated endlessly. Once again, the internet serving as the global village rumor mill. We can relax somewhat in that reports from places like Malaysia, India and California do not mention the local reindeer, so they must be OK.

All of this attention and alarm arises from one report about one place: Svalbard (Arctic islands belonging to Norway). Moreover, the animals are not going extinct yet, rather a decline of 12% of adult body weight has been observed over the last 30 years. Project that out to the end of the century though, and the reindeer are toast, unless we do something.

On the other hand, there are facts and circumstances to consider.  From the Reindeer Fact sheet (here) 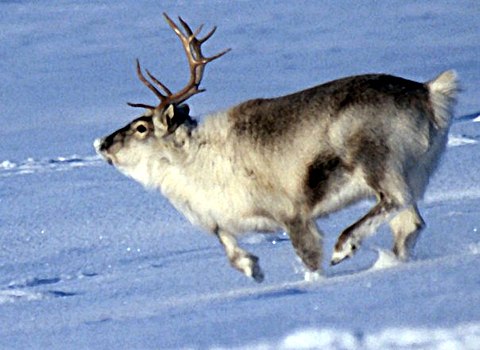 From the Norwegian Polar Institute (here)

The subspecies is endemic to the Svalbard islands, where it has lived for at least 5,000 years, and become well adapted to the harsh climate, being found on nearly all non-glaciated areas of the archipelago. It is the most northern living herbivore mammal in the world.

The Svalbard reindeer is adapted to survive the variable climatic conditions and the high degree of seasonality in Svalbard. They are very sedentary and thus have low energy demands, and they have an outstanding ability to use their own body reserves (both fat and muscle tissue) when access to food is limited in the winter. The thick fur contributes to insulation against low temperatures and wind. Starvation is the most common cause of mortality. This occurs due to worn out teeth from grazing on sparse vegetation among stones and gravel or due to lack of food when ice locks pastures – caused by ‘rain-on-snow’ events in winter. The population dynamics of the Svalbard reindeer is regulated by a combination of density dependent processes and climatic variability causing high mortality and low reproduction.

And there are large populations of reindeer outside of Svalbard, exhibiting remarkable hardiness.

Some populations of the North American caribou migrate the furthest of any terrestrial mammal, travelling up to 5,000 km (3,100 mi) a year, and covering 1,000,000 km2 (390,000 sq mi). Other populations (e.g., in Europe) have a shorter migration, and some, for example the subspecies R. t. pearsoni and R. t. platyrhynchus (both restricted to islands), are residents that only make local movements. Normally travelling about 19–55 km (12–34 mi) a day while migrating, the caribou can run at speeds of 60–80 km/h (37– 50 mph). During the spring migration smaller herds will group together to form larger herds of 50,000 to 500,000 animals, but during autumn migrations the groups become smaller, and the reindeer begin to mate.

And the hype goes on, amplified if anything to counteract the effect of an incoming US administration who dares to disbelieve in climatism.

Last year there was much ado about Siberian reindeer infected with ricin and humans (one) dying from eating the meat. It turned out to be a report that is put out periodically, the timing associated with the governmental planning and budgeting cycle. Perhaps we will hear about this again in five years. Or sooner if Trump pursues a rational energy policy.  One also wonders where Norway is in planning and budgeting for polar research activities.

Of course, the reindeer are being recruited to replace the polar bears, who did not get the memo and instead multiplied their way out of endangerment.