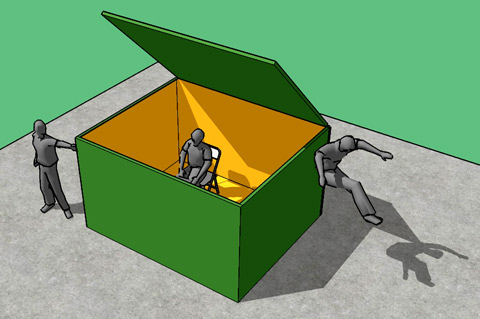 Steve Goreham has published a new primer that unmasks “sustainable development” fallacies. Outside the Green Box is previewed at Master Resource. Excerpts below:

Modern society is beset by green ideology, possibly the greatest delusion in recent history. Schools teach children that carbon dioxide is a pollutant, that polar bears are endangered, that population growth is harmful, that pesticides cause cancer, that energy use is destroying the environment, that warm climate is bad for humanity, and that crude oil is all but exhausted. Further, we can save the planet if we change our light bulbs, plant a tree, forego eating meat, and drive a Prius.

Over the last 30 years, climate change ideology became the core of sustainable development and the green movement. Most scientific organizations, most leading universities, most of the Fortune 500 companies, faith-based organizations, and the majority of the news media have publicly endorsed this theory.

But from Chapter 5, scientific data shows that natural forces, not human emissions, dominate Earth’s climate. Water vapor, not carbon dioxide or methane, is Earth’s dominant greenhouse gas. Human industry contributes less than two percent to the greenhouse effect. Earth’s temperatures 1,000 years ago were naturally warmer than today and have been gently cooling over the last 8,000 years.

Contrary to warnings, history shows that today’s storms, floods, and droughts are neither more frequent nor more intense than in past centuries. According to satellite data, surface temperatures show no significant warming over the last eighteen years, evidence that the world’s climate models are in error.

Much of government policy, academic thought, and public opinion stands on fears created and promulgated by environmental sustainable development. The philosophy that humans are too many, too polluting, climate destroying, and profligate wasters of natural resources holds today’s society in a powerful psychological grip. Thousands of energy and environmental laws are justified on these misconceptions.

Energy consumption is not a villain. Nations that consume the most energy per person discharge the lowest level of air and water pollutants per person. Low-cost energy provides economic growth and generates capital for pollution control. Carbon dioxide is not a pollutant. Hundreds of peer-reviewed studies show that increased levels of CO2 result in faster and larger plant growth. The recent rise in atmospheric CO2 is actually greening the Earth.

Steve Goreham is a speaker, author, and researcher of environmental issues and public policy. He holds an MBA from the University of Chicago and a BS/MS in Electrical Engineering from the University of Illinois. More at his website stevegoreham.com.  For example, he provides a synopsis of Climate Facts including these topics:

The Sky is not our limit.