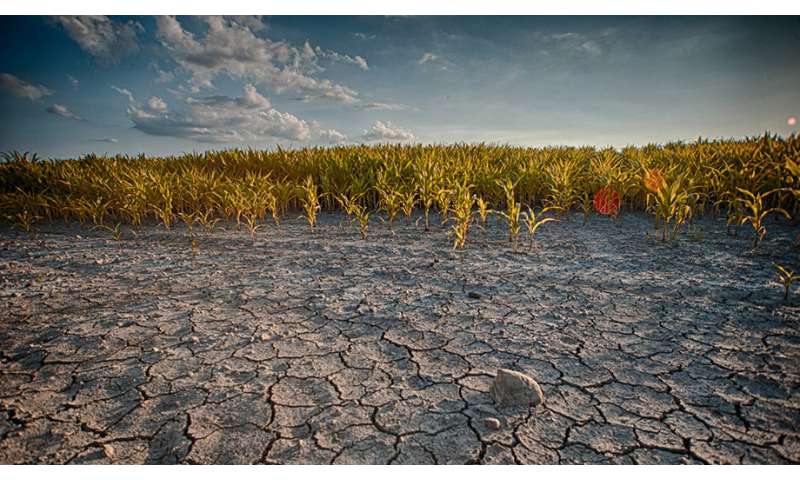 A recent article displays the intersection of fears and facts comprising the climate paradox, in this case the issue of precipitation.  Rainfall’s natural variation hides climate change signal appeared today in phys.org by Kate Prestt, Australian National University.  Excerpts with my bolds.

New research from The Australian National University (ANU) and ARC Centre of Excellence for Climate System Science suggests natural rainfall variation is so great that it could take a human lifetime for significant climate signals to appear in regional or global rainfall measures.

Even exceptional droughts like those over the Murray Darling Basin (2000-2009) and the 2011 to 2017 Californian drought fit within the natural variations in the long-term precipitation records, according to the statistical method used by the researchers.

This has significant implications for policymakers in the water resources, irrigation and agricultural industries.

“Our findings suggest that for most parts of the world, we won’t be able to recognise long term or permanent changes in annual rainfall driven by climate change until they have already occurred and persisted for some time,” said Professor Michael Roderick from the ANU Research School of Earth Sciences.

“This means those who make decisions around the construction of desalination plants or introduce new policies to conserve water resources will effectively be making these decisions blind.

“Conversely, if they wait and don’t act until the precipitation changes are recognised they will be acting too late. It puts policymakers in an invidious position.”

To get their results the researchers first tested the statistical approach on the 244-year-long observational record of precipitation at the Radcliffe Observatory in Oxford, UK. They compared rainfall changes over 30-year-intervals. They found any changes over each interval were indistinguishable from random or natural variation.

They then applied the same process to California, which has a record going back to 1895, and the Murray Darling Basin from 1901-2007. In both cases the long dry periods seem to fit within expected variations.

Finally, they applied the process to reliable global records that extended from 1940-2009. Only 14 per cent of the global landmass showed, with 90 per cent confidence, increases or decreases in precipitation outside natural variation.

Professor Graham Farquhar AO also from the ANU Research School of Biology said natural variation was so large in most regions that even if climate change was affecting rainfall, it was effectively hidden in the noise.

“We know that humans have already had a measurable influence on streamflows and groundwater levels through extraction and making significant changes to the landscape,” Professor Farquhar said.

“But the natural variability of precipitation found in this paper presents policymakers with a large known unknown that has to be factored into their estimates to effectively assess our long-term water resource needs.”  The research has been published in the journal Proceedings of the National Academy of Sciences.

Much like sea level rise, scientists fearing the worst seek and hope to find a nanosignal inside noisy imprecise measurements of a naturally varying phenomenon.