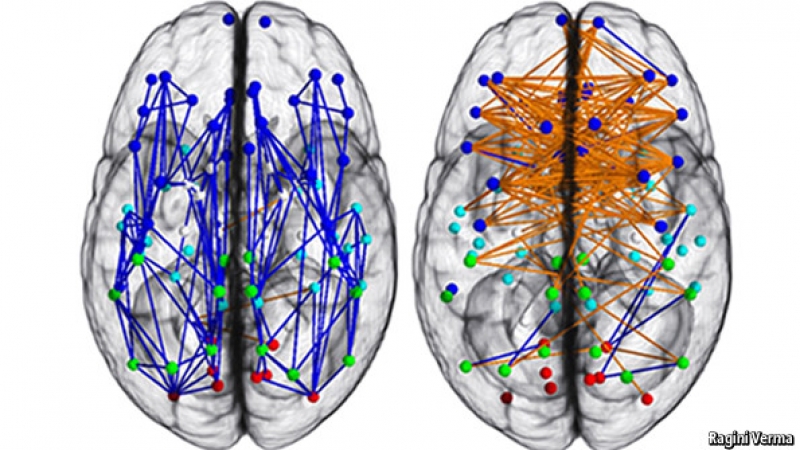 As Jordan Peterson has pointed out, an ideology takes a partial truth and asserts it as the whole truth, and nothing but the truth.  With global warming\climate change, we see how a complex, poorly understood natural system is reduced to a simplistic tweet:  “Ninety-seven percent of scientists agree: climate change is real, man-made and dangerous.”  That is the work of a small but dedicated group of ideologues who captured and overturned climate science so that it now only functions as a tool of political operatives.

The post shows how decades of painstaking work in neurological science are being attacked by gender ideologues, who cannot tolerate any biological differences between men and women.

Larry Cahill writes at Quillette Denying the Neuroscience of Sex Differences Excerpts in italics with my bolds.

For decades neuroscience, like most research areas, overwhelmingly studied only males, assuming that everything fundamental to know about females would be learned by studying males. I know — I did this myself early in my career. Most neuroscientists assumed that differences between males and females, if they exist at all, are not fundamental, that is, not essential for understanding brain structure or function. Instead, we assumed that sex differences result from undulating sex hormones (typically viewed as a sort of pesky feature of the female), and/or from different life experiences (“culture”). In either case, they were dismissable in our search for the fundamental. In truth, it was always a strange assumption, but so it was.

Gradually however, and inexorably, we neuroscientists are seeing just how profoundly wrong — and in fact disproportionately harmful to women — that assumption was, especially in the context of understanding and treating brain disorders. Any reader wishing to confirm what I am writing can easily start by perusing online the January/February 2017 issue of the Journal of Neuroscience Research, the first ever of any neuroscience journal devoted to the topic of sex differences in its entirety. All 70 papers, spanning the neuroscience spectrum, are open access to the public.

In statistical terms, something called effect size measures the size of the influence of one variable on another. Although some believe that sex differences in the brain are small, in fact, the average effect size found in sex differences research is no different from the average effect size found in any other large domain of neuroscience. So here is a fact: It is now abundantly clear to anyone honestly looking, that the variable of biological sex influences all levels of mammalian brain function, down to the cellular/genetic substrate, which of course includes the human mammalian brain.

The mammalian brain is clearly a highly sex-influenced organ. Both its function and dysfunction must therefore be sex influenced to an important degree. How exactly all of these myriad sex influences play out is often hard, or even impossible to pinpoint at present (as it is for almost every issue in neuroscience). But that they must play out in many ways, both large and small, having all manner of implications for women and men that we need to responsibly understand, is now beyond debate — at least among non-ideologues.

Recognizing our obligation to carefully study sex influences in essentially all domains (not just neuroscience), the National Institute of Health on January 25, 2016 adopted a policy (called “Sex as a Biological Variable,” or SABV for short) requiring all of its grantees to seriously incorporate the understanding of females into their research. This was a landmark moment, a conceptual corner turned that cannot be unturned.

But the remarkable and unprecedented growth in research demonstrating biologically-based sex influences on brain function triggered 5-alarm fire bells in those who believe that such biological influences cannot exist.

Since Simone de Beauvoir in the early 1950s famously asserted that “One is not born, but rather becomes, a woman,” and John Money at Johns Hopkins shortly thereafter introduced the term “gender” (borrowed from linguistics) to avoid the biological implications of the word “sex,” a belief that no meaningful differences exist in the brains of women and men has dominated U.S. culture. And God help you if you suggest otherwise! Gloria Steinem once called sex differences research “anti-American crazy thinking.” Senior colleagues warned me as an untenured professor around the year 2000 that studying sex differences would be career suicide. This new book by Rippon marks the latest salvo by a very small but vocal group of anti-sex difference individuals determined to perpetuate this cultural myth.

A book like this is very difficult for someone knowledgeable about the field to review seriously. It is so chock-full of bias that one keeps wondering why one is bothering with it. Suffice to say it is replete with tactics that are now standard operating procedure for the anti-sex difference writers. The most important tactic is a comically biased, utterly non-representative view of the enormous literature of studies ranging from humans to single neurons. Other tactics include magnifying or inventing problems with disfavored studies, ignoring even fatal problems with favored studies, dismissing what powerful animal research reveals about mammalian brains, hiding uncomfortable facts in footnotes, pretending not to be denying biologically based sex-influences on the brain while doing everything possible to deny them, pretending to be in favor of understanding sex differences in medical contexts yet never offering a single specific research example why the issue is important for medicine, treating “brain plasticity” as a magic talisman with no limitations that can explain away sex differences, presenting a distorted view of the “stereotype” literature and what it really suggests, and resurrecting 19th century arguments almost no modern neuroscientist knows of, or cares about. Finally, use a catchy name to slander those who dare to be good scientists and investigate potential sex influences in their research despite the profound biases against the topic (“neurosexists!”). These tactics work quite well with those who know little or nothing about the neuroscience.

The book is downright farcical when it comes to modern animal research, simply ignoring the vast majority of it. The enormous power of animal research, of course, is that it can establish sex influences in particular on mammalian brain function (such as sex differences in risk-taking, play behavior, and responses to social defeat as just three examples) that cannot be explained by human culture, (although they may well be influenced in humans by culture.) Rippon engages in what is effectively a denial of evolution, implying to her reader that we should ignore the profound implications of animal research (“Not those bloody monkeys again!”) when trying to understand sex influences on the human brain. She is right only if you believe evolution in humans stopped at the neck.

Rippon tries to convince you (and may even believe herself) that it is impossible to disentangle biology from culture when investigating sex differences in humans. This is false. I encourage the interested reader to see the discussion of the excellent work doing exactly this by a sociologist named J. Richard Udry in an article I wrote in 2014 for the Dana Foundation’s “Cerebrum,” free online.

Rippon does not mention Udry’s work, or its essential replication by Udry’s harshest critic, a leading sociologist who has described herself as a “feminist” who now “wrestles” with testosterone. (The Dana paper “Equal ≠ Same” also deconstructs the specious “brain plasticity” argument on which Rippon’s narrative heavily rests.)

Of course, Rippon is completely correct in arguing that neuroscientists (and the general public) should remember that “nature” interacts with “nurture,” and should not run wild with implications of sex difference findings for brain function and behavior. We must also reject the illogical conclusion that sex influences on the brain will mean that women are superior, or that men are superior. I genuinely do not know a single neuroscientist who disagrees with these arguments. But she studiously avoids an equally important truth: That neuroscientists should not deny that biologically-based sex differences exist and likely have important implications for understanding brain function and behavior, nor should they fear investigating them.

You may ask: What exactly are people like Rippon so afraid of? She cites potential misuse of the findings for sexist ends, which has surface plausibility. But by that logic we should also stop studying, for example, genetics. The potential to misuse new knowledge has been around since we discovered fire and invented the wheel. It is not a valid argument for remaining ignorant.

After almost 20 years of hearing the same invalid arguments (like Bill Murray in “Groundhog Day” waking up to the same song every day), I have come to see clearly that the real problem is a deeply ingrained, implicit, very powerful yet 100 percent false assumption that if women and men are to be considered “equal,” they have to be “the same.” Conversely, the argument goes, if neuroscience shows that women and men are not the same on average, then it somehow shows that they are not equal on average. Although this assumption is false, it still creates fear of sex differences in those operating on it. Ironically, forced sameness where two groups truly differ in some respect means forced inequality in that respect, exactly as we see in medicine today.

Women are not treated equally with men in biomedicine today because overwhelmingly they are still being treated the same as men (although this is finally changing). Yet astoundingly, and despite claiming she is not anti-sex difference, Rippon says “perhaps we should just stop looking for [sex] differences altogether?” Such dumbfounding statements from a nominal expert make me truly wonder whether the Rippons of the world even realize that, by constantly denying and trivializing and even vilifying research into biologically-based sex influences on the brain they are in fact advocating for biomedical research to retain its male subject-dominated status quo so disproportionately harmful to women.

So are female and male brains the same or different? We now know that the correct answer is “yes”: They are the same or similar on average in many respects, and they are different, a little to a lot, on average in many other respects. The neuroscience behind this conclusion is now remarkably robust, and not only won’t be going away, it will only grow. And yes, we, of course, must explore sex influences responsibly, as with all science. Sadly, the anti-sex difference folks will doubtless continue their ideological attacks on the field and the scientists in it.

Thus one can at present only implore thinking individuals to be wary of ideologues on both sides of the sex difference issue — those who want to convince you that men and women are always as different as Mars and Venus (and that perhaps God wants it that way), and those who want to convince you of the demonstrably false idea that the brains of women and men are for all practical purposes the same (“unisex”), that all differences between women and men are really due to an arbitrary culture (a “gendered world”), and that you are essentially a bad person if you disagree.

No one seems to have a problem accepting that, on average, male and female bodies differ in many, many ways. Why is it surprising or unacceptable that this is true for the part of our body that we call “brain”? Marie Curie said, “Nothing in life is to be feared, it is only to be understood. Now is the time to understand more, so that we may fear less.” Her sage advice applies perfectly to discussions about the neuroscience of sex differences in 2019.

Larry Cahill is a professor in the Department of Neurobiology and Behavior at the University of California, Irvine and an internationally recognized leader on the topic of sex influences on brain function.

Footnote:  This video uses humor to look at sexual brains based on observed human behavior “Why Men and Women Think Differently.)