Recently former unsuccessful Presidential candidate and US Secretary of State John Kerry spoke at the Our Ocean Wealth Summit in Cork, Ireland. He missed seeing the boomerang on the accusation of his own lying, unless of course he no longer considers himself a world leader.  As we shall see, Kerry would have been better served by using the cork to shut up with his fear-mongering. The article is in Irish Examiner. Excerpts in italics with my bolds.

World leaders are lying to the public about the climate crisis and dismissing scientific evidence.

That was the stark warning from former US Secretary of State John Kerry who said the truth is not just being ignored but altered.

“Today we have public leaders who not only try to avoid the truth, but who try to alter it, through thousands of lies,” he said.

Mr Kerry was speaking after addressing a global oceans summit in Cork where he said the world and its climate do not have the time or space to deal with “presidents and prime ministers” who deny the truth about climate change.

However, he told delegates at the Our Ocean Wealth summit that the tide can be turned if governments face up to the truth and act faster.

Mr Kerry is leading a global effort to deliver more Marine Protected Areas but warned that humans are changing the chemistry of that oceans faster than it has been changed in the last 50m years.

“We can’t protect oceans without solving the problem of climate change and we can’t solve that without protecting the oceans — they go hand in hand,” he said.

“I believe we can do this. My frustration is that we are not doing what we know we can do. And time is not on our side.

While Kerry was talking Blarney in Ireland, Robert Murphy was laying down the Law in Connecticut.  Zero Hedge reported his remarks in an article What Universities Won’t Teach College Students About The Economics Of Climate Change. Excerpts in italics with my bolds.

[Authored by Robert Murphy via The Institute for Energy Research]

I recently gave a talk to a student group at Connecticut College on the economics of climate change. (The video is broken up into three parts on my YouTube channel: one, two, and three.) In this post I’ll summarize three of my main points:

(1) There is a huge disconnect between what the published economics research actually says about government policies to limit global warming, and how the media is reporting it.

(2) President Trump taking the U.S. out of the Paris Agreement doesn’t really affect anything on the margin, even if we stipulate the alarmist position on climate change. And

(3) If I’m wrong, and human-caused climate change really does pose a dire threat to humanity in the next few decades, then scientists are currently working on several lines of research of practical ways to actually deal with the problem.

The “Consensus Research” Does Not Justify Radical Political Intervention

To demonstrate just how wide the chasm is between the actual economics research and the media treatment of these issues, I described to the students the spectacle I observed back in the fall of 2018, when on the same weekend news came out that William Nordhaus had won the Nobel Prize for his pioneering work on the economics of climate change and that the UN released a “Special Report” advising governments to try to limit global warming to 1.5 degrees Celsius.

The media treatment (sometimes in the same story) presented these events with no sense of conflict or irony, leading regular citizens to assume that Nordhaus’ Nobel-winning work supported the UN’s goals for policymakers.

But that is not true at all. Here’s a graph from a 2017 Nordhaus publication that I included in my presentation: 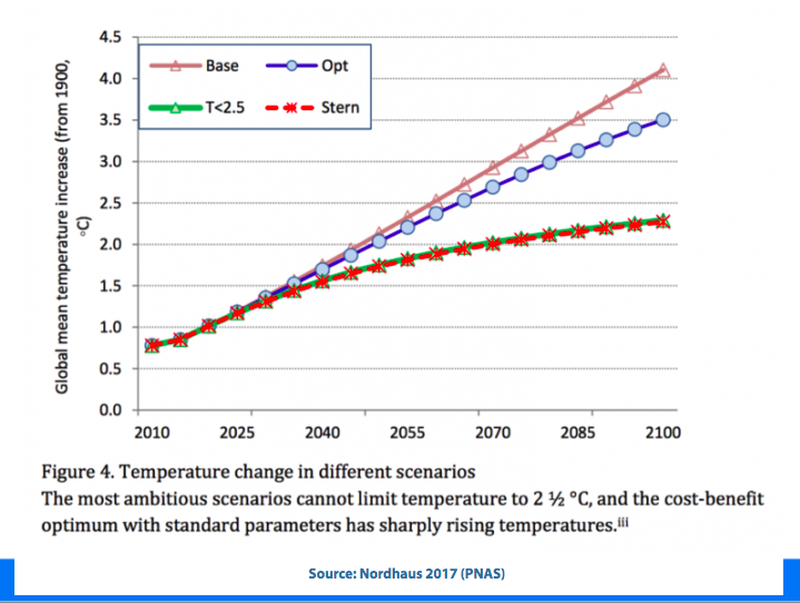 As the figure shows, Nordhaus’ model—and again, this isn’t cooked up by the Heritage Foundation, but instead was one selected by the Obama Administration’s EPA and was the reason he won the Nobel Prize—projects that if governments “did nothing,” total global warming would reach about 4.1 degrees Celsius. In contrast, if governments implemented the “optimal carbon tax,” as Nordhaus would recommend in a perfect world, then total warming would be about 3.5 degrees Celsius.

Anyone remotely familiar with the climate change policy debate knows that such an amount of warming would terrify the prominent activists and groups advocating for a political solution. They would quite confidently tell the public that warming of this amount would spell absolute catastrophe for future generations.

My point here isn’t to endorse Nordhaus’ model. My point is simply that Americans never heard anything about this when the media simultaneously covered Nordhaus’ award and the UN’s document calling for a 1.5°C limit. And yet, Nordhaus’ own work—not shown in the figure above, but I spell it out here—clearly concludes that such an aggressive target would cause far more damage to humans in the form of reduced economic output, that it would be better for governments to “do nothing” about climate change at all.

With or Without the United States, the Paris Agreement Was Going to “Fail”

To continue with the theme of how they’ve been misinformed, I reminded the students of the media’s apoplexy when Trump announced his intention to remove the United States from the Paris Climate Agreement (or treaty, in lay terms). I showed them a headline in which famed physicist Stephen Hawking said Trump was pushing the planet “over the brink.”

I then asked the students rhetorically, “You would think that the Paris Agreement was going to ‘work’ to contain the threat of climate change, except for Trump pulling out and wrecking it, right?” 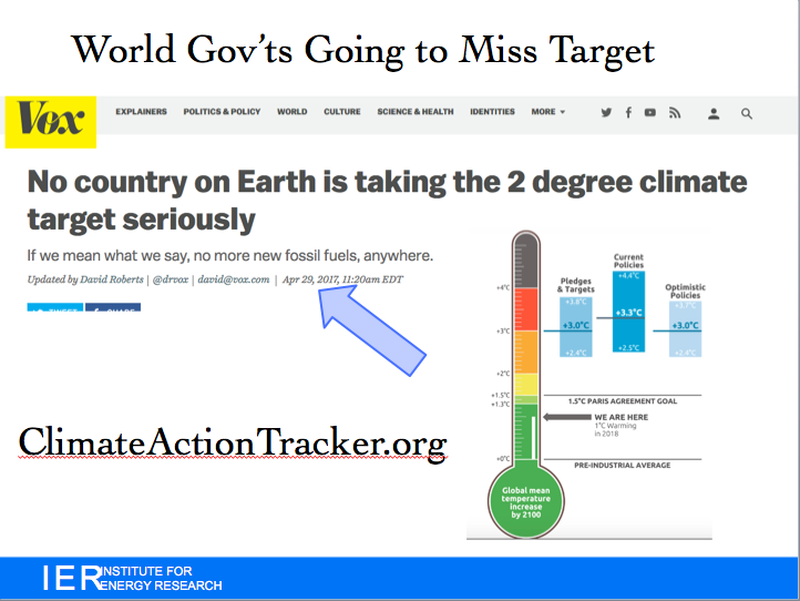 And yet, the pro-intervention group ClimateActionTracker.org nicely illustrates that even if all countries met their pledges (including the U.S.), it wouldn’t come close to limiting warming to the weaker benchmark of 2°C, let alone the newer, more chic target of 1.5°C. Things were even worse if we evaluated the actual policies of governments (as opposed to what they stated they intended to do, about limiting their emissions).

After spending so much time showing that the political “solutions” were failing even on their own terms, I summarized a few avenues of research (see this article for details) where scientists are exploring techniques to either remove carbon dioxide from the atmosphere or reflect some incoming sunlight. Although I personally do not think human-caused climate change is a crisis, and do think that adaptation coming from normal economic growth will be more than sufficient to deal with any problems along the way, nonetheless scientists do have these other techniques in their back pocket, should they become necessary to “buy humanity a few decades of breathing room” while technology advances in the transportation and energy sectors.

Americans, especially students, are being whipped into a panic over the allegedly existential threat of climate change. Yet the actual research, summarized in the UN’s own periodic reports and in the research of a Nobel laureate in the field, shows that at best only a modest “leaning against the wind” could be justified according to standard economic science.

By their own criteria, the alarmist activists are admitting that political measures are nowhere near achieving their goals. Their own rhetoric says that these activists are wasting everyone’s time pushing solutions that will end in catastrophe. Occasionally they slip up, as for example when Alexandria Ocasio-Cortez admits that her “we have 12 years left” was not to be taken literally.

In order to bring light to the climate change debate, at this point one just needs to actually screenshot and explain the evidence from the establishment sources. The rhetorical framing of the issue is so far removed from the underlying research that this alone is heretical. 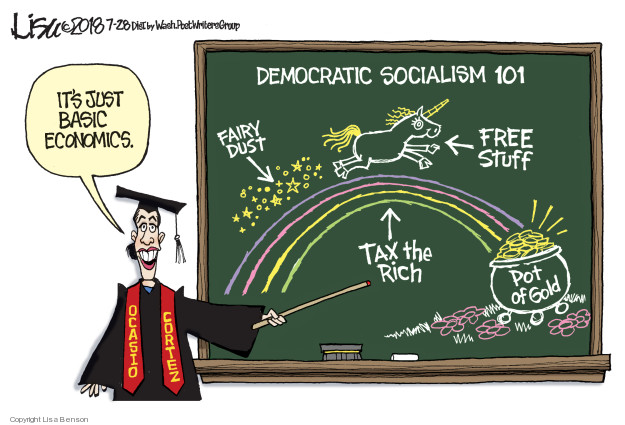