Patrick T. Brown writes at Quillette Empiricism and Dogma: Why Left and Right Can’t Agree on Climate Change. Excerpts initalics with my bolds.

Rather than thinking about the political divide on global warming as the result of dogma versus logic, a better explanation is that people tend to embrace conclusions—scientific or otherwise—that support themes, ideologies, and narratives that are preexisting components of their worldview. It just so happens that the themes, ideologies, and narratives associated with human-caused global warming and its proposed solutions align well with the political predispositions of the Left and create tension with those of the Right.

The definitional distinction between the political Right and the political Left originated during the French Revolution, and relates most fundamentally to the desirability and perceived validity of social hierarchies. Those on the Right see hierarchies as natural, meritocratic, and justified, while those on the Left see hierarchies primarily as a product of chance and exploitation. A secondary distinction, at least contemporarily in the West, is that those on the Right tend to emphasize individualism at the expense of collectivism and those on the Left prefer the reverse.

The most fundamental of these themes is the degree to which humanity itself can be placed at the top of the hierarchy of life on the planet. Those on the Right are more likely to privilege the interests of humanity over the interests of other species or the “interests” of the planet as a whole (to the degree that there is such a thing). On the other hand, those on the Left are more likely to emphasize a kind of pan-species egalitarianism and care for our shared environment, even if that means implementing policies that run counter to humans’ short-term interests.

Those on the Right are more likely to see the wealth of developed countries as rightfully earned by their own industriousness, while those on the Left are more likely to view the disproportionate wealth as fundamentally unjust and likely caused by exploitation. The idea that wealthy countries must therefore be penalized and made to subsidize poor countries is one that aligns well with the Left’s views about rebalancing unfairness. An accentuating factor is the Right’s tendency to favor national autonomy and therefore to oppose global governance and especially international redistribution.

Hierarchy narratives also help to determine political positions on the wealth of corporations and individuals. On the Right, oil and gas companies (as well as electric utilities that utilize fossil fuels) are held to be a product of innovation and a source of wealth creation; the smartest and most deserving people and organizations found the most efficient ways to transform idle fossil fuel resources into the power that runs society and, consequently, have greatly enhanced human wellbeing. For conservatives, it is therefore fundamentally unjust to blame those corporations and individuals that have done so much for human progress. The counter-narrative from the Left is that greedy corporations and individuals exploited natural resources for their own gain at the expense of the planet and the general public. They therefore support policies that blame and punish the fossil fuel industry in the name of cosmic justice and atonement.

Global warming is a tragedy of the commons, in which logical agents act in ways that run counter to the longterm interests of the group. These types of “collective-action problems” usually call for top-down government intervention at the expense of individual action and responsibility. Furthermore, the longterm nature of global warming demands acquiescence to collective action across generations. This natural alignment of the global warming problem with collectivist themes makes the issue much more palatable to the Left than the Right.

There is also the longstanding claim by those on the Right that the global warming issue is a Trojan Horse intended to bring about all manner of unrelated changes desired by the Left. Books like Naomi Klein’s This Changes Everything: Capitalism vs. The Climate and initiatives like the Green New Deal have done nothing to dispel this fear. For example, the Green New Deal Resolution includes the following proposals:

These objectives satisfy the Left’s policy goals. But, whatever the merits of those goals, it is not at all clear how they relate to global warming, if at all. 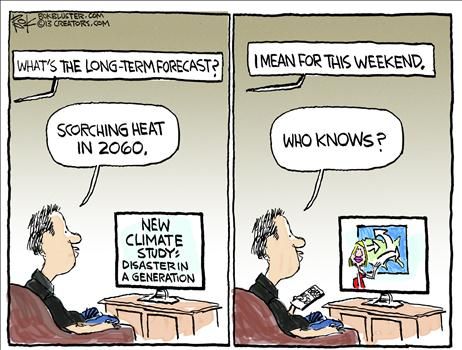 So, it should really not be particularly mysterious that opinions on global warming tend to divide along political lines. It is not because one side cleaves to dispassionate logic while the other remains obstinately wedded to political dogmatism. It is simply that the problem and its proposed solutions align more comfortably with the dogma of one side than the other. That does not mean, however, that the Left is equally out-of-step with the science of global warming as the Right. It really is the case that the Right is more likely to deny the most well-established aspects of the science. If skeptical conservatives are to be convinced, the Left must learn to reframe the issue in a way that is more palatable to their worldview.

Patrick T. Brown is an Assistant Professor in the Department of Meteorology and Climate Science at San Jose State University, California.

Comment: The analysis explains the predispositions of left and right toward the climate issue, but stops short of recognizing that doubters are motivated to seek contrary facts and information that contradict the climate suppositions. Those on the left already have massive social proof of their position, so little or no consideration of the technical facts is needed.  On the other hand, surveys show doubters tend to be more informed on the scientific research, having seen studies and findings not readily available in the biased mainstream media.