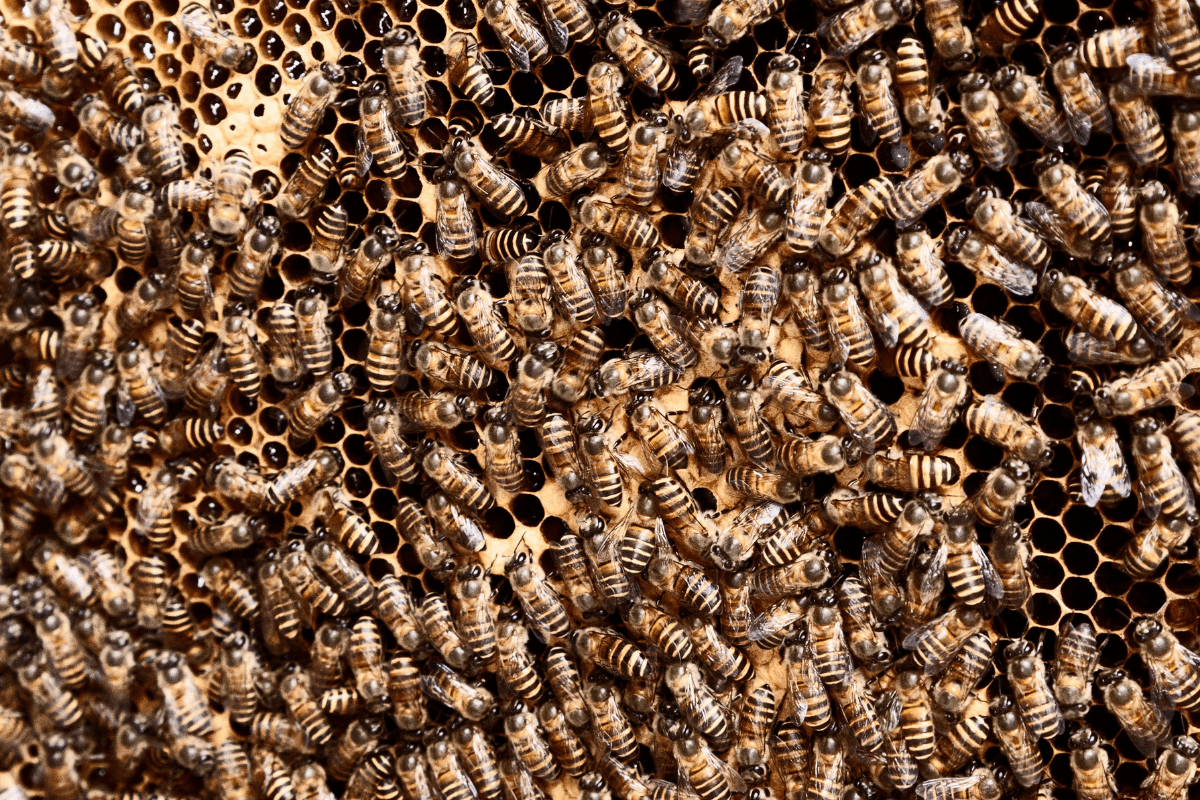 Jon Entine returns to this topic writing at the Genetic Literacy Project: The world faces ‘pollinator collapse’? How and why the media get the science wrong time and again. Excerpts in italics with my bolds.

As I and others have detailed in the Genetic Literacy Project and as other news organizations such as the Washington Post and Slate have outlined, the pollinator-collapse narrative has been relentless and mostly wrong for more than seven years now.

It germinated with Colony Collapse Disorder that began in 2006 and lasted for a few years—a freaky die off of bees that killed almost a quarter of the US honey bee population, but its cause remains unknown. Versions of CCD have been occurring periodically for hundreds of years, according to entomologists.

Today, almost all entomologists are convinced that the ongoing bee health crisis is primarily driven by the nasty Varroa destructor mite. Weakened honey bees, trucked around the country as livestock, face any number of health stressors along with Varroa, including the use of miticides used to control the invasive mite, changing weather and land and the use of some farm chemicals, which may lower the honeybee’s ability to fight off disease.

Still, the ‘bee crisis’ flew under the radar until 2012, when advocacy groups jumped in to provide an apocalyptic narrative after a severe winter led to a sharp, and as it turned out temporary, rise in overwinter bee deaths.

Colony loss numbers jumped in 2006 when CCD hit but have been steady and even improving since. 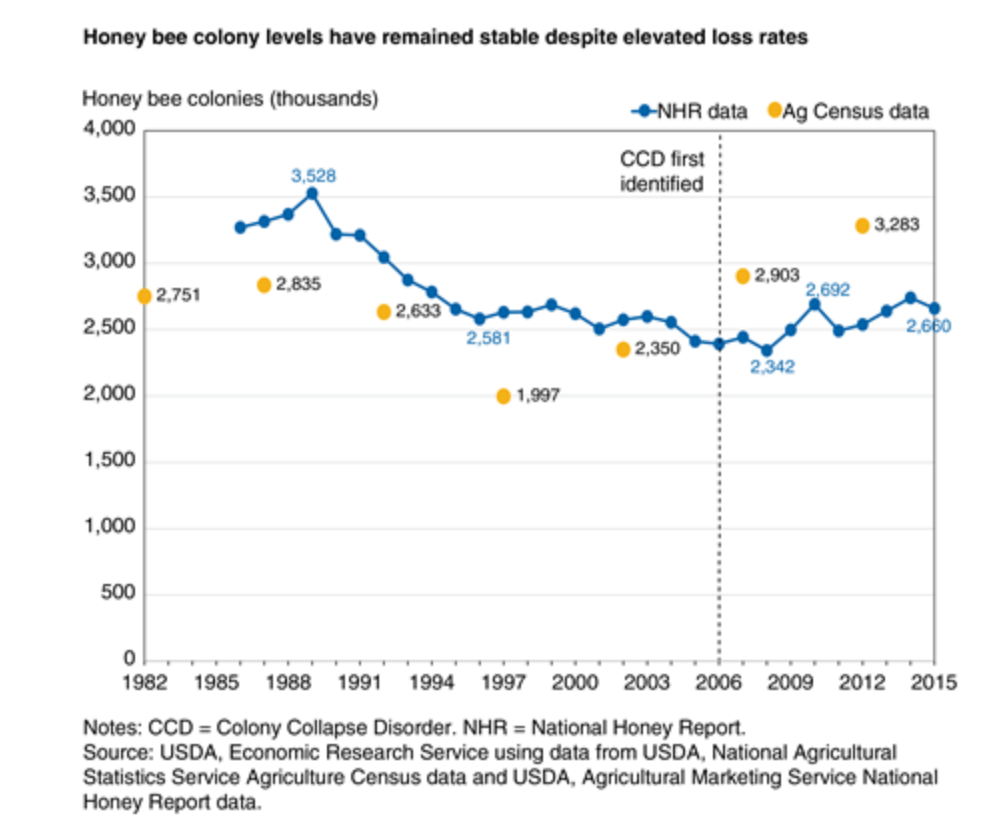 The alarm bells came with a spin, as advocacy groups blamed a class of pesticides known as neonicotinoids, which were introduced in the 1990s, well after the Varroa mite invasion infected hives and started the decline. The characterization was apocalyptic, with some activist claiming that neonics were driving honey bees to extinction.

In the lab evaluations, which are not considered state of the art—field evaluations replicate real-world conditions far better—honeybee mortality did increase. But that was also true of all the insecticides tested; after all, they are designed to kill harmful pests. Neonics are actually far safer than the pesticides they replaced, . . . particularly when their impact is observed under field-realistic conditions (i.e., the way farmers would actually apply the pesticide).

As the “science” supporting the bee-pocalypse came under scrutiny, the ‘world pollinator crisis’ narrative began to fray. Not only was it revealed that the initial experiments had severely overdosed the bees, but increasing numbers of high-quality field studies – which test how bees are actually affected under realistic conditions – found that bees can successfully forage on neonic-treated crops without noticeable harm.

Those determined to keep the crisis narrative alive were hardly deterred. Deprived of both facts and science to argue their case, many advocacy groups simply pounded the table by shifting their crisis argument dramatically. For example, in 2016, the Sierra Club (while requesting donations), hyped the honey bee crisis to no end.

But more recently, in 2018, the same organization posted a different message on its blog. Honeybees, the Sierra Club grudgingly acknowledged, were not threatened. Forget honeybees, the Sierra Club said, the problem is now wild bees, or more generally, all insect pollinators, which are facing extinction due to agricultural pesticides of all types (though neonics, they insisted, were especially bad).

So, once again, with neither the facts nor the science to back them up, advocacy groups have pulled a switcheroo and are again pounding the table. As they once claimed with honeybees, they now claim that the loss of wild bees and other insect pollinators imperils our food supply. A popular meme on this topic is the oft-cited statistic, which appears in the recent UN IPBES report on biodiversity, that “more than 75 per cent of global food crop types, including fruits and vegetables and some of the most important cash crops such as coffee, cocoa and almonds, rely on animal pollination.”

There’s a sleight of hand here. Most people (including most journalists) miss or gloss over the important point that this is 75 percent of crop types, or varieties, not 75 percent of all crop production. In fact, 60 percent of agricultural production comes from crops that do not rely on animal pollination, including cereals and root crops. As the GLP noted in its analysis, only about 7 percent of crop output is threatened by pollinator declines—not a welcomed percentage, but far from an apocalypse.

And the word “rely” seems almost purposefully misleading. More accurately, most of these crops receive some marginal boost in yield from pollination. Few actually “rely” on it. A UN IPBES report on pollinators published in 2018 actually breaks this down in a convenient pie graph.

Many of these facts are ignored by advocacy groups sharpening their axes, and they’re generally lost on the “if it bleeds it leads” media, which consistently play up catastrophe scenarios of crashing pollinator communities and food supplies. Unfortunately, many scientists willingly go along. Some are activists themselves; others hope to elevate the significance of their findings to garner media attention and supercharge grant proposals.

As John Adams is alleged to have said, ‘facts are stubborn things.’ We can’t be simultaneously in the midst of a pollinator crisis threatening our ability to grow food and see continually rising yield productivity among those crops most sensitive to pollination.

With these claims of an impending wild bee catastrophe, as in the case of the original honeybee-pocalypse claims, few of the journalists, activists, scientists or biodiversity experts who regularly sound this ecological alarm have reviewed the facts in context. Advocacy groups consistently extrapolate from the declines of a handful of wild bee species (out of the thousands that we know exist), to claim that we are in the midst of a worldwide crisis. But just as with the ‘honey bee-mageddon, we are not.

Those of us who actually care about science and fact, however, might note the irony here: It is precisely the pesticides which the catastrophists are urging us to ban that, along with the many other tools in the modern farmer’s kit, have enabled us grow more of these nutritious foods, at lower prices, than ever before in human history.