The image shows Arctic ice thinning at the edges in the last 12 days up until day 249, when it appears to stabilize.  This would be an earlier minimum than average but comparable to some other years, including 2018.

The melting season in August and September up to yesterday shows 2019 below average but appearing to consolidate in the last few days. 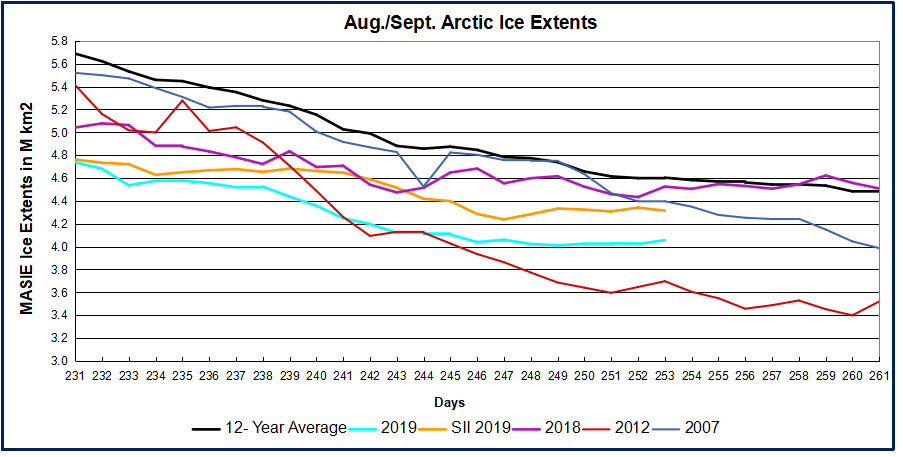 Presently 2019 ice extent according to MASIE is 547k km2 below the 12 year average, having been 807k km2 in deficit just 7 days ago. The pace in recent days has flattened in comparison to the average, and is now matching where 2007 bottomed out. Another surprise is SII showing much more (~300k km2) ice extent than MASIE, and an even earlier bottom on day 247 compared to 249 for MASIE.  Note also that MASIE 2018 daily minimum was day 252.

It is also the case that most all regions have registered their 2019 minimums prior to day 253.  And as discussed below, the marginal basins have little ice left to lose.

We are close to the annual Arctic ice extent minimum, which typically occurs on or about day 260 (mid September). Some take any year’s slightly lower minimum as proof that Arctic ice is dying, but the image below shows the second week in September over the last 11 years. The Arctic heart is beating clear and strong.

These are weekly ice charts from AARI in St. Petersburg.  The legend says the brown area is 7/10 to 10/10 ice concentration, while green areas are 1/10 to 6/10 ice covered. North American arctic areas are not analyzed in these images.  Note how the distribution of sea ice varies from year to year, and how small was the extent after the 2012 Great Arctic cyclone.

Over this decade, the Arctic ice minimum has not declined, but since 2007 looks like fluctuations around a plateau. By mid-September, all the peripheral seas have turned to water, and the residual ice shows up in a few places. The table below indicates where we can expect to find ice this September. Numbers are area units of Mkm2 (millions of square kilometers).

The table includes three early years of note along with the last 5 years compared to the 12 year average for five contiguous arctic regions. BCE (Beaufort, Chukchi and East Siberian) on the Asian side are quite variable as the largest source of ice other than the Central Arctic itself.   Greenland Sea and CAA (Canadian Arctic Archipelago) together hold almost 0.5M km2 of ice at annual minimum, fairly consistently.   LKB are the European seas of Laptev, Kara and Barents, a smaller source of ice, but a difference maker some years, as Laptev was in 2016.  Baffin and Hudson Bays are inconsequential as of day 260.

For context, note that the average maximum has been 15M, so on average the extent shrinks to 30% of the March high before growing back the following winter.