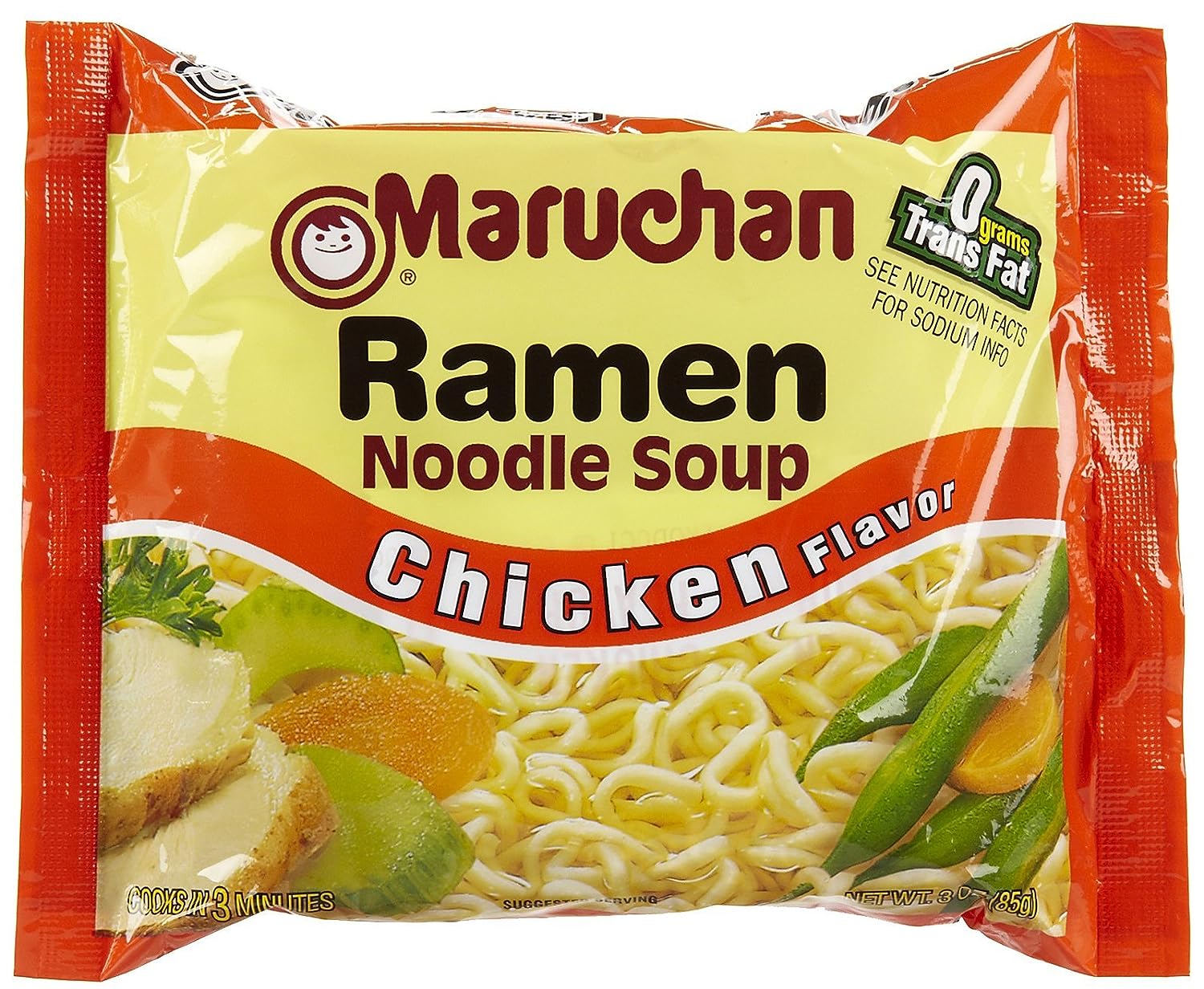 When the Raman effect came up last year in relation to GHGs (Greenhouse Gases), I was firstly confused thinking it was talk of asian noodles.  So I have had to learn more, and while the effect is real and useful, I doubt it is a factor concerning global warming/climate change.  This post provides information principally from two sources consistent with many others I read.

One article is Raman Spectroscopy from University of Pennsylvania.  Excerpts in italics with my bolds.

The laser light is used because it is a very intense beam of nearly monochromatic light that can interact with sample molecules. When matter absorbs light, the internal energy of the matter is changed in some way. Since this site is focused on the complementary nature of IR and Raman, the infrared region will be discussed. Infrared radiation causes molecules to undergo changes in their vibrational and rotational motion. When the radiation is absorbed, a molecule jumps to a higher vibrational or rotational energy level. When the molecule relaxes back to a lower energy level, radiation is emitted. Most often the emitted radiation is of the same frequency as the incident light. Since the radiation was absorbed and then emitted, it will likely travel in a different direction from which it came. This is called Rayleigh scattering. Sometimes, however, the scattered (emitted) light is of a slightly different frequency than the incident light. This effect was first noted by Chandrasekhara Venkata Raman who won the Nobel Prize for this discovery. (6) The effect, named for its discoverer, is called the Raman effect, or Raman scattering.

The reason for this is that very few molecules would exist in the excited level as compared to the ground state before the absorption of radiation. The diagram shown represents electronic energy levels as shown by the labels “n=”. The same phenomenon, however, applies to radiation in any of the regions.

Another article is Raman Techniques: Fundamentals and Frontiers by Robin R. Jones et al. at 2019 at US National Library of Medicine.

Driven by applications in chemical sensing, biological imaging and material characterisation, Raman spectroscopies are attracting growing interest from a variety of scientific disciplines. The Raman effect originates from the inelastic scattering of light, and it can directly probe vibration/rotational-vibration states in molecules and materials.

Despite numerous advantages over infrared spectroscopy, spontaneous Raman scattering is very weak, and consequently, a variety of enhanced Raman spectroscopic techniques have emerged.

These techniques include stimulated Raman scattering and coherent anti-Stokes Raman scattering, as well as surface- and tip-enhanced Raman scattering spectroscopies. The present review provides the reader with an understanding of the fundamental physics that govern the Raman effect and its advantages, limitations and applications. The review also highlights the key experimental considerations for implementing the main experimental Raman spectroscopic techniques. The relevant data analysis methods and some of the most recent advances related to the Raman effect are finally presented. This review constitutes a practical introduction to the science of Raman spectroscopy; it also highlights recent and promising directions of future research developments.

When light interacts with matter, the oscillatory electro-magnetic (EM) field of the light perturbs the charge distribution in the matter which can lead to the exchange of energy and momentum leaving the matter in a modified state. Examples include electronic excitations and molecular vibrations or rotational-vibrations (ro-vibrations) in liquids and gases, electronic excitations and optical phonons in solids, and electron-plasma oscillations in plasmas [108].

The transition from the virtual excited state to the final state can occur at any point in time and to any possible final state based on probability. Hence, spontaneous Raman scattering is an incoherent process. The output signal power is proportional to the input power, scattered in random directions and is dependent on the orientation of the polarisation. For example, in a system of gaseous molecules, the molecular orientation relative to the incident light is random and hence their polarisation wave vector will also be random. Furthermore, as the excited state has a finite lifetime, there is an associated uncertainty in the transition energy which leads to natural line broadening of the wavelength as per the Heisenberg uncertainty principle (∆E∆t ≥ ℏ/2) [1]. The scattered light, in general, has polarisation properties that differ from that of the incident radiation. Furthermore, the intensity and polarisation are dependent on the direction from which the light is measured [1]. The scattered spectrum exhibits peaks at all Raman active modes; the relative strength of the spectral peaks are determined by the scattering cross-section of each Raman mode [108]. Photons can undergo successive Rayleigh scattering events before Raman scattering occurs as Raman scattering is far less probable than Rayleigh scattering.

Coherent light-scattering events involving multiple incident photons simultaneously interacting with the scattering material was not observed until laser sources became available in the 1960s, despite predictions being made as early as the 1930s [37, 38]. The first laser-based Raman scattering experiment was demonstrated in 1961 [39]. Stimulated Raman scattering (SRS) and CARS have become prominent four-wave mixing techniques and are of interest in this review. 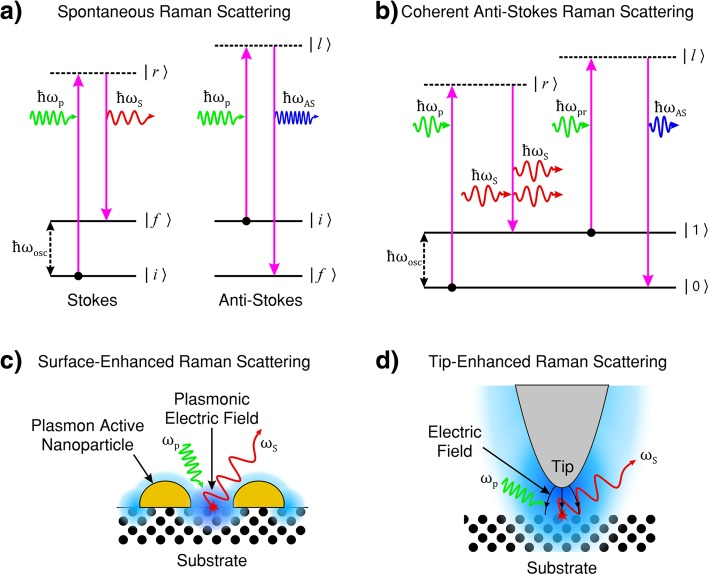 SRS is a coherent process providing much stronger signals relative to spontaneous Raman spectroscopy as well as the ability to time-resolve the vibrational motions.

Raman is generally a very weak process; it is estimated that approximately one in every 10^8 photons undergo Raman scattering spontaneously [6]. This inherent weakness poses a limitation on the intensity of the obtainable Raman signal. Various methods can be used to increase the Raman throughput of an experiment, such as increasing the incident laser power and using microscope objectives to tightly focus the laser beam into small areas. However, this can have negative consequences such as sample photobleaching [139]. Placing the analyte on a rough metal surface can provide orders of magnitude enhancement of the measured Raman signal, i.e. SERS.

It seems to me that spontaneous scattering is the only possible way that the Raman effect could influence the radiative profile of the atmosphere.  Sources like those above convince me that lacking laser intensity, natural light does not produce a Raman effect in the air of any significance for it to be considered a climate factor.