David Farragut was an officer in the Union navy in the Civil War. Warned of mines, called torpedoes, in the water ahead, Farragut said, “Damn the torpedoes! Captain Drayton, go ahead! Jouett, full speed!”  This is a reasonable comparison to what we hear from climatists these days.  The hype is amped up, heedless of immutable, immovable facts sitting in the way of their green pathway. Some recent examples below.

Stop making sense: why it’s time to get emotional about climate change is an article at (where else?) The Guardian by Rebecca Huntley, an Australian social researcher. Excerpts in italics with my bolds.

What I am saying is that now the climate science has been proven to be true to the highest degree possible, we have to stop being reasonable and start being emotional.

t took me much longer than it should have to realise that educating people about climate change science was not enough. Due perhaps to my personality type (highly rational, don’t talk to me about horoscopes, please) and my background (the well-educated daughter of a high school teacher and an academic), I have grown up accepting the idea that facts persuade and emotions detract from a good argument.

For environmental activists in these less-polarised countries – often countries already feeling serious impacts from climate change but emitting negligible amounts of CO2 –the endless debate about the truth of the climate science in the big western countries is gobsmacking. Activists have expressed their frustration and disbelief, and it’s contributed not a little to their despair about progress at an international level.

When social researchers like me try to analyse how a person responds to climate change messages the way they do, we’re measuring much, much more than just their comprehension (or not) of the climate science. We’re analysing the way they see the world, their politics, values, cultural identity, even their gender identity. It wouldn’t be a stretch to say we’re measuring their psyche, their innermost self.

Given that climate change is such a discomforting topic, I see this cognitive dissonance all the time in focus groups, where people try to find reasons other than climate change for the events happening around them, even when faced with a strong scientific explanation. They pick it apart because of Dunning-Kruger and then, because of confirmation bias, try to find a blog that states something other than what the scientific evidence shows.

I’m not saying facts don’t matter or the scientific method should be watered down or we should communicate without facts. What I am saying is that now the climate science has been proven to be true to the highest degree possible, we have to stop being reasonable and start being emotional.

Comment:  Note that climate is no longer an earth science, but a branch of environmental sociology.  This is the logical endpoint of “Climate Change” existing as a double abstraction.  Consider that “climate” is an human construct, defined as the pattern of weather we remember in our living space over seasons and years. And “climate change” is therefore an added belief that our expectations about future weather are uncertain and unreliable. Objective realism is overturned in favor of majority opinion.  Everyone believes as Obama tweeted: “Ninety-seven percent of scientists agree: climate change is real, man-made and dangerous.”  So the effort is to find out what is wrong with the dissenters and fix them, so we can get on with the program.

Facebook Must Stop the Spread of Climate Misinformation is a letter sent to the Facebook Oversight Board by a number of climatists.  Excerpts in italics with my bolds.

Facebook is allowing the spread of climate misinformation to flourish, unchecked, across the globe. Instead of heeding the advice of independent scientists and approved fact-checkers from Climate Feedback, Facebook sided with fossil fuel lobbyists by allowing the CO2 Coalition to take advantage of a giant loophole for “opinion” content. The loophole has allowed climate denial to fester by labeling it “opinion,” and thus, avoiding the platform’s fact-checking processes.

Facebook knows how to take action against misinformation. When COVID-19 denial took hold on the platform, it was forcibly shut down because Facebook understood that the spread of COVID-19 misinformation could cause imminent physical harm to the health and well-being of Facebook users. Climate denial and misinformation are also deadly. By allowing climate misinformation to go unchecked,

Facebook is actively putting the health and well-being of our nation’s most vulnerable low-income communities and communities of color at risk.

You and the Oversight Board must step in and enact the same standard for the denial of climate change as you did for COVID-19 misinformation. 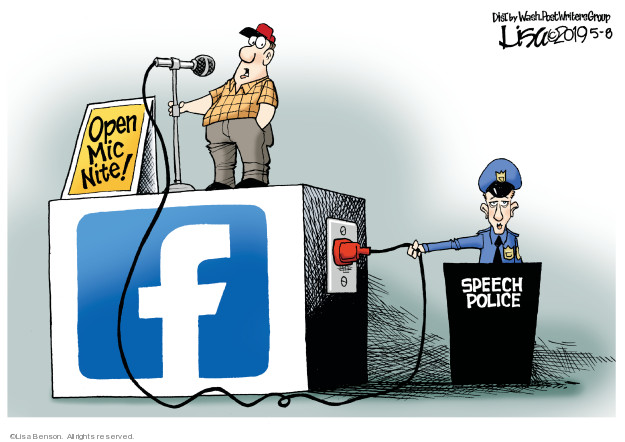 The integrity of the Oversight Board is at risk. Mark Zuckerberg has refused to recognize that he must get the facts right on climate, and refused to acknowledge that climate denial on his platform is as dangerous a threat to future generations as any.

Response of the CO2 Coalition to calls for Facebook censorship

Statement by CO2 Coalition Chair Patrick Moore and Executive Director Caleb Stewart Rossiter on the Abrams-Steyer letter asking Facebook to shut down the Coalition’s page and censor its articles on other pages.  Excerpts in italics with my bolds

Climate Power 2020 recently published a letter signed by former gubernatorial candidate Stacey Abrams, former presidential candidate Tom Steyer, and 13 leaders of groups working to ban the fossil fuels that are the source of over 80 percent of U.S. and world energy.

The letter calls on Facebook to shut down the page of the CO2 Coalition of 55 climate scientists and energy economists, and to censor posts of its members studies and articles on other users’ pages.

The CO2 Coalition is proud to be the target of this letter, whose signatories represent alarmist organizations that routinely publish scientific and economic misinformation about climate change and energy options. The letter, like Facebook’s efforts to censor our posts and articles, is a badge of honor for our atmospheric physicists, climatologists, and statisticians’ recent publications about how computerized climate models that project future temperatures work – and don’t work.

As E & E News recently wrote in its coverage of Facebook’s censoring of our opinions on climate models, these mathematical models “are the foundation used to craft many carbon regulations.” The 2009 EPA Greenhouse Gas Endangerment finding that has led to increased energy prices for businesses and households is entirely based on computerized temperature models that have since proven incorrect. The CO2 Coalition publishes studies and articles explaining that these models are adjustable projections rather than oracles. When tested after a few years against actual temperatures, the UN model projections have proved to run three times too hot. It is these publications that Facebook has been censoring.

The UN IPCC and U.S. government scientific agencies agree that their data show no statistically significant increases in rates of sea-level rise, hurricanes, floods, wildfires, and other dangerous or damaging weather in the 70 years since carbon dioxide emissions became a factor in global temperature.

The failure of the alarmists’ predictions in these areas – and in this letter they simply ignore the UN consensus – has increased the importance of modeled projections of future temperatures in justifying calls to end the use of the fossil fuels. Hence, these recent attacks on our explanations of why those modeled projections are by their nature too unlikely and uncertain to use as a basis for policies that will make energy around the world far less reliable and far more costly.

The movement of heat in the atmosphere and oceans is complex, with major contributions from both chaos and poorly-understood, decades-long cycles. As a result, the models require the input of thousands of guesses about mathematical values for key processes. As Oxford physicist Fred Taylor says in his textbook, Elementary Climate Physics, the models are “opaque” and “in their infancy.”

The letter labels our members as “climate deniers.” We ask each of the 15 signatories to Climate Power 2020’s letter to identify a single denial of a scientific or economic fact in our publications or public statements. Surely some of the answers will involve climate models. Even though model projections are more opinion than fact, more mathematical art than physical science, we look forward to such a debate.

And since we are asking for the signatories’ critiques, we will provide one ourselves. One of the letter’s signers is the president of the Union of Concerned Scientists. For 15 years the Union of Concerned Scientists has refused to discuss or publicly debate the science of its alarmist narrative and the economics of its subsidy-rich calls for transportation and electricity powered by what it calls “renewable” wind and solar energy. Mining, shipping, refining, construction, transmission, and disposal of the infrastructure of these intermittent sources of power is almost entirely fossil-fueled and so hardly renewable. Wind and solar are also four times more expensive than natural gas-fired electricity and gasoline transportation.

We invite this group, or any of the others involved in the Abrams-Steyer letter, to join us in debate at one of our upcoming congressional presentations of our research.

For the history of alarmists losing in formal public debates, see We are Ignored, then Dissed, then Debated, then We Win.

When they say, climate change/global warming is not up for debate, they mean proponents have stopped debating.